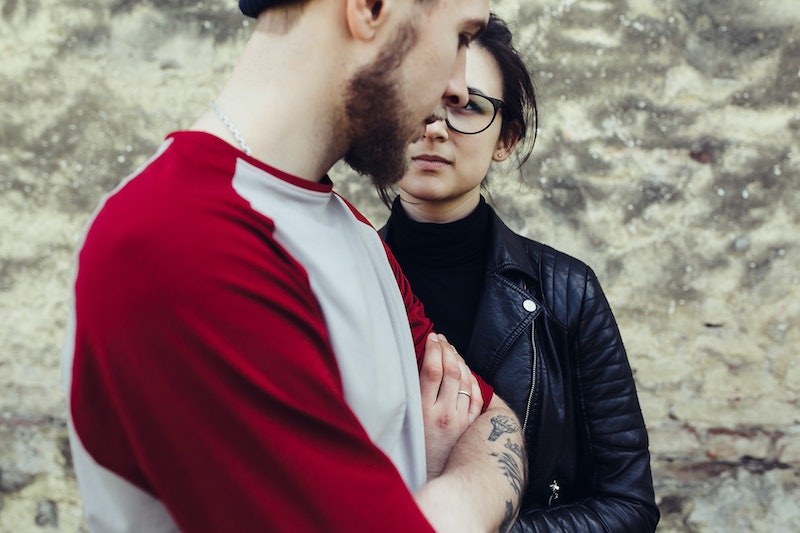 If you’re thinking that your relationship needs a break, then you’re having a thought that many people have at some point. Whether it’s a break from a job, a friendship, a relationship, or even a break from the same old coffee shop you’ve been going to for three years, one morning you might wake up and realize it’s time to take a breather. This doesn’t mean you want to break up; it just means you need a break. It’s a totally normal feeling to have.

“If it’s early in the relationship, taking a break for a month could be a good thing,” Love Biologist and Professor Dawn Maslar, M.S. tells Bustle. “During that month apart, there’s an increased chance of falling in love because dopamine creates yearning.”

But while taking a break from your relationship, according to some professionals, is a definitely a good idea, there needs to be some rules involved, as well as an understanding as to what the break means, how long it should be, and what you hope to accomplish by taking the break. You don’t want to get into the habit of taking breaks over and over again, as some means to fix things that you clearly haven’t tried to fix during past breaks.

“Part of the reason some couples make up and break up so often is because they don't give themselves time to get used to being without each other,” Dating Coach Francesca Hogi tells Bustle.

So are you ready? Is this something you want to try? Here are seven signs it’s time to take a break from your relationship.

1. You’re Easily Annoyed By Your Partner (Like More Than Usual)

Eventually, with anyone, you’re bound to get annoyed by them. It’s not their fault or your fault, but simply that sometimes our tolerance for what we have in our lives every day just drops — or completely disappears. But the thing with annoyance is that it’s also indicative of other factors, like not getting your needs met or feeling supported, among other things that prove that you’re actually being emotionally drained by your partner. It’s exhausting; so taking a break would actually be like taking a vacation. Vacations are great.

There are so many reasons why couples might not be having sex. From stress to depression to a libido that’s been decreased due to certain medication — it can be anything. But if you and your partner can’t pinpoint an exact reason as to why you’re not getting it on, then that tells you something. And that something may be that you’re just not really into each other right now — which is totally fine! — but also can mean that maybe you need a break. As to whether or not that break will include you two sleeping with other people, however, is a totally different story. That would be one of those rules that needs to be established.

3. You Feel A General Indifference Toward Your Partner

It’s important to realize the difference between being bored in your relationship and being indifferent. Boredom is an actual feeling, like annoyance, but indifference is the opposite; indifference is feeling nothing at all. It’s also a major sign.

4. Your Arguments Have Gone From Legit To Petty

In the least surprising thing you’ll read today, all couples fight. In fact, couples who don’t fight are, I imagine, ticking time bombs or those types of couples who only exist in movies. But while arguing is normal and healthy, especially if it’s done in a productive and fair way, petty arguments (HOW COULD YOU EAT THE LAST COOKIE, YOU HORRIBLE PERSON!) are suggesting that things aren’t going so great and a time out might be necessary.

5. You No Longer Care About Resolution

Happy couples know how to reach resolution. Just like couples with healthy sex lives know how to resolve things (then, perhaps, have some makeup sex). Couples that need a break don’t give a damn about resolution. Why resolve something if you don’t feel all that invested in it?

6. You Need More Space Than You’re Getting

Healthy relationships are ones in which the partners give each other space. Although human beings are social creatures by nature, that doesn’t mean we can handle being constantly around the same person 24/7 without going a little mad. Relationships need space; it’s absolutely essential. But if the space you’re getting isn’t enough or you’re not even getting any space at all, then it’s time to step back from the situation.

7. You’re Seriously Questioning The Future Of Your Relationship

“When a couple takes a break in a relationship, it’s usually because one person isn’t sure about the value of the future of the relationship,” Author and Relationship Expert April Masini tells Bustle. “The break is either to clear his or her head, test the waters and see what else is out there, see if the partner is missed on the break, or use the break as a slow advance to a full on break up.”

Although there’s no guarantee that a break will definitely lead to a breakup, if that’s what taking a break results in, then it was already in the cards. You can’t live day in and day out miserably wondering if this relationship is going to work, without taking a risk by taking a break. If you end up breaking up, then you’ll know you broke up for a reason.