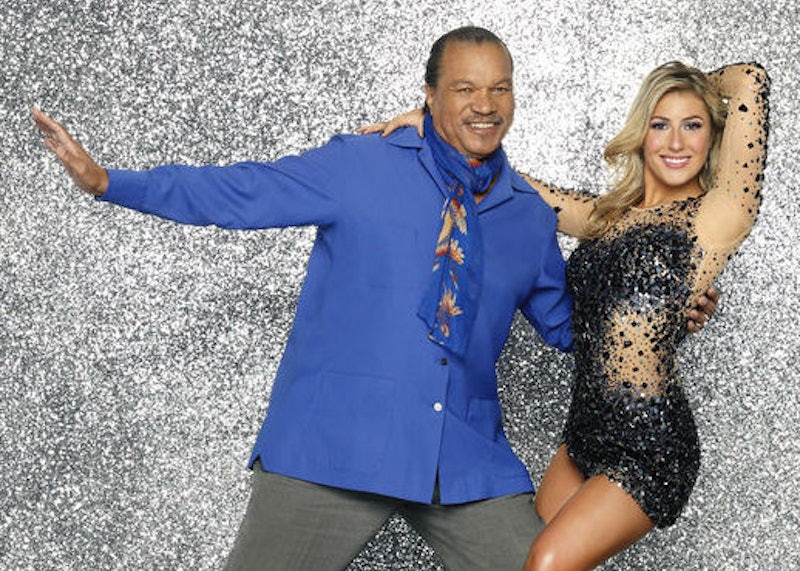 There must be something in the water supply over at Dancing With the Stars because during Monday night's premiere, we experienced something of a Star Wars fever dream, complete with laser sounds (pew-pew), slave costumes, and the disco version of the Star Wars soundtrack that hardcore fans have been trying to forget existed since the '70s.

And this overwhelming jumble of references to George Lucas' famous trilogy (some of us don't count the Hayden Christensen years as canon) is a real thing that happened thanks to DWTS Season 18 recruit Billy Dee Williams, who appears to be this season's Bill Nye.

Last season, when Nye proved his dancing abilities weren't quite up to snuff, he was thrown head first into a campy lab setting with bubbling sounds and goofy affects. Now, with his Lando Calrissian days far behind him, Williams is the victim of DWTS belated punishment for his part in Han Solo's temporary demise at the end of The Empire Strikes Back (hell, they even made him wear his old costume). This campy Star Wars romp was just a little too much for any sci-fi-loving mind to bear, but unlike Bruno, we're not going to hold it against Williams this time. This glittery disco dance was clearly the work of the dark side.

Here are the nine weirdest things that happened when Lando— er, Billy Dee took the stage.

Work it, I guess?

Then Billy Dee Was Like, This is My Moment, R2

Lando Is Back, With Pelvic Thrusts

That hurts me right in the childhood.

Then Lando and Princess Leia Play Pattycake Like Nothing Ever Happened

Have you no shame, Princess Leia? You're not even wearing the right hair-do with that slave costume. You're mixing references and you're cavorting with the guy who threw your hunky smuggler into a freezing chamber that could have killed him. Sure, he helped get him out, but only out of guilt. Cease this pattycake nonsense immediately before the collective minds of Star Wars fans everywhere explode.

The Storm Troopers Got Into The Groove...

Everything else has gone to hell, why not add some Storm Troopers?

And Then They Shoot Princess Leia?

One minute she's dancing, the next minute these guys are pointing guns (complete with accompanying laser sound effects) and the Princess is limp. Have you no shame, DWTS? The answer is clearly no, they have no shame because...

There were ewoks in the audience cheering Lando on

And DWTS even translated their grunts for us.

Once the dance was over, it was a rush to see who could drop the most Star Wars references. Bruno wins for quantity: he growled at Williams for freezing Han Solo, then asked him to dance like Darth Vader. So he wants him to clomp around in over-sized boots and strangle people with his mind? Sure, Bruno. Sure.

But hey, at least Lando Was Enjoying Himself

He looks pretty happy. And he didn't even need to have one of those Colt 45s he used to hawk in the '80s.