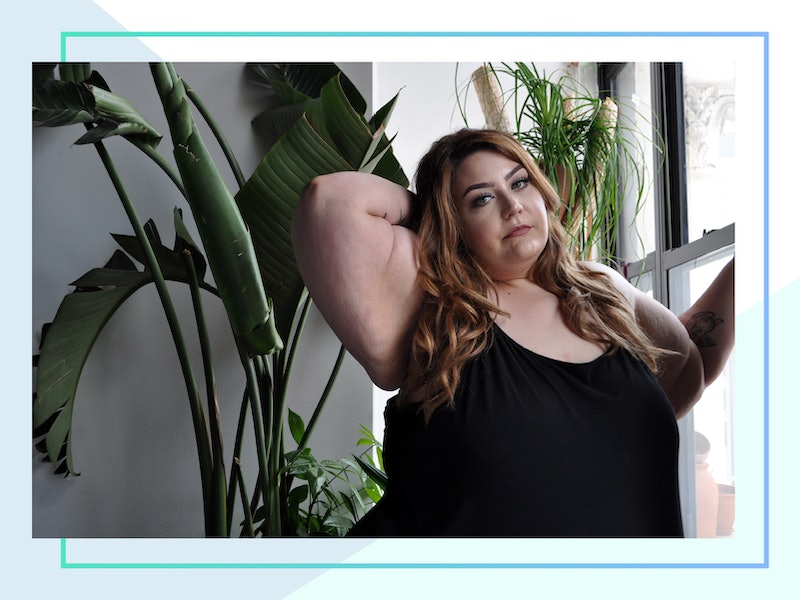 With award-winning photographer Substantia Jones of The Adipositivity Project, Bustle is launching A Body Project . A Body Project aims to shed light on the reality that "body positivity" is not a button that, once pressed, will free an individual from the horrors of beauty standards. Even the most confident of humans has at least one body part that they struggle with. By bringing together self-identified body positive advocates, all of whom have experienced marginalization for their weight, race, gender identity, ability, sexuality, or otherwise, we hope to remind folks that it's OK to not feel confident 100 percent of the time, about 100 percent of your body. But that's no reason to stop trying.

Linni Rutledge walks into the room of the downtown Manhattan apartment where she'll be photographed. Despite the festering heat of the mid-summer morning in NYC, her makeup hasn't melted off at all. She's ready to take center stage. "So should I start getting naked?" Rutledge asks shortly after saying her initial hellos. "I have no problem changing in front of people."

There's an air of confidence to the makeup artist and body positivity advocate that many folks still assume is (or should be) absent in fat women at large. At a size 3X on the top and a 4X/26 on the bottom, Rutledge is visibly plus size. But she's not trying to hide that fact. "I knew going into this shoot with Substantia that I wanted to bare my body," she tells me later. "It was never a question of, 'I wonder if this will look good.' I thought, I want to be as authentic as I can."

Although showcasing a stripped-down version of herself, cute undies and a very simple tank top included, was easy for Rutledge that day, this wouldn't have always been the case. "I've felt very stigmatized, especially when I was younger," she says. "Not necessarily by people but by societal standards." In particular, it was her arms that caused her the most strife regarding her body image: Arms that she felt "rippled and overhung" disproportionately to the rest of her body.

Going shopping with friends was especially triggering for a younger Rutledge. Even in 2016 — post the plus size blogging revolution — walking into an actual brick and mortar store that carries sizes above a 14, let alone above a 20, is rarely achievable. Flashing things back to a pre-2010 era, the world of plus size fashion was largely a sea of mumus, tunics, kaftans, boot-cut jeans, and A-line skirts. So if a retailer did actually carry Rutledge's size, the clothing was "matronly and very unfashionable," she muses. "It translated to me that I wasn't good enough for society."

Although she would never tell her friends of how defeated she felt — seemingly reluctant to play into sad fat girl narratives and internalize even more fatphobia — her confidence was impacted by the belief that she wasn't good enough to experience cute clothing.

She remembers a specifically off-putting shopping experience that contributed to her issues with her arms: "When I was 16, a woman at a boutique who was helping me find an dress told me I should hide me arms because they were my 'problem area.' It stuck with me for a long time."

Unlike a lot of body positivity advocates, however, Rutledge doesn't feel the need for every store to carry every size. Not yet, anyway. Instead, she thinks that it's important to prioritize the individuals most affected by prejudices like sizeism, so that even if society and fashion and media are slow to catch onto tolerance, the people themselves can find a way to be OK.

"Society is still so focused on the praise of those who are thin, or who got thin through dieting," Rutledge tells me. "[But] being thin does not make you 'better.' The best advice I can give anyone of any size is to stop caring what people think."

It's easier said than done, of course. Although it's often considered "cool" and "edgy" to eschew the opinions of others, doing so when you're in a body believed to be inferior and ugly usually isn't met with the same praise. Rutledge believes that faking it until you make it is important, though.

"The reality of body positivity isn't that I have accepted my flaws and I'm always confident," she tells me. "There are days when I have a hard time at the beach, or at a social event when I'm wearing a sleeveless dress. But I don't hide my arms, even when I'm feeling self-conscious." She does the exact opposite, in fact — reminding herself along the way that confidence shouldn't be dependent on appearance alone, regardless of the size you are. If we keep prioritizing looks, even within communities of acceptance, we'll only ever keep crafting different beauty standards.

Although Rutledge, overall, considers herself to be a confident adult, not every day is a perfect body image day. Working in the beauty industry makes being surrounded by traditional tropes of acceptability impossible to escape. "When I first started [working as a makeup artist], I would show up with tons of makeup on, hair blown out, dressed nice but uncomfortably, just because I wanted to fit in so badly," she says. "I still feel that need on set to look good [...] The feeling that I need to look good to partake in the beauty industry, even working in the background, is very real."

But this is where "faking it until you make it" comes in. "If you're confident in the way you look," — even if you don't feel it — "people aren't going to question it."

Like so many believers of body positivity, one way Rutledge channels confidence is through the magic of the selfie. "If someone is feeling beautiful enough to take a photo and post it on social media, that's confidence," she says. "Professional photography and photoshoots have [also] brought out a lot of confidence in myself. You can really learn to love your body by seeing it through a different angle, or the way someone else views you."

Many folks are quick to target the Millennial generation for our narcissistic tendencies as manifested through practices like taking selfies or regularly participating in photoshoots. But if something empowers you — if something makes you feel a little less othered or imperfect — then its merit is undeniable.

After shooting with Jones, for example, Rutledge "felt very powerful and graceful," she tells me. "After I left, that feeling stayed with me." Finding ways to preserve that feeling in the face of a world that'll still insist on telling you that you don't deserve the emotion in the first place... well, that's key.