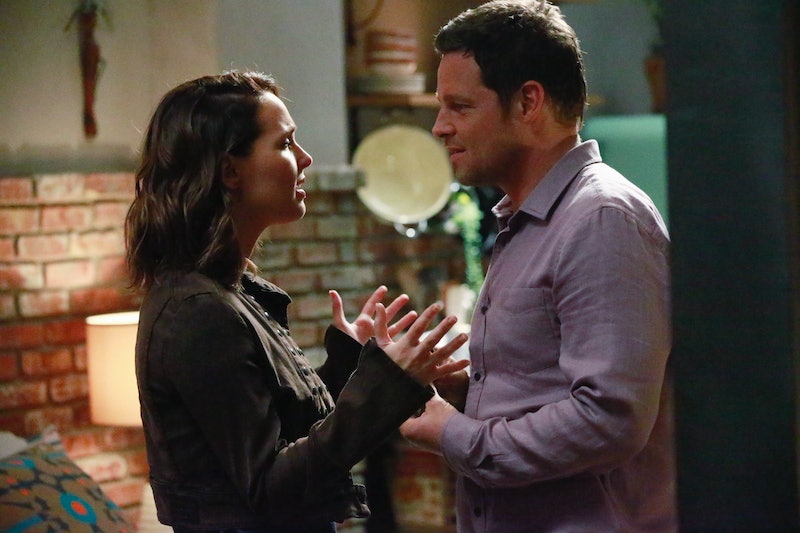 Considering there were no plane crashes or gun-wielding patients, the Season 12 finale of Grey’s Anatomy was actually very tame in comparison to other seasons. The biggest twist that happened came when Jo revealed she’s already married. It’s been so long, it’s not a surprise if you forgot that little nugget of information and how it’s going to play into the future of Alex and Jo’s relationship. I think it’s safe to say that her ex-husband will probably end up finding her and showing up expected. It wouldn’t be Grey’s Anatomy if he didn’t make an appearance.

So, what exactly happened between Alex and Jo last season? A lot of their drama stemmed from her insecurities with his relationship with Meredith. He proposed to her twice, and she didn’t give him an answer. In the second to last episode of the season, he demanded that she give him a yes or no and she turned him down saying she couldn't marry him. In the finale Jo got a little too drunk at the bar and revealed to DeLuca that she’s actually already married to a guy who abused her. She ran away, changed her name, and she can’t marry Alex because her husband will find her. Well that explained a lot. DeLuca got her home and tried to get her into bed, but Alex walked in and thought they were hooking up. Alex went into a rage and started punching DeLuca. Not exactly the type of thing you want to see when your first husband used to beat you.

However, in spite of all the drama, I think Jo and Alex will make it work for these reasons.

They’re The Best Couple On The Show

Let’s face it, the couples on this show have gone downhill since Burke left, McSteamy died, and Derek died. At this point, Jo and Alex are the only couple on the show you’re really, really rooting for. They are the only ones who actually have on-screen chemistry. Amelia and Owen? I don’t see that lasting at all.

In comparison to everyone else, Alex and Jo have always been able to talk about things like an adult. Do they have soap opera drama sometimes? Yes, but they’ve always managed to work things out in a mature way (Alex punching an intern notwithstanding).

They Come From Similar Backgrounds

They both came from broken households and had a rough upbringing. They help each other through things because they understand each other.

After what happened with Izzie, Alex deserves the best girl in the world. He deserves a win because Izzie was the freaking worst.

Come on, they’re so cute! Maggie and DeLuca, Meredith and Riggs, no one compares.

Alex Needs To Help Her With The Ex

When that inevitable day comes and Jo’s ex shows up at the hospital, he needs to be there for her and he will be.

In comparison to the rest of the couples, these two have the strongest chance of making it work, no matter what Season 13 throws at them.