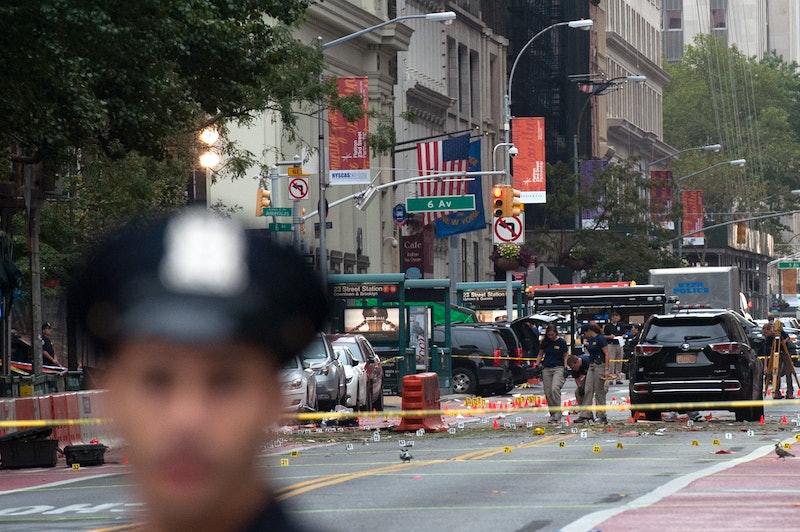 The FBI announced Monday morning that a 28-year-old Elizabeth, New Jersey, resident is wanted for questioning with regards to the bombings in New York City and New Jersey over the weekend. The suspect, Ahmad Khan Rahami, should be considered armed and dangerous, according to the wanted poster put out by the FBI. Cell phone alerts have also gone out across the area, and you're asked to call 911 if you see him. He's 5'6" tall and is thought to weigh about 200 pounds with brown hair and eyes.

NBC News reported that Rahami is the man seen on video in surveillance footage from the Chelsea bombing Saturday night, and ABC News is reporting that all the bombings are thought to be connected. What remains unknown is if the attacks are the work of one individual or a larger group. Some law enforcement officials told NBC that they are concerned these attacks are part of an active terror cell working in the two-state area.

Monday morning law enforcement raided Rahami's last known address in Elizabeth, but it remains unknown whether he still currently lives there. That New Jersey town is also the site of the latest bomb blast. Late Sunday night five explosive devices were found there by two homeless men searching through a trash can. When they saw pipes and wires, they reported it to the police. Just after midnight one of the devices exploded as an FBI bomb squad worked to defuse it. No one was hurt but the arm of the robot the team was using was blown off.

New York Mayor Bill De Blasio reiterated the FBI's call to keep an eye out for Rahami, while urging caution. "I want to be very clear that this individual could be armed and dangerous," he told The New York Times Monday morning. "Anyone seeing him should call 911 immediately." As for official details, those are still scarce. "In the coming hours we are going to be able to say a lot more about what happened here," De Blasio said on ABC's Good Morning America Monday.

The one detail that he did share was that "it is certainly leaning more in the direction that this was a specific act of terror." Just one day ago, de Blasio was quick to point out that wasn't necessarily the case. "To understand there were any specific motivations, political motivations, any connection to an organization — that's what we don't know," he told The New York Times on Sunday. New York Gov. Andrew Cuomo also changed his take the terror question. "I would not be surprised if we did have a foreign connection to the act," he told The Times Monday.

Rahami is an American citizen of Afghan descent, but what evidence law enforcement has about a terrorism connection — or terror cell — is unknown. Five others were stopped Sunday night crossing the Verrazano Bridge from Staten Island. They live in New Jersey and were believed to be heading to the airport. They are in custody but have not been charged with any crime.