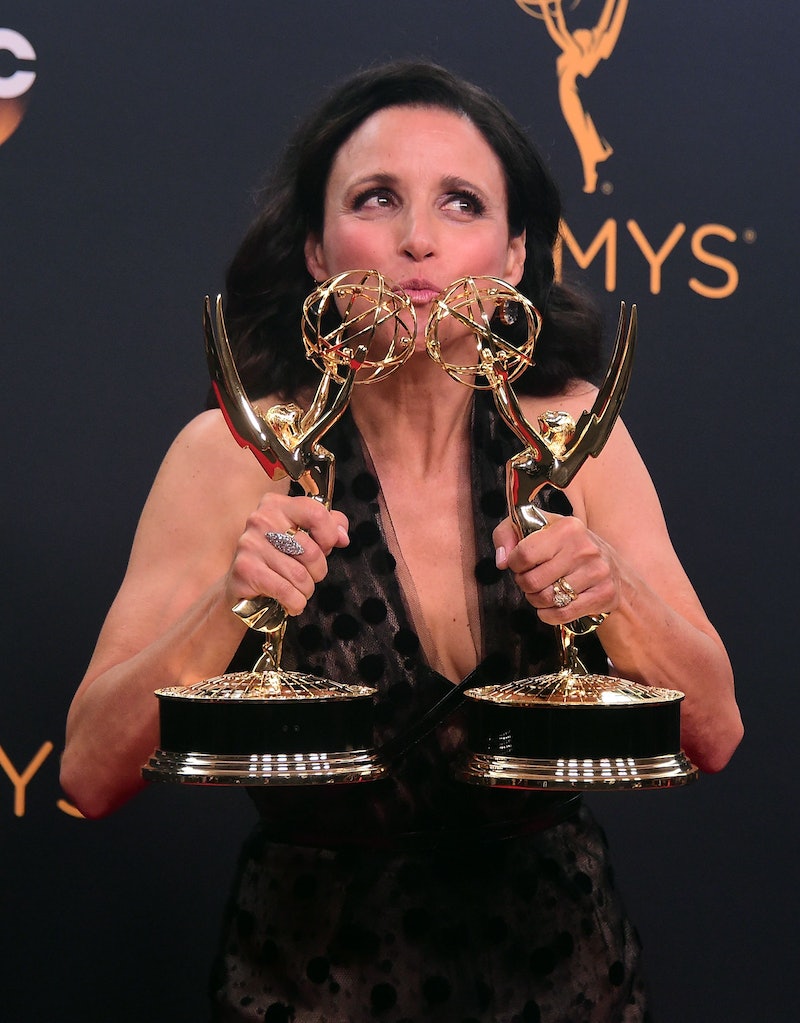 Instagram is basically the app embodiment of the expression, "Stars: They're just like us!" I mean, sure, celebs on the 'gram document things like going to fancy-pants award shows, where they spend the night glamorously traipsing on the red carpet, being awarded for their incredible talent, and rubbing elbows with Hollywood's elite — but they make it accessible. I mean, it's fun (and occasionally funny) to watch the Emmys on TV and all, but the real treat for pop culture aficionados is to see what happens during those moments that weren't captured on the small screen: A celeb accidentally photobombing another star, a ridiculous selfie of an actor getting ready, a hilariously-captioned shot of Leslie Jones, meeting, well, anybody (and everybody). Forget the actual award show itself: Everyone knows that the behind-the-scenes pics from the 2016 Emmys are really where it's at.

Truth be told, the majority of these BTS shots — like especially anything from Leslie Jones, Queen of Twitter — are actually better than the Emmy Award themselves. No shade, but sometimes it's just way more interesting (and way more hilarious) to see what celebs get up to when left to their own devices (and their own selfies).

Go behind-the-scenes of the 2016 Emmys below.

2. She Also Compared Herself To Nicodemus From The Secret Of NIMH

4. America Ferrera Had Her Priorities Straight

5. Kristen Bell's Makeup Artist May Have Had A Few Tricks Up Her Sleeve

6. Priyanka Chopra Knew How To Make A Glamorous Entrance

(The woman looks good for having spent the time making 7,000 peanut butter and jelly sandwiches.)

9. And Speaking Of PB&J, Heidi Klum

10. Sarah Paulson's Dress Turned Her Limo Into A Disco

11. While Her Girlfriend Holland Taylor Watched From The Other Coast

12. Patton Oswalt Got His Drank On

13. And Maisie Williams Got Her Green Eyeshadow On

15. And Queen Leslie Jones, Of Course, Killed It With Everyone

16. But Her Reaction Over Kate McKinnon's Win Deserves Its Own Spot

Until next year, Emmy Awards.

More like this
Julie Andrews Revealed A Surprising Behind-The-Scenes 'Bridgerton' Detail
By Grace Wehniainen
EJ Marcus Runs The Most Wholesome Corner Of TikTok
By Alexis Morillo
Will Beyoncé Be At The BET Awards To Perform “Break My Soul” Or Attend The Show?
By Jake Viswanath
Fans React To Kelly Holmes’ “Extraordinary” ITV Documentary
By Sam Ramsden
Get Even More From Bustle — Sign Up For The Newsletter