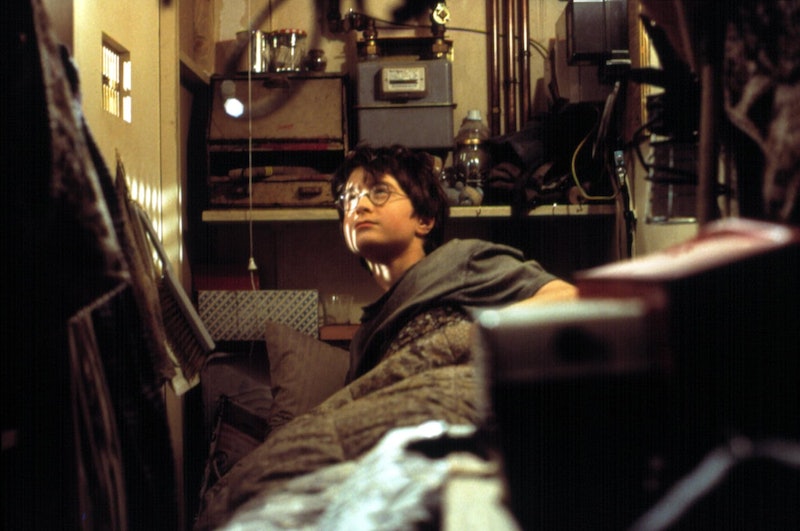 Tell your piggy banks to shake a leg, y'all, because you can buy 4 Privet Drive, Harry Potter's childhood home. The house, which was used for approximately two weeks in filming Harry Potter and the Sorceror's Stone, was the first depiction of 4 Privet Drive of Little Whinging, Surrey, where Mr. and Mrs. Dursley (who were proud to say that they were perfectly normal, thank you very much) raised Dudley and sort of occasionally checked to make sure Harry was breathing every now and then in his cupboard under the stairs.

The actual house is located in Martins Heron, Bracknell, Berkshire, which is approximately 25 miles west of London/Diagon Alley. The advertisement for the house weirdly says nothing about its magical origins, but hey! Three bedrooms! Just enough for some parents, their spoiled child, and their spoiled child's game room. Plus a nice, spacious backyard to force your orphaned nephew to prune weeds in the dead of summer. And really, at this price it's basically a bargain. You've got $619,425 lying around in your Gringott's vault, right? Oh, wait. I guess my grandfather didn't invent Sleakeazy's Hair Potion, so no, I don't. Ugh, my dumb, frizzy-haired Muggle genes have thwarted me again.

Incidentally, if you haven't robbed a bank lately, you could still afford to see Privet Drive back in the spring. The Warner Bros. Studio Tour in London offered a tour of a recreation of Privet Drive that was open from May 27 through June 6. So even if you can't afford to buy Privet Drive, maybe if we're lucky there will be another chance to see a version of it, should the exhibit open again.

In any case, if you start to see a bunch of owls popping up after the new buyers of the actual Privet Drive move in, you'll know what's what. And don't feel too bad for missing the opportunity. Save enough money and you can buy yourself a cozy place in Godric's Hollow, where the cool, hip young wizards and witches are living. Or just save that cash to buy yourself Harry Potter and the Cursed Child Tickets, because honestly, my kidney's been on the market in exchange for them for six months now and nobody's biting. Somebody wanna help a No-Maj out here?

More like this
16 Novels That Paint A Realistic Portrait Of Abortion
By K.W. Colyard
At 14, Jenny Han Wrote Rom-Coms About Her Friends & Fan Mail To Leo DiCaprio
By Alyssa Lapid
Lauren Rae Is Bringing Back The Sex And The City Vibes In Her New Memoir
By Shahed Ezaydi
The 'Hocus Pocus' Sequel Finally Has A Release Date & It Makes Total Sense
By Shannon Barbour and Radhika Menon
Get Even More From Bustle — Sign Up For The Newsletter