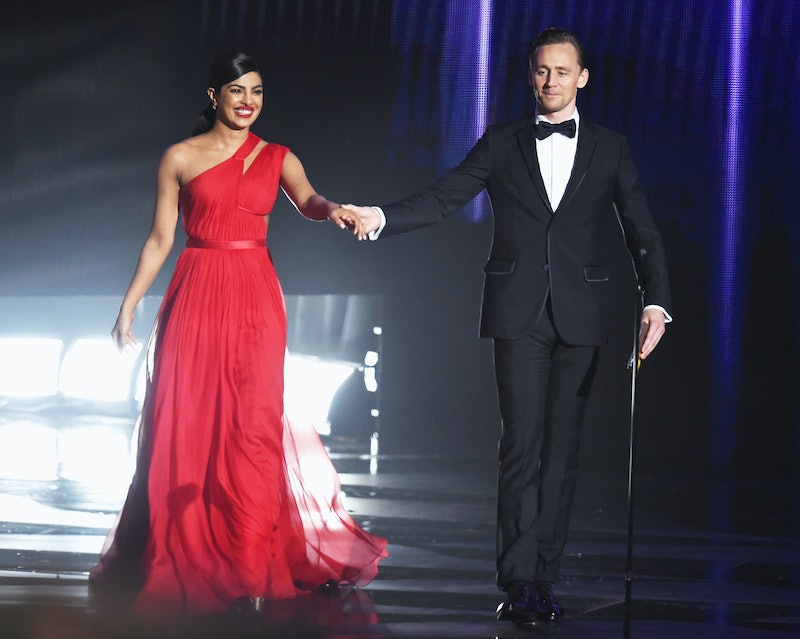 Awards shows are wonderful for acknowledging the incredible accomplishments of our favorite celebrities in their respective crafts, but the juicy gossip about which actor avoided who and which actors seemed to hook up at the afterparty is high on the list of concerns post-awards shows. When Tom Hiddleston twirled Priyanka Chopra onto the 2016 Emmys stage like a princess, collective mouths dropped at the glamour of the whole situation. But now, 'shippers have got even more to chew on: E! also reports that Chopra and Hiddleston flirted at an Emmys afterparty. So while they might not be dating (just yet), the rumor mill is happy to churn up this morsel.

And it's not like anyone can blame Hiddleston fans for thinking these two could work. While I watched Hiddleston and Chopra present an award together, I noticed their sly smiles and giggles towards each other on stage, and I have to say, my radar turned on. It looked like something was there, but regardless, it would seem that their attraction may have oozed into the Emmys after-parties, where eyewitnesses tell E! that the two were "openly flirting with each other" and another insider continues,

"Tom had his arm around her and held her close. Afterwards, Tom and Priyanka talked closely and were holding hands at one point for a few moments...Priyanka fixed Tom's bow-tie and then the two kissed on both cheeks."

The E! report also suggests that Hiddleston and Chopra may have exchanged phone numbers.

After that first sighting of them on the Emmys stage, social media was abuzz of their collective glamorousness and, now, with news of a possible flirtation, the couple 'shipping is in full force. Just think of the possible couple names: Chopraston? Tomyanka? Priyatom? OK, they don't exactly flow off the tongue, but this hasn't stopped fans from daydreaming about the possibilities:

And some fans already have their Emmys entrance as #goals, because, honestly, it was a pretty smooth move on Hiddleston's part:

At this same Emmys ceremony, Hiddleston confessed that he and Taylor Swift were still friends, and they surely both seem in prime condition to move on with their lives. Whether or not Hiddleston and Chopra are dating now or if they will be in the future, their palpable chemistry is already inspiring many fans and I hope they're having fun doing whatever they're doing, because, why not?