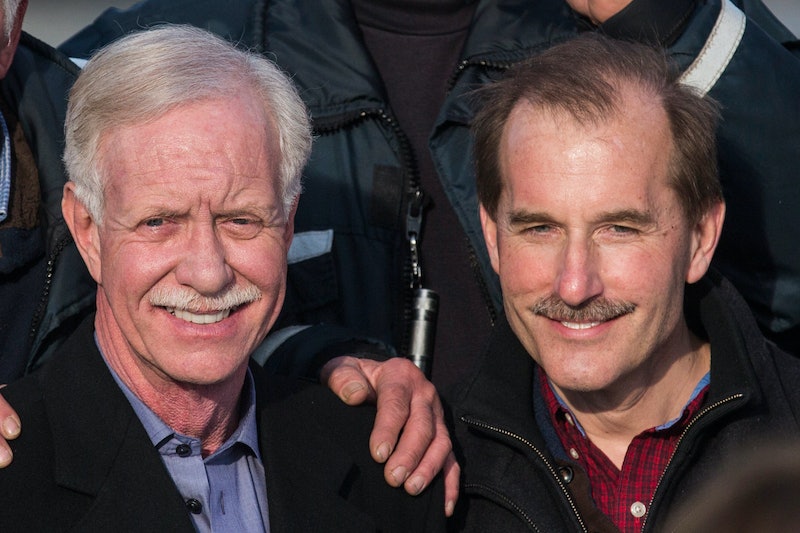 If life and the movies were fair, Tom Hanks's latest movie would be called Sully & Skiles, not just Sully, because Captain Chesley "Sully" Sullenberger didn't execute the safe water landing of US Airways Flight 1549 on the Hudson River all by himself. The pilot of the flight that became known as "The Miracle On The Hudson" was assisted by the rest of the crew, in the air and on the ground. His closest partner in enacting emergency maneuvers was his co-pilot, Jeff Skiles, played in the film by The Dark Knight actor Aaron Eckhart. Sullenberger has spoken out about being the subject of a big, Hollywood biopic, bhat does the real co-pilot Jeff Skiles think about Sully ?

Unlike Sullenberger, who has been retired from US Airways for years, Skiles went back to flying after a break. He's now employed by American Airlines. When Skiles is not piloting international flights, he makes appearances as a motivational speaker. Being a modern-day hero is very good for business, it turns out. Skiles is represented by the management company Leading Authorities, specializes in teaching businesses how to "handle crisis moments"; and can pull in up to $20,000 per speech. Like Sullenberger, Skiles also makes appearances at regular Flight 1549 survivor reunions.

According to his big screen alter ego, Skiles also participated in the development of this film. Eckhart told the blog Direct Conversations that he spoke with both Skiles and Sullenberger in preparation for his role. The actor and co-pilot even discussed the difference between the public's vaulting of Sullenberger into fame compared to Skiles. He said:

Jeff and I talked about this, and he said he realized that there has to be a face to the story — that the media is going to pick out a hero and Sully was that guy. Sully was the captain of the flight and Jeff came to terms with that and receded into the background. They were thrust into the spotlight so aggressively that one had to take that lead role. I don’t know what Jeff’s real feelings are about it, but he and Sully are still good friends today.

It seems that the media aftermath of that flight could have been divisive, but was nothing in comparison to what Skiles and Sullenberger actually weathered together in that cockpit. So though Sullenberger is certainly the lead character of this film, the co-pilot was in support enough to consult with Eckhart and other creatives on the film. He also attended the movie's world premiere with other members of the 1549 flight crew at Alice Tully Hall in New York City on Sept. 6.

Though Skiles has not made a public statement revealing his thoughts on the film, Eckhart told Entertainment Weekly that both Skiles and Sullenberger were primarily interested in the movie telling the truth. The actor said both pilots were "very concerned about their story" and "wanted to be represented in the proper light," something that the filmmakers "definitely tried to do." From his presence at the premiere, it's fair to assume that Skiles is pretty happy with the end result of Sully. But here's hoping that the "Miracle On The Hudson" co-pilot drops a review of his own sometime soon.

More like this
You’ll Be Able To Stream Bullet Train Before The Holidays
By Arya Roshanian and Radhika Menon
You Can Finally Stream 'Ticket To Paradise' At Home
By Chloe Foussianes
How To Stream 'She Said' In The UK
By Maxine Harrison
Yes, That's Lindsay Lohan's Sister Singing In The 'Falling For Christmas' Movie
By Radhika Menon
Get Even More From Bustle — Sign Up For The Newsletter