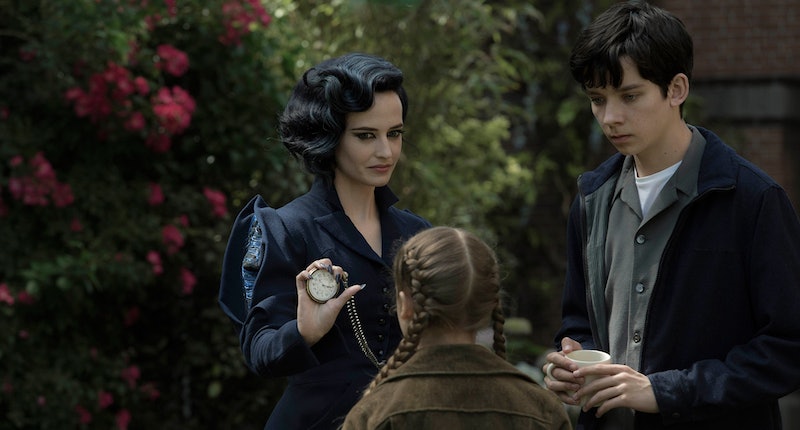 Many Hollywood directors can claim they have a unique style, but few can claim a style quite as unique as Tim Burton. The eccentric director known for his dark and beautiful filmmaking technique has helmed classics like Beetlejuice and Edward Scissorhands and created The Nightmare Before Christmas, and now he has a new movie coming out that's his most "Tim Burtonesque" in years. Miss Peregrine's Home for Peculiar Children has the fantastical look that Burton fans crave, but where did the movie come from? Is Miss Peregrine's Home for Peculiar Children based on a real place?

Unlike a number of works by Burton, the film is not based on his own original idea. Instead it comes from a book of the same name by author Ransom Riggs. The book tells the story of a Welsh orphanage run by, you guessed it, Miss Peregrine. But this is no ordinary orphanage, it houses "peculiars" — children who possess supernatural abilities. One child has an extra mouth on the back of her head that she uses to eat; another can control bees; while another has pyrokinetic abilities. Obviously, there aren't really people like this in the world, so there's no real home for them, but the idea for the story still came from the real world.

The inspiration for the book came from Riggs' collection of vintage photographs. The author has an interest in weird and mysterious pictures from yesteryear, and after first planning to put them together in a picture book, he eventually settled on weaving a narrative around them — the story that became Miss Peregrine's. Around four dozen vintages photos show up in the book, worked into the story, and they certainly are strange... and often disturbing.

One photo shows a clown face painted on the back of someone's shaved head; the crease of their neck functioning like a mouth (sound familiar?). Others feature crystal balls, mysterious shadow figures, and a boy's face superimposed on a dog's body. As far as where the photos came from originally, or what their reason is for existing, those questions remain unanswered. "Because the photos are anonymous, long divorced from whatever context might have explained them, I don’t know what’s up with them any more than my readers do," Riggs wrote in The Huffington Post in 2011. "All I know is that they creep me out. Each photo is an unsettling little mystery — and I like them that way."

There's no real Home for Peculiar Children like in Miss Peregrine, but its strange residents were definitely influenced by actual mysterious children of the past. Fans will never know what was going on in the photos that inspired the book, but with a little imagination, it's not too much of a stretch to believe they were all taken at a very special orphanage in Wales.