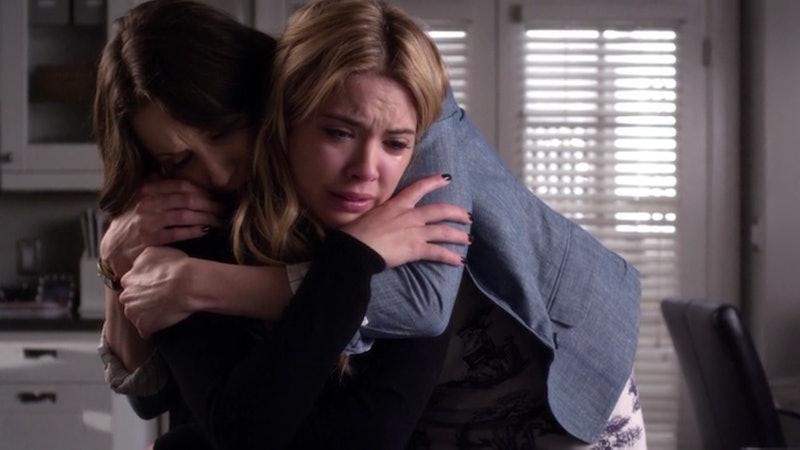 Pretty Little Liars has never been just one kind of show. The Freeform series may be filled with mind-bending mysteries, insane twists, and complicated villains, but despite the show's heightened premise, it's also full of very real moments. It's these human moments amongst the twist and turns that ground the show — after all, would we really care about A's identity if we didn't also care about the people that this stalker spent years torturing? Definitely not. The Liars may be badasses who have no problems throwing themselves into the fire if it means taking down A, but they also totally get what it's like to deal with the love of your life falling for someone else, or learning that the person they trusted most betrayed them. Pretty Little Liars is full of heartbreaking moments, and hopefully they're moments that can help you get through your own rough stuff.

Despite everything that these women have been through, the Liars are still human — which is why we want them to overcome all of their complicated, troubling circumstances. The battle against Uber A may not have been won just yet, but here are the 17 heartbreaking moments on PLL the Liars have gotten over:

Poor Emily. After someone ruins Alison's memorial and she is blamed for it, she tearfully confesses to her friends that she loved Alison as more than a friend.

Before Hanna and Caleb were officially "Haleb," Hanna learns that Caleb was helping Jenna getting intel on her — after they hooked up for the first time. Hanna sobbing alone in her room because of Caleb's betrayal will make you want to give her a huge hug.

Poor Hanna. After spending a season of "will-they-won't-they" with her Season 1 love Caleb, Caleb announces that he's going to California to reconnect with his estranged mom. Sadly, it was only one of many goodbyes between Haleb.

4. Emily Comes Out To Her Dad

Emily's dad Wayne (RIP!) is way more understanding and kind than her mom Pam is initially. Fortunately, they both come around, but watching how hard this moment is for Em is particularly heartbreaking.

5. Spencer Breaks Up With Toby Because Of A

Poor Spencer — in order to protect Toby, she had to break his heart.

Emily's girlfriend Maya had been MIA for weeks, so discovering that she had been killed just moments after returning to Rosewood was so tragic.

7. When Spencer Finds Out Toby Is A

Spencer learns that Toby has been working with the A team on the very same night she planned a major anniversary dinner. Spencer plays it cool in this scene, so the real person it's heartbreaking for is the audience.

8. When Spencer Begs Toby To Tell Her The Truth

Spencer's refusal to believe that Toby has really gone over to the dark side leads to her sobbing at his front door.

Aria gives Lauren Conrad a run for her money when it comes to the one-eye cry.

Paige's hatred of Alison eventually overcame her love of Emily, and though the moment was an angry one, it definitely made you feel for a couple who had one very big fundamental difference between them.

11. Aria Learns Ezra Was Writing A Book About Her

Ezra may not have been lying about his feelings for Aria, but he was certainly lying about a lot of stuff. Aria having that confrontation with Ezra is all of us finding out someone we trusted betrayed us.

Sure, Caleb comes back to Rosewood after his spinoff series is cancelled, but it's not like we actually knew that was going to happen.

13. Alison Reveals That Her Mother Buried Her Alive

Alison always seemed like an infallible character on the series, so watching her sob because her mother had chosen to protect her attacker over her was heartbreaking.

There's a real chance that Charlotte is lying about a lot of her backstory (especially now that we know about the existence of Mary Drake) but her past experience in Radley, and with her uncaring father, seems all too real. Hearing how Charlotte was wrongly thrown in Radley because of her gender identity was devastating, even if, ultimately, she was the villain of the story.

After the time jump, we learn that Spencer and Toby have broken up. We only find out later that part of the reason they chose to split up is because they had a pregnancy scare while in college, which made them realize that they wanted very different things. Watching their relationship disintegrate onscreen was both uncomfortable viewing and very, very sad.

16. Hanna Tells Caleb The Truth About Their Breakup

Hanna was so close to not letting Caleb go to Europe without her. Had she come back to the apartment just a few minutes earlier, so much after the show's time jump would be different.

After a very hectic night (Spencer and Hanna just buried a body!) Caleb comes to the door to beg for a second chance with Spencer, never realizing that Hanna is also behind the door. Caleb is crying, Spencer is crying, Hanna is crying — literally no one is OK in this scene.

18. Aria Finds Out Nicole Is Alive

Aria gave Ezra the plane tickets to go find out the truth about Nicole. Unfortunately, the truth wasn't what Aria was expecting — Nicole was found alive, which meant that Aria's engagement to Ezra was very much up in the air. As wonderful as it is that Nicole was found alive, Aria's heartbreak over watching her true love embrace his other true love was hard to watch.

These moments were devastating, but as with any PLL heartbreak, the Liars always know how to get through it.

More like this
These 2 Tragic ‘Stranger Things’ Finale Moments Were Improvised By The Actors
By Grace Wehniainen
Did *That* Character Really Die In The 'Stranger Things' Season 4 Finale?
By Grace Wehniainen
'The Summer I Turned Pretty' Using “Cruel Summer” Has Twitter Begging Taylor Swift To Release A Music Video
By Radhika Menon
'The Summer I Turned Pretty' Book Ending Is An Emotional Rollercoaster
By K.W. Colyard
Get Even More From Bustle — Sign Up For The Newsletter