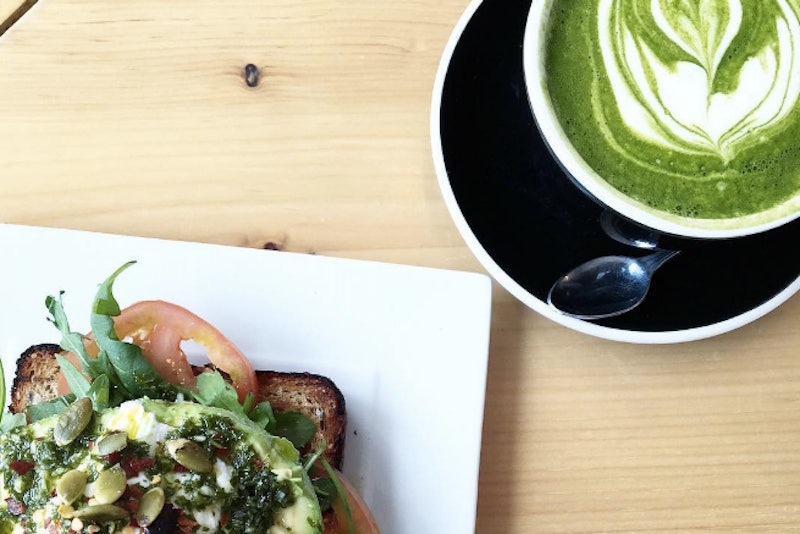 Even though I've heard all about the health benefits of matcha, I've yet to get on this green tea train. I know people who swear by it, saying it's so healthy and it's better than coffee. But I've yet to convert from my classic Americanos and boring ol' cups of Joe.

I think, however, that I may finally be swayed. After hearing benefit after benefit, matcha sounds like it should be my new go-to drink. It seems to rival the most antioxidant-rich, health-inducing foods, and I could definitely use more of that in my life.

To find out more, I spoke with Jessica Lloyd and David Mandelbaum, co-founders of PANATEA's matcha, who are obviously all about it. "Matcha is the ultimate superfood ... In only a few sips, you consume the full health benefits of the entire [green tea] leaf — not just what’s left over from steeping tea."

This makes sense, since green tea is widely known for its healthy properties. Getting more of that should be even better — as long as you snag yourself a good batch. "The color of good quality matcha is vibrant green, and the taste is full-bodied, rich, earthy and smooth... almost creamy," say Lloyd and Mandelbaum. To drink it, have it as a traditional shot (like an espresso), or toss the powder in a latte, smoothie, or even a baked treat, they tell me. Read on for all the reasons why we should all consider giving it a try.

1. It's Healthier Than Coffee

If you're totally addicted to coffee (and worry about how much you drink), then consider giving matcha a try. "Most people become acquainted with matcha as a healthier coffee alternative, as it provides sustained and focused energy for about four to six hours," say Lloyd and Mandelbaum. "You get the healthy benefits of green tea, without having to consume lattes all day long. Win win?

2. It Works Better Than Coffee

While I love coffee and need it just as much as the next gal, I kind of hate how jittery it makes me feel. So, personally, I'm happy to hear that matcha doesn't do that. "Unlike coffee ... matcha provides a sense of calm alertness, so you feel the energy without any jitter, crash, or negative side effects," say Lloyd and Mandelbaum. For that reason alone, it may be worth switching my addictions.

3. It Just May Fix Your Insides

OK, so maybe matcha isn't a cure-all. But it sure does have a lot of healthy antioxidants, which are pretty darn good for your bod. "As the body’s cleanup crew, antioxidants provide protection from harmful free radicals, which are the molecules responsible for aging, tissue damage, and even some inflammatory diseases," note Lloyd and Mandelbaum. Totally worth the sip.

4. It May Slow Cancer Cell Growth

Apart from reducing the risk of tissue damage, those same antioxidants go one step further. Research has proven that a polyphenol in matcha called EGCG has been shown to slow or halt the growth of cancer cells, according to Cynthia Sass, MPH, RD, on News.Health.com. Now, this doesn't mean it cures the disease. But it is a healthy benefit to keep in mind.

Many a colorful, nutritious food can improve your heart health, and that includes the green goodness that is matcha. "A 2011 study in the American Journal of Clinical Nutrition showed that the catechins in green tea had a significant effect on lowering LDL cholesterol," said Katie, a healthy cookbook author, on her blog WellnessMama.com. "A 2013 Cochrane review also showed that regular green tea consumption was associated with lower blood pressure and a decreased risk of stroke."

6. It Can Help You De-Stress

Here's good news for all us stressed out folk: Matcha contains a natural substance called l-theanine, which induces relaxation without drowsiness, according to Sass. It has also been shown to reduce cortisol, the well-known stress hormone.

7. It Makes A Lovely Face Mask

Lloyd and Mandelbaum point to Dr. Stacy Chimento, who says, "“The high concentration of antioxidants and the healing properties and immunity boost obtained from matcha green tea powder makes it a great and effective ingredient for use in skin products.” Go ahead and smear some on your mug.

8. It Boosts The Immune System

Those healthy antioxidants also play a role in keeping the immune system functioning. And a healthy immune system is better at handling infections from bacteria, parasites, and viruses, according to health writer Derek Bryan on Livestrong.com. So drink up.

9. It Combines Well With Meditation

Matcha may contain some stress-reducing nutrients, but the act of sipping it can be just as relaxing. "I believe that if preparing and sipping matcha becomes a way for you to slow down, and be in the moment, its benefits will extend far beyond the antioxidants it provides, because meditation, in any form, has a myriad of rewards," Sass said. Amen to that.

10. It Can Boost Your Brain

Sadly, matcha will not magically make you smarter. But researchers have found a connection between drinking green tea and improved performance on working memory tasks, according to Dr. Joseph Mercola on the health site Mercola.com. "The increased activity [in the brain] was correlated with improved performance on working memory tasks, and the researchers believe the results suggest green tea may be useful for treating cognitive impairments, including dementia," he said. Pretty cool, right?

11. It May Help You See Through Walls

Or, maybe just see a bit better. "Catechins in green tea could help protect you against glaucoma and other eye diseases, as research found that the compounds travel from your digestive system into the tissues of your eyes," Dr. Mercola said. "During the study, the catechins found in green tea were absorbed into various parts of the eyes anywhere from 30 minutes to 12 hours after rats were given tea."

As more research is done on the benefits of green tea, there's no harm in adding more matcha to your life. At the very least, it'll wake you up — all while being quite delicious.

More like this
11 Neck Exercises That'll Help Relieve Tension
By Carolyn Steber
How To Make The TikTok-Viral Loaded Baked Potato Dip
By Emma Garza
This TikTok Hard Seltzer Hack Involves A Milk Frother
By Alexis Morillo
On TikTok, Orange Wine Is The Varietal Of The Summer
By Madeleine Aggeler
Get Even More From Bustle — Sign Up For The Newsletter