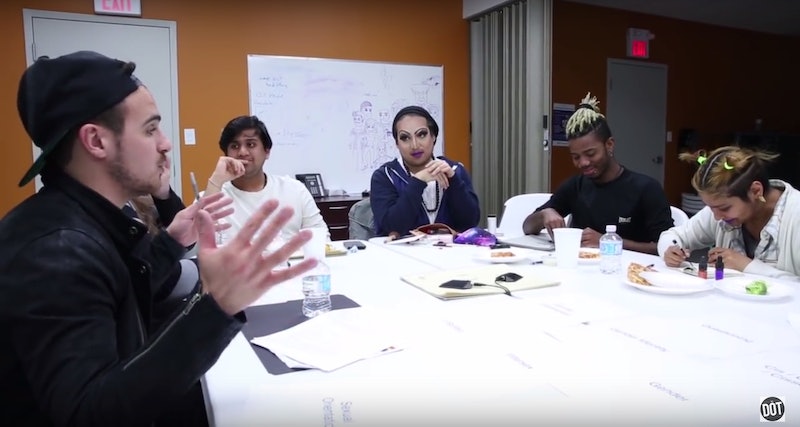 Too often, our society treats gender as a binary, fixed, natural phenomenon — but gender isn't a binary, and the participants of The Dot TV's "Degrassi Connects The Dots On: Gender Identity" video can teach us a lot about what many of us get wrong about it. Recently shared by Everyday Feminism, the video features people with LGBTTIQQ2SA identities — that's "Lesbian, Gay, Bisexual, Transsexual, Transgender, Intersex, Queer, Questioning, 2-Spirited and Allies" — talking about the biggest problems with how we as a society think about gender. In doing so, they highlight and debunk a number of myths surrounding gender and gender identity, firmly cementing the video as something which we'd do well to consider required viewing.

In the video, which is an episode of the web series "Degrassi: Connecting the Dots," Degrassi's Adamo Ruggiero interviews students from the REX Pride center in Toronto about their gender identities. While individually, they go by a wide array of pronouns, Ruggiero addresses the group as genderqueer, which the video defines as "a term used by some people to defy gender restrictions and/or deconstruct gender norms."

Many straight and/or cisgender people want to be allies to members of the LGBTTIQQ2SA community, but may not know exactly how to go about doing it. This video could be incredibly helpful in providing a starting place; as they say, knowledge is power, and "Degrassi Connects The Dots On: Gender Identity" is full of knowledge. Indeed, as some of the people in the video remark, even those who want to support genderqueer people often operate with a few major misunderstandings.

Check out some of the biggest ones "Degrassi Connects The Dots On: Gender Identity" highlights below, and watch the full here:

Myth #1: A Specific Gender Identity Resonates With Everyone

Even when we accept that not everyone is cisgender, we often assume people must have some gender identity. But the concept of gender in and of itself doesn't necessarily resonate with everyone. "The term 'gender' wasn't made for me. That's made for everyone else to understand," explains Franny, who goes by both "he/him" and "she/her" pronouns. "All these terms are not for me. They're for everyone else to get comfortable with me." While people may choose to identify with certain pronouns or gender identities because they're the best options within the system currently in place, that doesn't mean everyone help create, or even consented to, this system.

Myth #2: Your Look Has To "Match" Your Gender Identity

Sharna, who goes by they/them, used to always wear pants because they were told, "You're a girl because you don't present masculine." But now, they realize that the same way you don't have to wear dresses to be a woman or wear pants to be a man, you don't have to wear either to be genderqueer. "There's a lot of people who are like, 'You can't be gender non-conforming or 'You can't be non-binary' because you look like a girl," they say. "What does 'look like a girl' even mean?" Jeff, who goes by he/him/his, also calls out the notion that "if you're non-conforming, you have to show it on the outside" and "it can't be an internal thing."

Myth #3: Gender Is The Same In Every Culture

Tress, who goes by he/him and they/them, discusses how he's dealt with different standards of masculinity within the black community than people in other cultures might face. "There's a strict definition for what masculinity is when you look at the context of blackness," he explains. "If there was a line, that would be like a brick wall." In other cultures, gender may be less rigid. For example, some Native American cultures acknowledge two-spirited people. The differences between gender in different cultures demonstrates that gender is a social construct — so, of course, different societies construct it differently.

Myth #4: Gender Will Always Be The Same Throughout Time

"Gender is a very complicated. It's a whole book," Tress explains. Sharna agrees: "We're all constantly learning about stuff," they say. "These things constantly change." Because, again, gender is a social construct and not a natural phenomenon, it's different during different times in history as well as in different cultures. Many of the gender-related terms we now have didn't exist 10 years ago, and there will probably be new ones in another 10 years.

Myth #5: You Can't Change Your Mind About Your Gender Identity

"There's this sort of policing attitude toward gender identity and sexuality," explains Sharna. "If you don't get it right the first time, people scare you away from ever trying again." In reality, if you change your mind about your gender identity or are even gender-fluid and identify differently from moment to moment, that doesn't make you a fraud. Their advice to people who know genderqueer people? "When someone is trying things out, just be there for them," they say. "It's OK to present yourself in different ways until you feel something that really works for you."