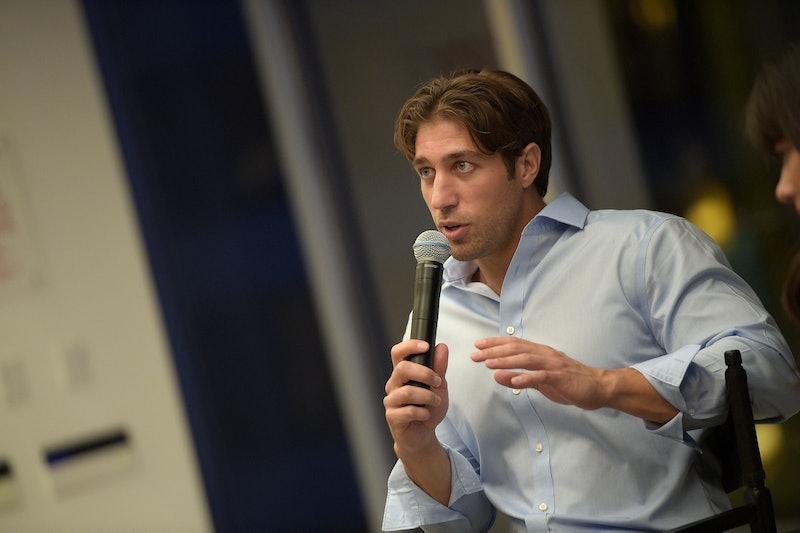 After investigating three cases over several episodes, Season 1 of Unlocking the Truth ends on Wednesday, Oct. 5. It was clear that hosts Ryan Ferguson and Eva Nagao poured their soul into this project, methodically looking through files, evidence, and tracking down witnesses to see if their subjects' claims of innocence had merit. Their passion for their work radiated off the screen, and, as hard as it must have been, is it possible they'd want to do an Unlocking the Truth Season 2? Bustle reached out to MTV for comment on furthering the series and has not yet received a response. Until a potential next season airs, though, it is possible for regular people to help those that may be wrongfully convicted. In an interview with Bustle before the season premiere, Ferguson and Nagao laid out just how everyday citizens can do their part.

And, there's likely going to be quite a lot of downtime for fans to help out in. If there were to be a second season of the show, it likely wouldn't premiere for a long time. All that research Ferguson and Nagao did took time, so the turnaround couldn't be immediate. If they did return, there's also the question of whether they'd explore new cases or stay with any updates on the three they pursued this season. As it stands now, Byron Case, Kalvin Michael Smith, and Michael Politte's convictions have not been overturned and the men remain in jail. Whether those men are innocent as they claim or not, there's no denying that there are sometimes people in jail for crimes they didn't commit, and they do need our help.

No one knows better than Ferguson what a wrongful imprisonment feels like. According to ABC News, he was incarcerated for almost 10 years for a murder he didn't commit before finally being exonerated in 2013. In the years since his release, he's dedicated his time to making sure other people don't suffer his fate, be that via system reform or freeing those who may currently be sitting in jail for crimes they didn't commit. For her part, Nagao is also very familiar with wrongful conviction cases. She's the managing director of the Exoneration Project, which runs out of the University of Chicago Law School and helps represent those who may be wrongfully convicted. Safe to say, the hosts know what to do to help out, and they want everyone to join in.

Nagao's biggest advice to those who want to put an end to wrongful convictions is really just to be aware that they happen — after all, you can't fix a problem you don't know is there. "Realizing that these issues exist, talking about them in your communities, and just not taking the police for their word, not taking the judicial system as it is, is hugely important," Nagao says. "So, even if you can play that small part, which is to be an unbiased juror or just a community citizen who is active and not just calling the police on every young person you see, or everything that happens — to really think about how corrupted this system is and taking that into account when you imagine public safety, when you imagine how you interact with the law."

Ferguson agrees, and adds that it's important to be diligent in your research before forming a conclusion about a person. "We can aways spend more time researching a case or a person before we react and respond," he says. "A lot of people will make a comment, and it’s from a place of not knowing all the facts. That’s very hurtful. It can cause a person to go to prison for life for something they had nothing to do with, just because you don’t like the way they look or you heard one [thing]." He continues, "Really look into these cases, really take the time if you’re going to talk about them ... if we’re just uneducated and screaming back and forth, it’s not going to get us anywhere. So what we do is just continue to spread awareness and we can all do that. We all have a voice."

Ferguson and Nagao aren't the only members of Unlocking the Truth who hoped it would inspire others to take action. Adam Kassen, one of the series' executive producers, tells Bustle, "You don’t have to look very far, wherever you are in this country, to see that there might be an injustice not so far from you." He has some ideas about how to change that. "There needs to be accountability with prosecutors and police officers," Kassen says. "The vast majority do a great job [but they] need to be held to a higher accountability standard for what they do."

That's where you come in. "The hope is the more people who talk about this, the deeper and larger the conversation gets and the more pressure it puts on these people that they’re being watched and they have to pay attention," Kassen says. "It’s good for everybody."

So, even if there isn't another season of Unlocking the Truth, you can help Nagao and Ferguson in their continued efforts by paying attention, doing your research before making assumptions about a crime, and speaking up as jurors and voters if you see something you think is wrong. It's really hard to get an innocent person out of jail, as Ferguson knows from his 10-year prison stint, so the best way to help with wrongful convictions is to make sure they don't happen in the first place.