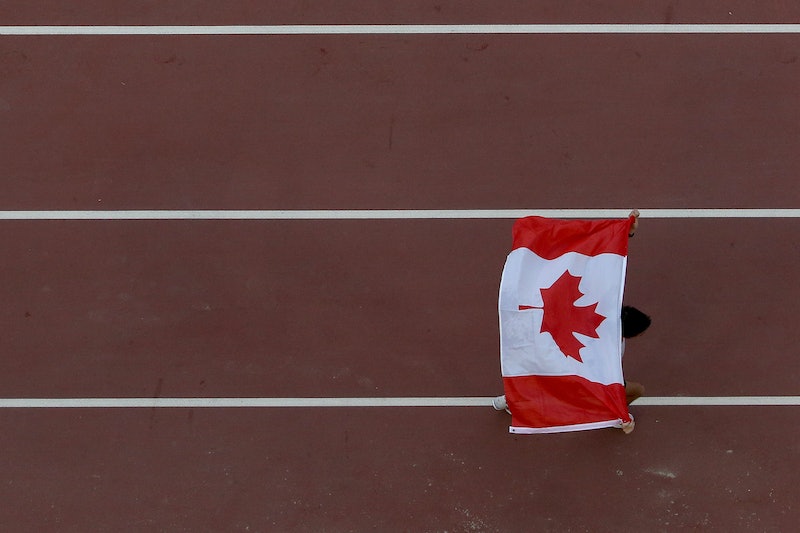 Canada can't be that different from America, right? That was my assumption when I moved from Boston to Ottawa, Ontario almost two years ago. And as similar as everyday life in Canada and the United States is, sometimes you get a reminder that you're in a completely different country. I've found there are seven things that consistently make me realize I'm not in Kansas anymore. (And no, one of them isn't that Canadians are much more polite.)

I was just trying to get some background noise while I was unpacking in my new country when I got this polite notice:

"We are deeply, deeply sorry to say that due to licensing constraints, we can no longer allow access to Pandora for listeners located outside of the U.S., Australia and New Zealand."

Netflix is also different, and I can't watch any clips from Hulu that are embedded in websites. I long for the days of getting whatever I want out of the Internet. When I go back to Boston, I just turn everything on at once and go to town alone. (Like an American does.)

In America, when the bill comes along and no one has cash, everyone starts counting off the things they ordered ("Well I only got a salad," or "I only had water, no beers") and suddenly, your friends all look like cheap bastards.

But oh, how I love you, Canada. You have abated all of my group dinner anxieties by standardizing personal bills. When the waitress comes by with the check, she carries along a debit/credit machine and has already separated bills by couple, groups, or individually.That way, one swipe, and you're done. There's no overstating how amazing this is in practice. People coming late or leaving early? No problem. Someone just doing cocktails? Hey, sure! We need to bring this practice to America, stat.

Let's just go ahead and say that the first time you walk out of a doctor's office without paying for all sorts of blood draws and tests, it feels pretty epic.

Not to mention, not hearing a woman's right to choose debated every day is a breath of fresh air. And don't even get me started on maternity (and even paternity) leave. According to a 2012 study by McGill University:

"[In Canada], depending on the length of employment history and the hours worked, new mothers can take between 17 and 52 weeks of leave from their jobs. Their employers are required to accept the employees back into their jobs, or the equivalent, at the end of the mandated leave at the same rate of pay with the same employment benefits,"

This isn't even counting the country's extensive paternity leave. On the flip side, it's extremely difficult to find a primary care provider in Ontario, with many people on waiting lists for months to find someone open to new patients.

Yelp is Not a Thing

I'm the kind of person that can't get a haircut without checking online reviews. Ottawa recently got Yelp, but it's still in its infancy and doesn't have many posts yet. Often, there are none at all. It's like I have to use my own judgement.

Winter is Kind of Fun

This winter, my social networks were absolutely dominated by American friends complaining about snow, temperatures, shoveling, driving, winter, and anything they could possibly complain about. In Ottawa, where the weather was the same or worse, we were all like:

Instead of complaining or just hibernating for several months, many places in Canada actually celebrate winter. In Ottawa, when the city's canal freezes over, they throw some food stands on it, play some jolly tunes, and people skate to work.

Basically, if you have to suffer through winter (and Canada does) you should probably stop complaining and have a little fun with it.

You have to give it to cities like Boston, New York, and Chicago for having pedestrian etiquette more or less on lockdown: Stay to the right when you're walking down stairs. Move to the left to pass someone. Stand to the right of an escalator so people in a hurry can pass. Don't take up the whole sidewalk.

In my experience, major Canadian cities didn't seem to get the memo on these rules. It's chaos trying to cross streets or walk in a mall, with people coming at you from all angles. Dog leashes and tiny children are constant obstacles. There's no regard whatsoever for people in a rush. It would never fly in New York.

Yeah. Well, I'll tell you that Canadians definitely know all about Obama, John Kerry, and even the electoral college — and are primed and ready to debate current events in the States. But most Americans that I've encountered have very little to no understanding of our neighbors up North. (By the way, the answers are Stephen Harper and John Baird.)

Still, sometimes it's strange to remember that Canada was on the British side during the American Revolution and the War of 1812. The first year I moved to Canada was the anniversary of the War of 1812, and the TV was chock full of commercials touting how amazing it was when they burned down the White House. Talk about feeling out of place.