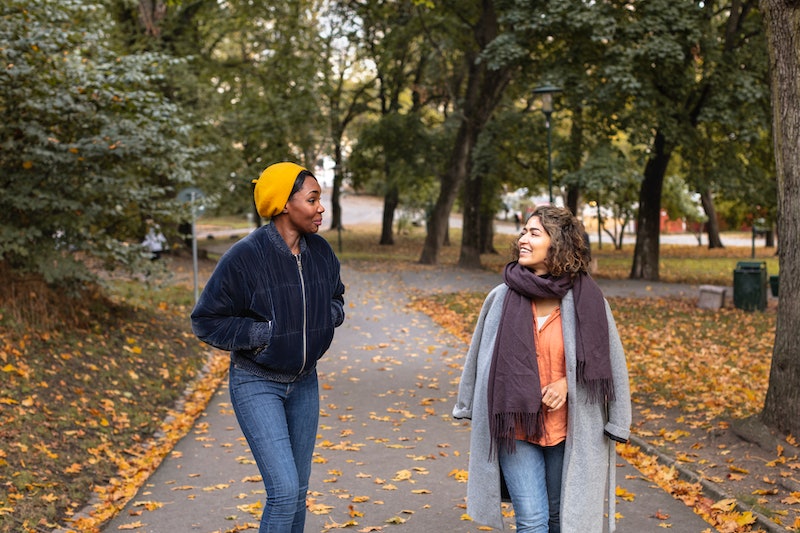 The astronomical first day of fall, also known as the Autumnal Equinox, is this Thursday, September 22. Common knowledge and a rudimentary understanding of Latin dictate that, functionally speaking, day and night are about the same length and the days will get progressively shorter until the longest night of the year on the Winter Solstice in December. But there are a whole lot more Fall Equinox facts where those came from.

Until sometime around the 16th century, when the words fall and autumn were both introduced into the lexicon of the English language, the season between summer and winter was widely referred to as harvest. Harvest time was, just like it sounds, the time when farmers would reap the bounty of the long summer growing season, and many cultures have feasts and festivals built into the harvest season. The September full moon is known as the Harvest Moon in honor of the extra long hours farmers would work collecting crops like corn, turnips, carrots, and hardy greens. You'll recognize these veggies as common elements in Thanksgiving recipes.

But back to the Equinox itself — as you probably know, the September Equinox is only the Fall Equinox in the Northern Hemisphere, while the Southern Hemisphere is gearing up for spring. At 10:21 a.m. Eastern Daylight Saving Time, the sun will cross the celestial equator headed south, where it will remain until our Spring Equinox in March of next year. Here are some more super interesting facts about the first day of fall.

1. The Northern and Southern Hemispheres are equally illuminated.

Because of the way Earth's axis tilts, the only point at which the sun's rays are exactly perpendicular to the equator is during the equinoxes. That means that each latitude above and below the equator is receiving the same amount of sunlight as its counterpart on the other side of the globe.

Day and night are equal-ish in length, but most places on Earth get more than 12 hours of daylight on the equinoxes because of the scientific definition of sunset. Technically speaking, sunset occurs when the center of the sun crosses the horizon rather than the whole sun. Refraction of sunlight in the atmosphere lighting the sky after the sun has dipped below the horizon also lends to the appearance of daylight while it's actually, scientifically speaking, nighttime.

3. Daytime beats out night by a few minutes.

In terms of sunlight versus darkness, the Equinox sees between eight and 14 more minutes of sunlight. Day and night will actually be the same length around the 26th of this month.

4. The sun rises and sets from the same direction almost everywhere.

Every single place on Earth (except for the poles) sees the sun rise from due east and set exactly due west.

5. The September Equinox happens at the same time globally.

It's not like New Year's Eve which occurs at midnight in each respective time zone. The Fall Equinox will occur at 10:21 a.m. Eastern Daylight Saving Time (that's 7:21 a.m. Pacific) this year.

6. Now would be a good time to look up at the Northern Lights.

People at high latitudes are more likely to see the aurora borealis around the equinoxes. That's because, like in the spring, geomagnetic activities are twice as likely to take place in the weeks following the Fall Equinox.

7. Stonehenge has a large celebration.

Druids, Wiccans, Neo-Pagans and tourists alike will gather at Stonehenge, which, besides being a feat of ancient engineering, is a solar aligned archaeoastronomy site — meaning it was built partly as a sort of solar calendar to gauge the movements of the seasons. While it's well-known for being the site of summer solstice celebrations, visitors also flock to the site to mark the Fall Equinox as well.

Yep, that means humans too! Just like other animals, humans experience an uptick in testosterone levels during autumn, which means increased libido. How fortunate that this hormonal fluctuation coincides with the newly chilly evenings.

9. The North Pole gets one long sunset.

The North Pole experiences one epic sunset at the moment of the Autumnal Equinox and remains in twilight until early October, after which it is dark all 24 hours of the day until the sun rises again on the Spring Equinox.

10. The astrological symbol of the Libra represents the Fall Equinox.

The balanced scales symbolizing the astrological sign Libra are meant to represent the equal length of day and night. The sun enters Libra at the moment of the Fall Equinox. It all makes sense now.

Editor's note: This piece has been updated from its original version.

More like this
The 15 Best Dresses For Hot Weather
By Andrea Gale Boerem
Your Guide To July’s Full Buck Moon
By Brittany Beringer
Here's Your Daily Horoscope For July 6, 2022
By Mecca Woods
5 Differences Between YouTube Shorts & TikTok
By Emma Carey
Get Even More From Bustle — Sign Up For The Newsletter