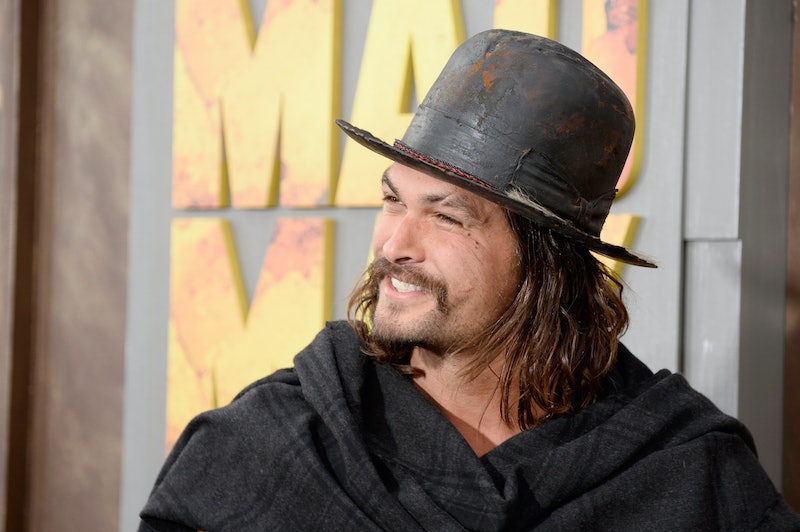 First, let's start with the Momoa's handle, @prideofgypsies. I don't know about you, but that already peaks my interest ;it's such an intriguing title. Then, we've got the images the actor shares. He peppers his Instagram with GoT-love, breathtaking family photos in super-crazy-fabulous locations, and glimpses into his other acting roles. It's not quite the same as getting lost in a new season of Game of Thrones, but it's certainly not an unpleasant experience. A deep dive into Momoa's Instagram is a treat almost as enjoyable as the catharsis one gets from GoT.

The following are some of the best photos from Jason Momoa's Instagram to keep you going until Season 7 finally premieres next summer.

1. The Selfie With A Bespectacled Kit Harrington

Dang, Jason Momoa is a giant. How does one get so tall?

2. The Political Activist One

Like Khal Drogo, Momoa cares a lot about what's going on in his world. I'm not entirely sure why this star chose not to wear a shirt, but I'm not complaining.

3. When Jason Momoa Was A Bit Of A Fanboy

I may or may not have wiped a tear from my eye at the line "Love u dan and david and all that made it possible for me to be here with my babies." First, it's cool that Momoa and fam get to chill at a Red Hot Chili Peppers. Second, it's cool that he brought his family to educate the young minds on good music.

Nobody wants to tangle with an Aquaman/White Walker hybrid.

5. One Of The 'Grams Heard 'Round The World

When Momoa started writing "Aloha Drogo," fans were certain this meant Drogo was going to be resurrected Jon Snow-style. Its certainly a fun theory to think about. This picture with the Game of Thrones showrunners stoked the fires even more. But even if it doesn't mean anything magical, it was definitely a sweet reunion.

6. When He Showed Off His Strength

Who do you think would be better at scaling a climbing wall — Jason Momoa or Khal Drogo? Or is the answer that they would climb equally well since they are the same person? The answer is truly unclear.

7. When He Reminded Us That He Is A True Artist

Oh, to be able to look at one of the photos he has taken. This guy isn't just Khal Drogo, he's got so much more going for him.

8. When He Gave Us A Glimpse Of Those Muscles We've Been Missing

Pretty sure no other character on GoT has back muscles that ripple so perfectly.

9. This Reminder That We'll See More Of Momoa Soon

Hey, maybe Drogo is dead, but we still get to see the actor getting his hero on with a new "ohana."

10. When He Supported His TV Wife

He's so proud. It almost distracts me from the fact Khal Drogo was not actually the ideal life partner.

And we were all momentarily distracted from our Game of Thrones thoughts because it looks so good.

What a proud father. Momoa's such a cool Dad! If only we could have seen him be a daddy on Game of Thrones (besides in weird visions).

13. When He Crossed The Narrow Sea

If he can do it, surely so can the rest of the Dothraki in Season 7.

14. When He Was Scared By The White Walkers Too

I totally get what your saying, Bud.

15. When He Swooned Over His Lady

I 'ship the Momoa-Kravitz duo so hard.

17. When He Fought For His Heritage

Momoa and his entire family were a big part of a viral moment trying to protect a dormant volcano on the Big Island of Hawaii called Mauna Kea from the addtition of The Thirty Meter Telescope. According to Huffington Post, Mauna Kea has always been seen as a holy place in Hawaiian culture, and Momoa was against the damage construction might cause to the sacred lands.

Nothing like a good throwback photo to make you forget that Cersei holds the Iron Throne and Sansa Stark still has a relationship with Petyr Baelish.

19. A Healthy Supply Of Fan Art

Fan art is always a great medicine for the television show-obsessed. It helps alleviate the pain for just a section.

I'm not going to lie to you and say that looking at Jason Momoa's Instagram will completely alleviate the pain of your wait 'til Season 7. But it will certainly help. Deal with the longing and anticipation the only way you will actually achieve victory — by focusing on the awesome actors who bring our favorite GoT characters to life.