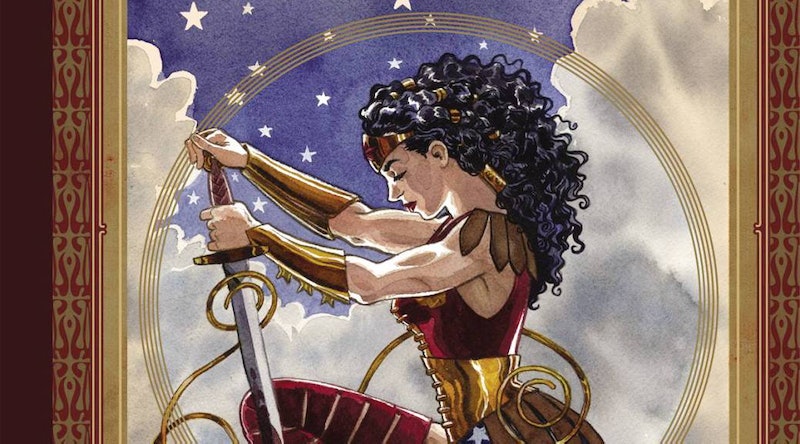 Jill Thompson is an Eisner Award winning artist and writer, and she's reinventing Wonder Woman with her latest graphic novel, Wonder Woman: The True Amazon. With gorgeous watercolor paintings and an original story by Thompson, the book is part superhero origin, part coming-of-age fairy tale, and part Amazon love story, all interwoven with allusions to classic Greek Mythology. Thompson is no stranger to fairy tales, mythology, or DC Comics: she is the acclaimed author/artist of Scary Godmother, and she's worked on Neil Gaiman's The Sandman, as well as The Invisibles, Swamp Thing, and the Wonder Woman series, among other titles.

In her latest masterpiece, Thompson takes on the most iconic superheroine of all time. But the Wonder Woman of The True Amazon isn't quite the Wonder Woman we all know and love. This is a young, hotheaded Diana, utterly spoiled after growing up on an island of loving Amazon aunties, and overconfident in her warrior prowess. Thompson's inspiration for this very different take on the character started when she, herself, was a fierce little girl.

“Well, this might sound a little odd, but when I was growing up I was familiar with Wonder Woman from television,” Thompson tells Bustle. “I spent many an hour spinning and fighting people with my bracelets and lasso, just like everybody else. But I never really enjoyed Wonder Woman comics, because she seemed very perfect to me. I didn’t find her to be very relatable. I very much enjoy fairy tales and all mythology, and the one thing that I kind of thought that she lacked as a character was an Achilles’ heel."

To find Wonder Woman's Achilles' heel, the one flaw that would make her a little more human, Thompson turned to Greek Mythology and traditional fairy tales. "In most Greek Mythology, there’s always some really awful thing that ends up ruining the character in the end, or spurring a character on," she says. "And I decided I certainly didn’t want to ruin a character, but I did want to add another element to it. So it was actually a combination of that thought, and also what I loved about fairy tales, that there was always a haughty prince or a princess, someone in royalty that needed to find out how the other half lived. Like The Prince and the Pauper.”

"I certainly didn’t want to ruin a character, but I did want to add another element to it."

Diana could certainly benefit from some perspective. Thompson's illustrations of young Diana are undeniably adorable, and the paintings of her idyllic Amazon homeland are breathtakingly beautiful, but little Diana is the only child on the island. Growing up so coddled and adored has made Diana vain. “Because I have eight nieces, I’m a very doting auntie, and I thought ‘My gosh, here’s an island full of women who’ve been on this island for hundreds and hundreds of years. The queen herself would like a child. It’s like being on the island of doting grandmas and aunties,'” Thompson says. Having one child to pamper after years of self-sufficiency would be "such this incredible novelty that you end up spoiling that child. And what happens when you've got your haughty prince, and your Greek Mythology, and you’re spoiling a really powerful, magical being?"

Of course, Thompson also drew inspiration from the classic DC Comics. Wonder Woman fans will recognize all of Diana's iconic gear, from her bracelets to her tiara and lasso. “I figured I would just do my take on her origin, and take the elements of her origin that I enjoyed, and just tweak things a little bit. There are so many different versions of Wonder Woman at this point, which I think are great, because Batman has things like that," says Thompson. "I think part of the greatness about DC Comics characters is that you can take the three main character, Superman and Batman and Wonder Woman, and do other things with them. Put them in different eras, or give them a twist, and because their basic stories are so strong, you can adapt them to other places. So I felt like I could mess with her origin a little."

"I figured I would just do my take on her origin, and take the elements of her origin that I enjoyed, and just tweak things a little bit."

At the end of the day, though, Wonder Woman still grows into the hero we all know her to be. "It’s just her motivation for having gotten there is different. She still can go off and be part of the Justice League, and fight for justice and fairness and protect the weak and all sorts of good stuff," Thompson says. “It wasn’t changing her too much, because she ends up exactly in the place where we already know her. And I feel like I pay homage to all of the important parts.”

While the story stays true to Diana's heroic journey, Wonder Woman: The True Amazon also brings a new character into Diana's life: the stable girl Alethea, who just happens the be the only Amazon unimpressed by Diana's showboating and adolescent monster slaying. The character Alethea just sort of "happened naturally," Thompson says, with some inspiration from the author's own romantic past. "I don’t know about you, but usually when you have a crush on somebody, they usually don’t like you back, and it kind of drives you crazy," says Thompson with a laugh. "And I’m assuming, if you’re a very privileged person, and everyone fawns over you, and everyone wants to be around you, it’s so boring to you because you’re used to this type of attention. The attention that’s enticing to you is someone that’s not interested in you at all. And you want to know, ‘Well, why don’t you like me?!’ Or, well, that’s the person I’m interested in, because I know I’ve been interested in way too many people who don’t return my affections. So it’s a little bit personal and a little bit general!”

Grounded, no-nonsense Alethea is the perfect foil to Diana. And Thompson stumbled across the perfect name for her without even realizing it: “I found out from a student of mine who speaks Greek, that Alethea means ‘truth.’ I didn’t do that, other than the fact that I was looking up names for Amazons, and I liked the way it flowed off the tongue. And when I would speak the dialogue out loud, it sounded right.” She's the ideal match for Wonder Woman, with her Lasso of Truth. “To me that meant that I was hooked into something really good," says Thompson, "If I could pull that out of the ether, without trying to.”

"I found out from a student of mine who speaks Greek, that Alethea means 'truth.'"... She's the ideal match for Wonder Woman, with her Lasso of Truth.

Wonder Woman: The True Amazon is a stunningly illustrated, fresh interpretation of one of the world's most beloved superheroes. Thompson hopes that the average reader will find something to relate to in this story of heroics and humility. “Of course, I want them to love it!" she says, "I want them to find it to be a good story, that it might have lessons in it that we can relate to, about consequences for your actions, and about how you treat other people. And what’s really important in life.”