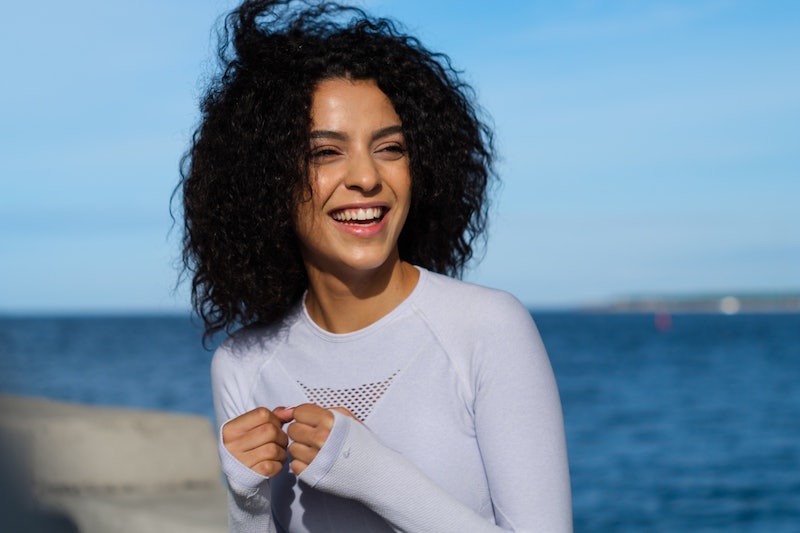 But one of the reasons Bi Visibility Day is so important is that if you're bisexual, it's easy to feel like you don't quite exist anywhere. When you're single or in a hetero relationship, then people assume you're hetero and out of your "phase". When you're in a gay relationship, there's often the assumption that you're just experimenting, and you're not quite welcomed into that group either. It never feels like the right fit. With something as complex and sensitive as sexuality, you want to feel like you fit somewhere, like people understand you. And some people are lucky enough to have that, but a lot of bisexual people aren't so lucky. We hear about people who straight up refuse to date bisexuals (it's a thing) or that we don't exist and it's easy to get down about it — this is why we need days like today.

And this isn't just my opinion, here are seven stats that show just how important Bisexual Visibility Day is, because we really need it:

1. A Third Of Young Americans Say They Are On The Bisexual Spectrum

For everyone out there who says bisexuality doesn't exist, it's time for a reality check. According to a YouGov poll, 34 percent of Americans under 30 identify as not exclusively heterosexual or homosexual. Whether you call it bisexual or use another label, it's time to accept the fact that a whole lot of us are attracted to more than just one gender. So let's get on board.

2. Some Studies Suggest All Women Are Bi

I'm not going to tell people what their sexuality is, but a study from the University of Essex showed images of attractive men and women to 235 women and tracked their physical response. What did they find? "Even though the majority of women identify as straight, our research clearly demonstrates that when it comes to what turns them on, they are either bisexual or gay, but never straight." Just sayin'.

3. Sorry Haters, But Statistically It's Not Just A "Phase"

That's the comment everyone who's bisexual has gotten — either it doesn't exist or it's just a phase. That's total BS. According to Psychology Today, one study by Lisa Diamond found that "very few women who had identified as bisexual in adolescence changed their identity to either straight or lesbian by the end of the study — only eight percent of that group did so. Rather, bisexual women were consistently sexually fluid over time, maintaining attractions to both genders, to varying degrees, over the course of a decade." A decade, people. Does that sound like a phase to you?

4. Most Bisexuals Are In Straight Relationships

Eighty-four percent of self-identified bisexuals in committed relationships are in a relationship with someone of the opposite sex, according to the 2013 Pew Research LGBT Survey. You might think that is an argument that all bisexual people aren't as bi as they claim, but it's not that and that attitude is actually the problem.

A lot of people, even those in the queer community, refuse to date bi people. And with all the bi-phobia generally, I think it really puts people off from exploring their bisexuality. So instead they just act like it isn't there. That has to change.

5. People Think We're More Likely To Cheat (But We Aren't)

One of the most annoying things about being bisexual is the assumption that we're somehow less faithful, but it happens. According to Psychology Today, studies have found that "people tend to perceive bisexual individuals as being more likely to cheat on partners than heterosexual, gay, or lesbian individuals." But the same 10 year study from above found that "89 percent of bisexual women were in monogamous, long-term relationships." Just because we're attracted to more types of people doesn't make us less ethical, it doesn't even affect our sex drives.

6. There Are Serious Side Affects To Biphobia

I know that people — gay and straight— look at bisexuals complaining about not being recognized or not belonging as histrionics. That's part of the problem. According research from The Human Rights Campaigns, "When compared to heterosexual adults, bisexual adults reported double the rate of depression and higher rates of binge drinking. Bisexual adults were also more likely to engage in self-harming behaviors, attempt suicide or think about suicide than heterosexuals, lesbians or gay men." It's a real problem.

7. And We Won't Even Talk About It To Our Doctors

We need Bisexuality Day because we need to be able to feel safe exploring, talking about, and just being bisexual.

More like this
The 19 Best Tweets & Memes About Bisexual Awareness Week
By Lexi Inks
Are Quality Time & Gift-Receiving Love Languages Compatible?
By Lexi Inks
How To Set Rules If You're In An Open Relationship
By Lexi Inks
Breeding Kinks Have Been On The Rise Since Roe V. Wade Got Overturned
By Lexi Inks
Get Even More From Bustle — Sign Up For The Newsletter