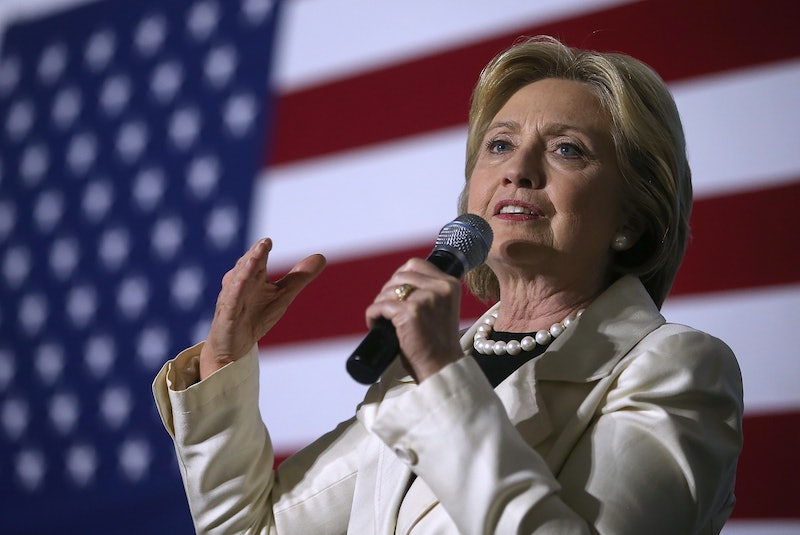 Tonight's presidential debate — the first of the 2016 election — will surely be good fodder for lots of Twitter jokes, as well as a few lightning bolts of fear to our already-fragile election-related psyches. But due to the fractured nature of this election, the debate audience is bound to be larger than usual — experts anticipate that more than 80 million viewers will tune in — which means tonight's debate is also a chance for unsure voters to solidify or switch their allegiance. With both Clinton and Trump dangling by thin margins in the polls, a single statement could change their standings in the eyes of many Americans.

In less dramatic election years (say, any other election year in memory), some political scientists have argued that the debates actually have little effect on the outcome of the election — as Washington Monthly reported in 2012, political scientist James Stimson found no evidence that any presidential debate had changed the outcome of any election between 1960 and 2000, stating, "There is no case where we can trace a substantial shift to the debates.” Overall, most people have already made up their mind prior to watching the debates, which serve to strengthen or weaken their trust in their chosen candidate.

However, since the first televised debate — the infamous "Kennedy vs. Nixon" in 1960 — there have been several sparring matches that seemed to turn the table towards or away from a candidate, whether it be due to a significant gaffe, some visibly inappropriate body language, or a reversal of previously assumed stereotypes about the candidates.

1976 was a tough year for Gerald Ford. He took up the mantle of president in 1974 after Nixon's impeachment, but two years into his term, people were already frustrated by the lack of government transparency and a weak economy. He tried to present a confident front at the debates against Jimmy Carter, but his facade quickly backfired.

Ford was asked about the relationship between the U.S. and the Soviet Union, and replied with a long and convoluted answer that ended with: "There is no Soviet domination of Eastern Europe." He said this despite the fact that at that point in time, the Soviets...dominated Eastern Europe. Nearly every Eastern European country was behind the Iron Curtain.

Today, it's generally acknowledged that Ford was attempting to make a metaphor about his lack of belief in the power of the Soviet Union (one that unfortunately failed miserably); but he refused to back down from the statement even when confusion from the audience was palpable.

Time called Ford's statement “the blooper heard round the world," and he started to fall in the polls immediately following the debates. People who followed the administration closely knew that Ford did indeed understand world politics, but his mistake was enough to lose trust among those who hadn't spent as much time studying his record.

This situation shines light on an aspect of the debates that is often overlooked: they're a preview for the fact that when you become president, every sentence you say is heard by millions of people, so even a small mistake can have drastic consequences on public opinion.

In the 1988 presidential debate between then-vice president George H.W. Bush and Massachusetts governor Michael Dukakis, journalist Bernard Shaw was the moderator. He was a notoriously tough reporter — according to Roger Simon, writing in Politico, "Shaw was not your average journalist. Shaw really liked to see the candidates sweat. He liked to see the panic in their eyes."

Governor Dukakis prided himself on his stance against the death penalty. So Shaw asked him: “Governor, if Kitty Dukakis were raped and murdered, would you favor an irrevocable death penalty for the killer?”

BTW: Kitty Dukakis was not the Governor's beloved cat; she was his wife. So we can partially blame Bernard Shaw for coming up with such a mangled question.

Dukakis responded without pausing: “No, I don't, Bernard. And I think you know I've opposed the death penalty for my entire life.”

If the audience was shocked by the initial question (and they were — gasps were audible), they were truly flummoxed by Dukakis's response. As Time noted, "to viewers the answer seemed both dispassionate and dismissive."

Later in the debate, Margaret Warner, a journalist at Newsweek told Dukakis "The American public admires your performance but didn't seem to like you much." It's obvious that Dukakis thought his stoic words would show how he stuck to his guns — but instead, his response struck many viewers as unemotional and, well, creepy.

Before the 2011 Republican Primary, Rick Perry seemed like a very viable Republican candidate. As Jeffrey Jones wrote in Gallup, "Texas Gov. Rick Perry has emerged as rank-and-file Republicans' current favorite for their party's 2012 presidential nomination." And then, he spoke. Perry's early comments in the debate included discussing the three government agencies he would eliminate if elected. Well, he claimed he was going to talk about three government agencies. He ended up only naming two, and couldn't remember the third:

"Commerce, education, and the um...what's the third one there...let's see..." he thought for a minute, then sparred with another candidate and one of the moderators, then finished with an eloquent "Oops."

This, combined with a series of questionable speeches, caused Perry to drop out of the race shortly after. But the impression that he wasn't an intelligent candidate followed him for years, to THIS Republican primary. He was consistently mocked for wearing glasses in an attempt to shift his image — "So who's Texas Gov. Rick Perry wearing as part of his bookish new look?" the Associated Press quipped in August 2014.

If you Google "Rick Perry oops," the first result after a clip of the debate is an article from the Washington Post: "48 seconds that define Rick Perry's political career." I wonder what Perry has to say to the political scientists who say that debates don't matter.

In 1984, the most influential debate was actually between the vice presidential candidates. While the content of the debate was relatively run of the mill, it was nevertheless a huge milestone in American politics, because it was the first televised debate to feature a woman running for one of the top two public offices.

Geraldine Ferraro was the vice presidential candidate for the Democratic party, running with presidential candidate Walter Mondale against incumbents president Ronald Reagan and vice president George H.W. Bush. Commentators at the debate attempted to question her suitability for office: "Congresswoman Ferraro, your opponent has served in the House of Representatives, he's been Ambassador to the United Nations, Ambassador to China, Director of the Central Intelligence Agency and now he's been Vice President for four years. How does your three terms in the House of Representatives stack up against experience like that?"

Ferraro fired back: "Well, let me first say that I wasn't born at the age of 43 when I entered Congress."

Later, Bush snuck in a snide remark implying that she didn't have foreign policy knowledge. Instead of kowtowing to the pressure, Ferraro held her ground:

"Let me just say, first of all, that I almost resent, Vice President Bush, your patronizing attitude that you have to teach me about foreign policy."

In that moment, Ferraro solidified that she was not going to be walked over by a room full of men. She went on to remain strong when pundits attempted to contrast her Roman Catholic faith with her pro-choice stance on abortion.

This debate was a bird's eye view of the struggles that women in politics (and most other areas of life) face in being seen as capable and taken seriously. Ferraro paved the way for later female debate candidates — some who performed questionably in the debates, of course, but also for dear Hillary, who will hopefully verbally slay in tonight's debate.

When Al Gore was running for president against George W. Bush, he often appeared pretty frustrated by his competition. And he made this very obvious by the way he acted during the debates: he audibly sighed over and over again, showcasing his frustration in what was perhaps not the most mature manner.

Full disclosure: if I were ever running for president, this would absolutely be my problem in the debate. Frustrated sighs, and probably a bunch of inappropriately timed eye rolls.

Gore's ostensibly uncomfortable actions made the temperature rise in the room (and, in a way, around the earth — many experts think that we'd be in a much better state with regards to global warming if Gore had become president instead of Bush) and they also made viewers feel sympathetic towards Bush, who, in an uncharacteristic moment, didn't make any large gaffes.

When Bill Clinton was debating against incumbent president George H.W. Bush, Clinton earned a boost in the polls when Bush made what seemed to be a visible display of his irritation during the audience question portion of the evening.

After a viewer asked how the national debt had personally affected the candidates, Bush took a nice long look at his watch. The answer that followed was generalized and distant — he said, “I think the national debt affects everybody,” even when the audience member pushed him for more information about how the debt had impacted him personally.

In contrast, when Clinton took to the stage, he answered the question with personal stories and empathy. Bush's lackluster response amplified Clinton's caring one, and Clinton's answer is often spoken of as one of the strongest moments in debate history. It's usually very difficult for someone to overtake an incumbent candidate, but this debate helped Clinton swing ahead in the election and disrupt Bush's presidential cycle.

Aside from being the first televised debate in campaign history, this one is also often lauded as the most influential.

Coming into the debate, Nixon was the favored candidate — he had two successful vice presidential terms under his belt, and had earned much of the nation's trust due to his victories against communism. "Richard Nixon, the Vice-President for nearly eight years, was far more widely known than Democrat John F. Kennedy, the junior Senator from Massachusetts," Earl Mazzo wrote for The Great Debate, and prior to the debate, Nixon was gaining ground in the polls. Kennedy had barely any foreign policy experience and was only 43 — extremely young for a presidential candidate (he remains the youngest elected U.S. president in history).

But Kennedy sauntered in to the debate looking suave, polished, and confident, while Nixon, tired from campaigning all day and recovering from an infection, refused offers from TV producers to freshen up his haggard appearance with makeup, though according to CNN,"one of his staff dabbed his face with something called LazyShave, which was supposed to hide his five o'clock shadow."

Viewers were wowed by Kennedy's personal presentation, and in comparison, Nixon looked lazy and unprepared. It showed how television change public perception — people who listened to the debate on the radio said that the men both debated well, but for television viewers Kennedy came out far ahead — the Museum of Broadcast Communications Encyclopedia of Television states that "Studies of the audience indicated that, among television viewers, Kennedy was perceived the winner of the first debate by a very large margin."

The victory on television showed in the polls — after losing a percentage point in the weeks leading up to the debates, Kennedy gained three points in the following week alone.

This first televised presidential debate, to this day has some of the highest viewer counts in history. But I'll bet my framed photo of college-aged Hillary that tonight's face-off will give Nixon vs. Kennedy a run for its money!

More like this
The 7 Best White Face Paints For Halloween In 2022
By Maria Cassano
Here’s What It Means If You See 222 All The Time
By Nina Kahn
The Spiritual Meaning Of Angel Number 444, Explained
By Nina Kahn and Kristine Fellizar
15 Halloween Costumes Inspired By TikTok Trends
By Emma Carey
Get Even More From Bustle — Sign Up For The Newsletter