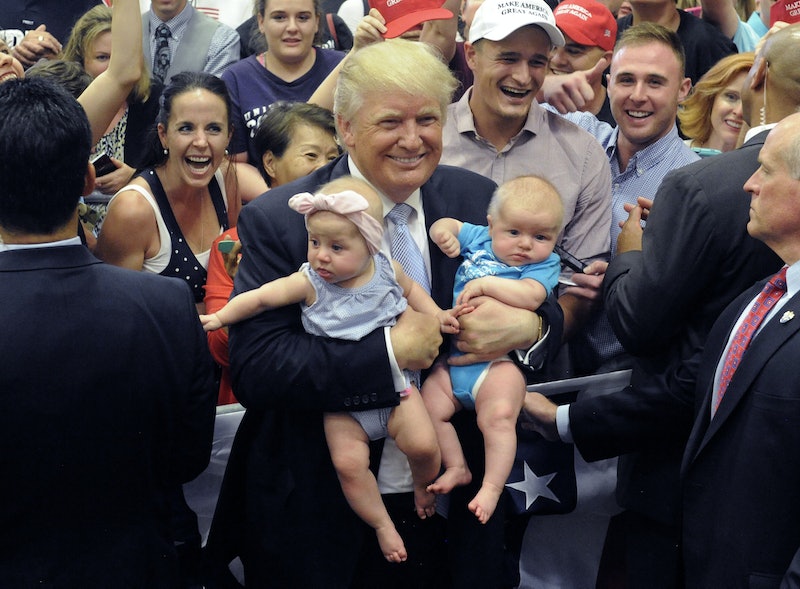 Donald Trump won't find out if he can make America great again until Nov. 8, but parents who want to make Halloween great again (sarcastically or not) may look to Trump for some pre-Election Day inspiration. It's not for his anti-immigrant policies or his outspoken personality, but rather for his characteristic appearance and wardrobe. These Trump Halloween costumes for babies are undeniably cute and funny, no matter what side of the aisle you prefer.

Your baby probably won't master the New York accent or the affinity for the word "huge" any time soon, but that's OK. The first step in any Trump costume is, of course, to master the hairstyle. If your baby was blessed with voluminous blonde locks from birth, then all you'll need for this first step is a good comb. If not, you'll have to help your baby achieve Trump's toupee-like combover with one of the many imitation wigs out there for sale. This particularly cartoonish option from Etsy comes in kids' sizes, while this option from Amazon is size-adjustable.

"Traditional Trump" is the costume for no-nonsense babies. They can go from the boardroom to a press conference without missing a beat — and without having to change outfits. To get the look, pair your baby's Trump hair with a standard black suit, white shirt, and tie of your choice. (See above for why you should consider the red tie.)

This five-piece formalwear set from Amazon could do the trick. Just save the vest and the black tie for those fancy cocktail parties around the holidays.

Assuming you're after a red tie, consider this option from Littlest Prince Couture. It's Trump's signature color, and it's a zipper tie, meaning no tantrums while Mom or Dad is trying to wrestle with a real tie.

Any true Trump baby should don a politician's American flag pin like this one from PinMart. Just remember to monitor your baby carefully while he or she is rocking this patriotic — but sharp — accessory.

If "Traditional Trump" isn't creative enough for your baby, add another meaningful accessory to the ensemble. For this outfit, refer to steps one, two, and three above, then find a McDonald's bag or container that your baby can use to collect goodies while trick-or-treating.

If you don't feel like heading to your nearest drive-thru window, this tote bag from Redbubble is a creative substitute.

When your tyke isn't feeling the suit ensemble, just find as much "Make America Great Again" (MAGA) apparel as you can. Combined with the Trump hairstyle, there will be no mistaking your baby's costume.

Zazzle offers a seemingly endless supply of Trump-themed onesies. They come in just about every color and style, so you can show some of your baby's personality along with Trump's mantra.

If you're not opposed to directly supporting the Trump campaign, you may want to complete your baby's look with some official campaign swag. Trump's campaign website sells buttons — including those pictured above — and hats, among other things.

These days, everywhere Trump goes, the U.S. Secret Service goes. Since you'll need to accompany your baby on Halloween anyway, why not complete the campaign look by dressing up yourself, too?

If you don't already have a black suit or pantsuit you can wear, try this one-size-fits-most costume from Target. (You can also go to your favorite stores to find black dress pants and a blazer that you can wear again sometime.)

In a pinch, any black sunglasses will do, but these costume glasses from Bartz's are just what any secret agent costume needs.

Keep the MAGA hat — and the Trump wig, if you'd like. Then, add a train costume — trust me, they're a lot easier to find than they sound. This one from Toys "R" Us should do the trick.

This one may take more DIY effort than the others — but do it for the pun.

Fair warning, this is probably a lot more difficult than finding that train costume. HalloweenCostumes.com has a playing card costume for kids, but it may be too big for a baby. Bonus points if you get two pieces of poster board and string them together with yarn.

Adorn your baby Trump card with MAGA buttons, stickers, or a hat. Then, meet your Halloween secret weapon.

If your baby is more Ivanka than Donald, ditch the suit and wig for a classier look. Trump's older daughter has become one of his most important allies throughout the campaign, as she has helped him to seem more moderate on many issues. In all her public campaign stops, Ivanka presents herself as classy and timeless.

Swap the Trump suit for an elegant white dress, like this one from Kohl's. Keep the Trump-themed button if you want to make the look a little more convincing.

Thanks to Trump's wild and unconventional campaign, there are plenty of ways to get creative with a Trump costume. Regardless of your political affiliation, there's no shame in dressing your baby up as this election's controversial candidate. After all, if there's anybody who's going to look cute in a fake blonde wig and an obnoxious red hat, it's a newborn.