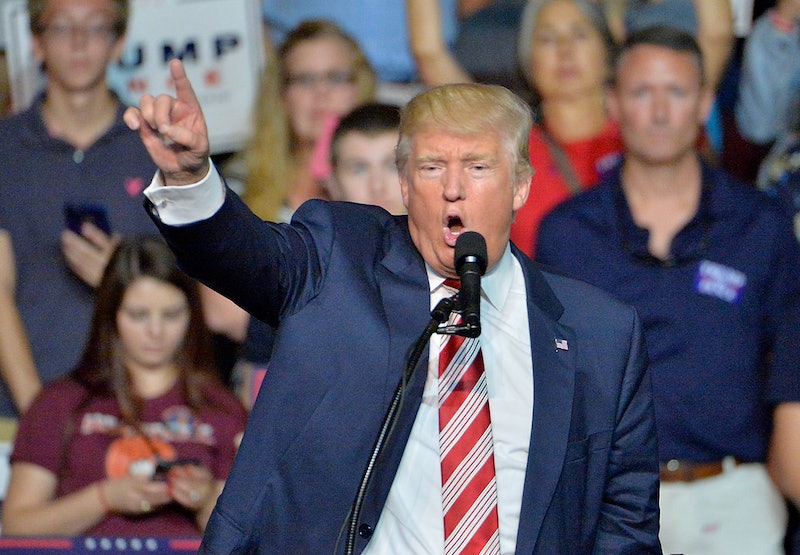 Politically relevant Halloween costumes are always a hit during an election year, and this year is definitely no different. With so much ridiculousness happening in American politics, the country's potential leaders will definitely be a hot topic to make fun of, especially so close to Nov. 8. That being said, if you're thinking of dressing up as a certain Republican presidential candidate, it's really easy to be offensive. Donald Trump has spread a lot of harmful rhetoric throughout the last 15 months of his campaign, and even if you're genuinely trying to make fun of him without endorsing any of his views, you don't want to just be the jerk wearing a Make America Great Again hat at the party. As a solution to your problem, here are seven Donald Trump Halloween costumes that are actually funny and probably won't offend anyone too badly.

Granted, that's no guarantee that someone won't still take issue with your costume. From women to African Americans to Latinxs, Trump has brutally attacked a decent chunk of the world's population, and both those who have been insulted and those who are allies with them might not take kindly to even these satirical costume choices. If you choose one of these outfits for Halloween, be forewarned that people might not react well. But with the right perspective and attitude, you can still feel good about pulling off one of these costumes — just make it abundantly clear that this is a mockery and not an endorsement.

This all-essential wig will go with any of the following Trump costumes, so if you're considering it at all, pick one up ASAP. I suspect they will be a popular item this Halloween and might get sold out early.

All you need is overalls, which are totally wardrobe essentials anyway, and a plain white t-shirt. Quick and dirty.

Last two things are the hat and the pitchfork, both relatively easy to acquire. This straw hat from Party City is only $3.

Most costume pitchforks are for devil costumes, but there's a certain appropriateness to that, so pick one up from Amazon.

This costume can either be a standalone or in a pair. If you've got a friend who wants to play Fallon, get ready for both of you to suit up.

You've already got the wig figured out, so next up is the suit. This suit will work for any of the other costumes too, so refer back to this one if you decide on any of the others.

Then add the white collared shirt.

Next comes the suit. It's going to be on the expensive side, but you can always reuse it for work.

If you're also doing Fallon, you can buy the exact same suit with this blue collared shirt and striped tie instead.

You're gonna need a hair product to keep your wig from getting too unruffled, so use a light hold hairspray that won't mess up the wig too much in case you want to use it for later. Buy it online or at your nearest drug store.

Then let everyone at the party ruffle your hair.

This surprisingly cheap steak suit will suit your purposes perfectly.

And all that's left is the branding. Just print out the logo and tape it onto your suit, and you're good to go.

You can also choose whether or not to use a Trump wig, but it's not essential to the costume. You're a Trump steak, not Trump as a steak after all.

This one is a group costume, which are notoriously hard to coordinate, but the payoff will be great if you can pull it together. You'll need three people: A Trump, a Miss USA, and a Miss Universe.

Pick up a couple metal buckets from Amazon, and after Halloween you can use them as apartment decor.

Next, reuse a couple of plastic water bottles and slap the Trump Ice logo on them.

No need to get fancy with wrapping or laminating — just tape the picture onto the bottles.

Start with the sashes, since you'll need to paint those with fabric paint and it could take some time to dry.

Any simple black fabric paint, like this one, will do, so purchase a bottle online or from your local craft store.

You'll need to write "Miss USA" on one sash and "Miss Universe" on another, and seriously, give them plenty of time to dry (24 hours or more is preferable).

Next, you'll need the actual clothes. For the Trump suit, make sure it's all stuff you won't mind getting wet. Miss USA is wearing a black cardigan and blue sundress like these ones,

and Miss Universe has a white peplum top and a blue pencil skirt.

Don't worry about the shoes, since they'll probably get wet. I recommend using this in a warmer climate, since the Trump of your group will be wet for a significant portion of the night. This costume will work especially well if you're hosting a party at your own place, because then you don't have to carry the buckets out with you, and they can make cute coolers for the fiesta.

This one could be a solo, doubles, or even group costume. Obviously you need a Trump, but that doesn't require much more than his regular suit.

Trump was wearing a pink tie, not a red one, when he participated in Wrestlemania 23. It doesn't matter too much, but you should always strive for accuracy.

The shaving cream is necessary for the solo costume, both for accuracy and for having a shaving cream fight at your party. Remember, Trump gets a little dollop on the bottom left corner of his face — very important for historical accuracy. Pick up a few cheap bottles like this one at your local drugstore.

If you decide on the doubles' costume, order this bald cap on Amazon for whichever one of you decides to play Vince McMahon. They'll also need a suit and the same pink tie as above. As a bonus, you can pie each other in the face with the shaving cream too.

If you are going for the group option, add in a referee or two to get the authentic Wrestlemania feel. Purchase the shirt and sub in any pants you want — black is standard, but jeans, white pants, or really anything else works too.

One of the funniest and most popular memes to come out of this election season is the joke about Donald Trump's hands. This costume is more about the principle of the thing than whether or not his hands are actually small — Trump seems to care more about the size of his hands than giving straightforward answers to many campaign questions.

I can hardly think of a more worthwhile purchase than a pair of baby hands. Not only will they serve you well for the rest of election season, but you can also reuse them for future Halloween costumes and prank your friends and family year round. Just combine them with the wig and suit and you're good to go.

This one is a throwback to one of the wilder moments of primary season, when Ted Cruz clapped back at Trump's comments about Cruz's father with a birther claim of his own. Trump's mother was a Scottish immigrant, so it's a great commentary on some of his more hypocritical stances. Also, it would just be hysterical to see Trump wearing a kilt.

This incredible kilt costume will go perfectly with your Trump wig and suit jacket (the dress shirt is optional, as the picture shows).

These are a little trickier to find, and you might want to order them ASAP if you're planning on this costume. But seriously, you'll be the hit of the party. Who doesn't want to see Trump try to play the bag pipes?

Another one of the best jokes to come out of this election season is John Oliver's impeccable Donald Drumpf segment. Not only will this be one of the biggest hits at the party, it'll give everyone a subtle reminder that he's not as great as his name may suggest.

If you just wear the wig and suit, this is pretty much the only addition you need to turn your costume from Donald Trump to Donald Drumpf. However, you can still take it to the next level too.

This is optional, but it really drives the point home. Plus, if Trump does end up winning the election, you'll blend right in when you move to Germany.

These spectacular costumes are an actually funny way to incorporate some political satire into your Halloween experience this year. Trump is easy to make fun of, but it's still important to make sure that other people aren't too upset by your actions. Any of these costumes should make a great hit at your Halloween party this year, so get ready to have some good laughs and lots of political discussions.