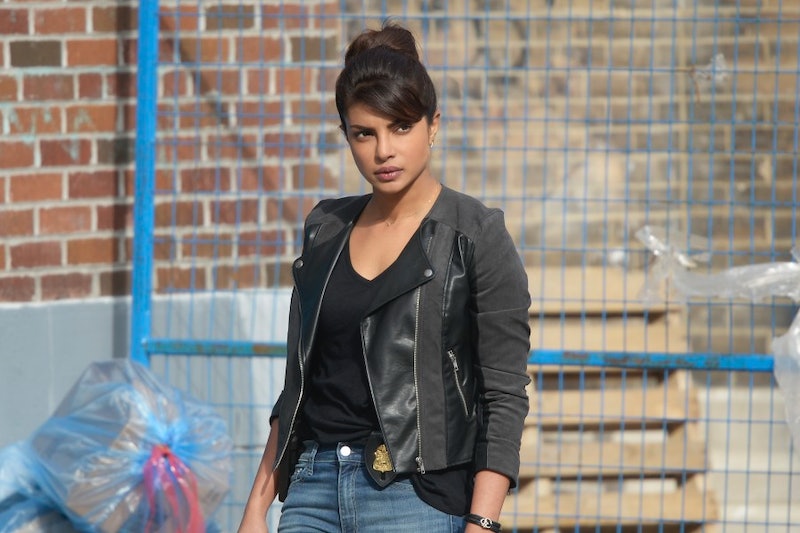 It's official: Alex isn't working for the FBI anymore on Quantico. At least, that's what it looks like at the start of Quantico 's Season 2 premiere, "Kudove." As far as the world is concerned, Alex Parrish left the FBI after taking down Liam O'Connor's terrorist plot last season. Now, she's a free agent, working a desk job at the CIA, waiting to be called on to train to be an agent. In the Season 2 premiere, which picks off six months after Season 1 left off, Alex finally gets invited to the Farm (CIA training facility). So, Alex joins the CIA in Quantico 's Season 2 premiere, but what about Ryan?

Breathe easy, shippers, Alex and Ryan are still together in Quantico 's season premiere. But, it's clear that their relationship is as rocky and complicated as ever. Like Quantico's first season, Season 2 takes place in two times: the present (or future) and the past (or the present, depending on how you look at it). In the past, Alex and Ryan are totally in love, though still lying to each other: Alex lies to Ryan about working for the CIA, even if it is just a desk job, and Ryan has to keep Alex in the dark about his work as an FBI agent. But, even with the lies, they're happy. That is, until Alex and Ryan are both recruited to join the CIA and learn that they are both on a mission from the FBI to infiltrate the CIA recruits!

So, it turns out Ryan and Alex were given the same mission by the FBI (despite the fact that Alex technically doesn't work for them anymore): infiltrate the CIA and get recruited by a group of anarchists within the CIA who want to take the law into their own hands. Now, in the present, it seems that this group, called the Citizens' Liberation Front, takes over the G20 Summit in NYC and forces international governments to pardon criminals, and is responsible for the big terrorist attack of the season. Also taking place in the present timeline: Alex and Ryan are broken up. Now, it could just be pretend — at CIA training, they have to pretend not to be in a relationship — but it looked pretty chilly when they met in the premiere.

Still, fans of Ryan and Alex should rejoice in one thing that happened this week: Ryan proposed to Alex in the Quantico season premiere. After they realized they shared the same mission, Ryan got down on one knee to prove that, no matter how much he has to lie for the mission, he will always be loyal to her. She stops him before he can really propose, and tells him to give her the ring when their mission is over.

Something tells me it doesn't go as planned...