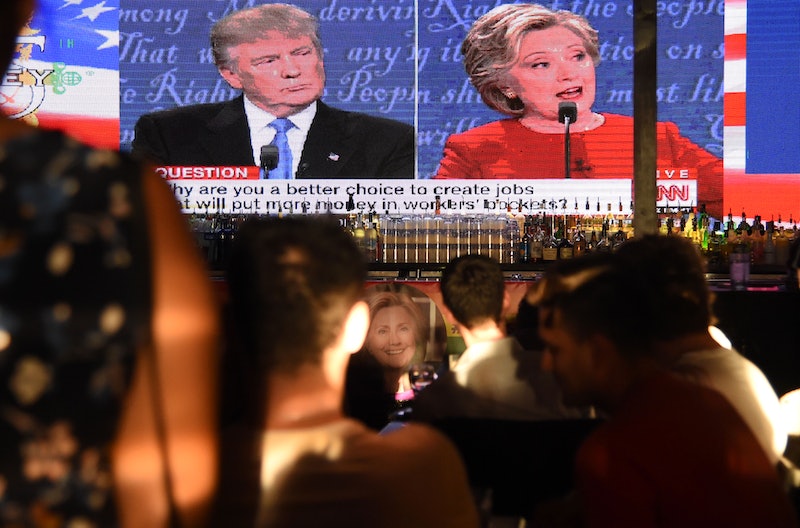 With mere weeks left to election day, Donald Trump, a man with zero political experience and limited policy knowledge, is within a hair's breadth of the Oval Office. In understanding Trump's wild and confounding political success, the general consensus is that he's tapped into the anger of white men who fear the loss of their identity and economic clout in the face of a changing America, and by railing against Mexicans, Muslims, immigrants, women, and liberals, Trump managed to win the fierce loyalty of a demographic that politicians have long neglected. But as conspiracy theories about Trump being a Hillary Clinton plant resurface, it bears noting that it doesn't matter if these theories are real, because Trump's supporters — the shamelessly racist, sexist, and xenophobic ones who have found in him a ringleader — most definitely are.

One year into his candidacy, and the "Trump effect" has already impacted American children. In Indiana, students from a predominantly white high school held up Trump signs and chanted "build the wall" at kids from a mostly-Latino school during a basketball game. In Fairfax County, Virginia, third-graders told their "immigrant" classmates that they would be "sent home when Trump becomes president."

A report from the Southern Poverty Law Center on the "Trump effect" collected more of such accounts from teachers from across the country that affirm how the candidate has negatively affected racial relations in the classroom.

So not only has Trump emboldened bigots to openly express their beliefs, he has also cultivated intolerance among the young and impressionable. And contrary to some of his supporters' protests, Trump's inflammatory rhetoric is not different from that that existed during the time of state-sanctioned racism — just because you're rebranding as a racialist doesn't mean that you're not actually a racist.

One of the most dangerous aspects of Trump's political rise is that the country is at risk of electing a volatile, egotistical, inexperienced person as president. But perhaps equally alarming is that he has endorsed precariously extreme beliefs; how else did the "alt-right" go mainstream? The answer is Trump: retweeter of white supremacists, peddler of Clinton's health conspiracies, loudspeaker for bigotry and misogyny.

The real question here, then, is not whether Trump has been working for Clinton to get her elected this entire time; it is who will these disaffected white voters with their newfound political exposure turn to next for guidance? David Duke, perhaps?