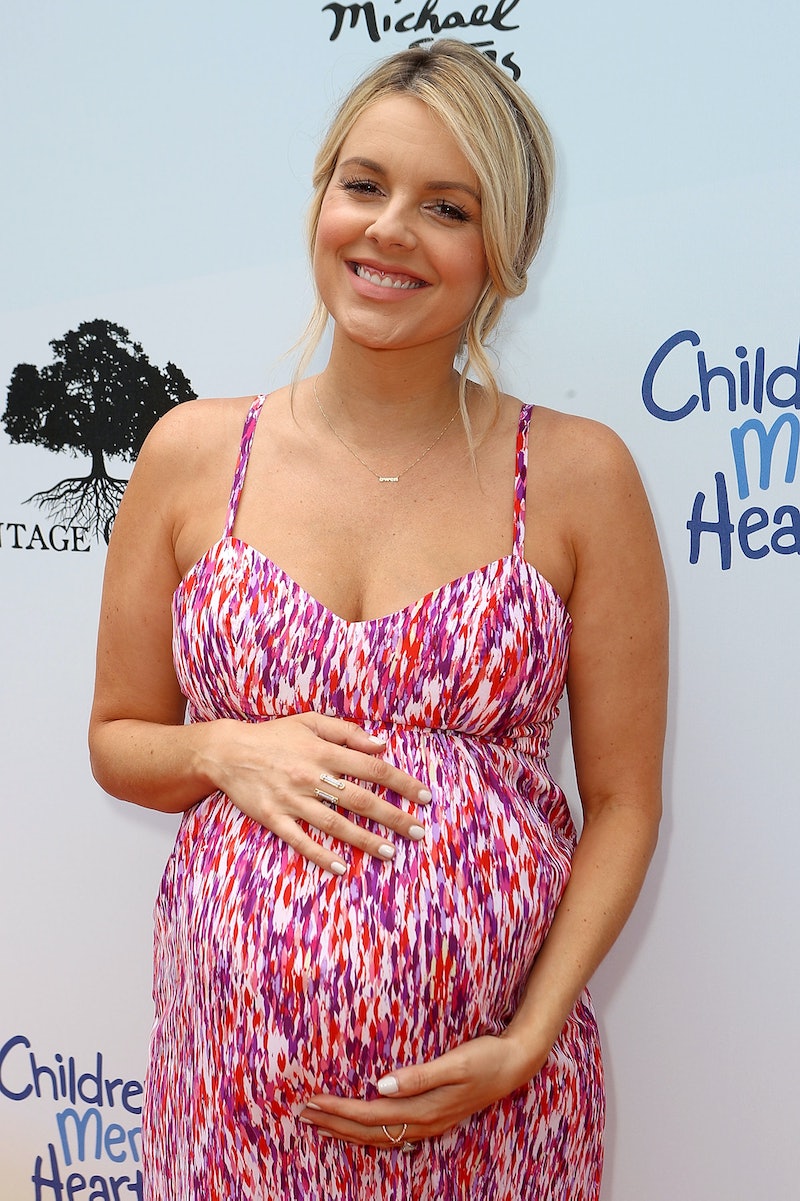 Former Bachelorette Ali Fedotowsky has recently become the proud mom of newborn Molly with fiancé Kevin Manno. But even with a full schedule of being a new mom, Ali has found the time to watch and enjoy Bachelor in Paradise Season 3 last summer. In an interview with Bustle, Ali Fedotowsky weighs in on the Bachelor in Paradise 3 couples, and she says she's a big fan of all of them — even Josh Murray and Amanda Stanton — and the choice of Nick Viall as the next main man on The Bachelor. "I watch everything," she tells Bustle. "I watch all the seasons and I just watched Bachelor in Paradise ... Three couples are engaged, and I think that's so awesome."

The Season 6 Bachelorette star gushes about the latest season of the summer series and says she was delighted by the engagements of Josh and Amanda, Evan Bass and Carly Waddell, and Lace Morris and Grant Kemp. She herself hasn't appeared on Bachelor in Paradise, but that didn't stop her from tuning in. After all, she knows the show and its contestants pretty well having been a contestant on Jake Pavelka's season of The Bachelor before becoming the Bachelorette in 2010, during which she got engaged to Roberto Martinez. The pair ended their engagement in 2011, but Ali was able to find love and happiness outside of Bachelor Nation with her fiancé Manno, who is a radio and TV host.

And, she may be happily taken, but she still loves watching the show she was once a part of and its many spinoffs. Here's what she thinks about this BiP season's big moments.

Ali gushes about loving Carly and Evan's love story, which had its awkward moments, bumps in the road, and even hospital visits. But, ultimately, the couple ended up engaged in the finale and Fedotowsky says she enjoyed watching their love flourish on Bachelor in Paradise.

"I love Carly," Fedotowsky says. "I think she's so fun. Evan and her have the cutest story of how they got together. Them being together, then not. We're wondering why she's into him and thinking she's so weird she loved all this weirdness. I think they're just so adorable and I love them."

Even as one of the more controversial couples in Mexico, Fedotowsky says she thinks this pairing will work out better than Josh's previous engagement to friend and former Bachelorette Andi Dorfman. "Amanda and Josh seem to fit really well," Fedotowsky says. "[Amanda and Josh] seem like they're a great couple together ... Were Josh and Andi right for each other? Absolutely not. When you're in a bad relationship, it brings out the worst in you."

She continues: "I love Andi and she's a great person, but I think she and Josh were not right for each other. I think Josh and Amanda are. I'm happy for them and I think they make a great couple."

This Paradise couple would be happy to hear that Fedotowsky calls them by their proper couple name: Grace (a combination of their names), which Lace and Grant each have tattooed on their respective bodies. "I think they perfectly complement each other," the former Bachelorette says. "I think they're super cool."

As for new Bachelor Nick, Fedotowsky says she's rooting for him all the way. She recalls that she interviewed him on her blog AliLuvs and had been on his side even while he was disliked by fans after Andi's season, during which he finished as runner-up to Josh. "I've been a fan of Nick from the beginning," Fedotwosky says. "I've always known he was a good guy and I'm glad everyone else sees that now, too. He definitely deserves love and it's about dang time we find it for him."

She knows that being in the spotlight as the new Bachelor or Bachelorette is a tough job, but she says she hopes that Nick continues to follow his heart. "I think you just have to trust your gut when you're on the show," she says. "If the right person is there for Nick, he'll find a way to make it work out. But if the right person isn't there, you can't make it work no matter how hard you try. My biggest advice is that if it's not working on the show, recognize that and let it go."

That sounds like a good tip from someone who has been through it all before and came out the other side better than ever with an adorable daughter and a sweet fiancé — even if she didn't find him on the show.