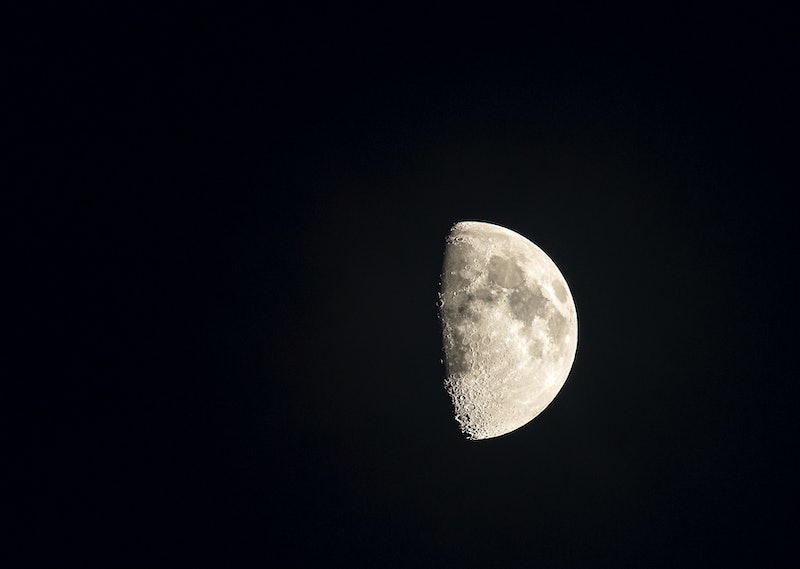 There isn’t much that I’m sure about in this increasingly bananas world of ours, but right now, I know at least two things for certain: One, there is a very special kind of new moon happening on Sept. 30 called a Black Moon; and two, figuring how to “see” the Black Moon is a lot easier than you probably think. Or at least, it was easier than I thought it was going to be — which is perhaps to be expected, given that the last couple neat-o celestial events that have occurred haven’t exactly been visible from where I am.

I know, I know — why have I put “see” in quotation marks? Aren’t they unnecessary? Am I contributing to the “problem” of “people” using “too many” “air quotes?” Not in this instance, I would argue, because the whole thing with a Black Moon is that you kind of, um, can’t see it. Sure, you can go out to witness it; you just won’t actually be able to see the moon, because it will be shrouded completely in shadow. Hence, “see.” In quotation marks. Totally justified.

Maybe I should back up for a minute, though. What exactly is a Black Moon? In essence, it’s just a new moon — that is, the first of the moon’s four primary phases, during which the Earth-facing side of it is all shadowed over and therefore not reflecting the light of the sun back at us — but what makes it particularly notable is the fact that a new moon is only a Black Moon if it’s the second new moon to occur within a single calendar month. Apparently this happens about once every two and a half years, so while it’s not super rare, it’s still a little unusual. And that? Is pretty cool.

So how exactly does one see-but-not-see the Black Moon? Easy. It pretty much just amounts to looking up at the sky this Friday night, but in case you want a little more info, here’s what you need to know:

1. Get Yourself To The Western Hemisphere

I realize this is a tall order for anyone who doesn’t already live here, but this new moon is only a Black Moon for the Western Hemisphere. In the Eastern Hemisphere, the new moon doesn’t occur until after midnight on Oct. 1 — which means that, since it’s no longer in September, it isn’t a Black Moon anymore. But don’t worry; you’ll have your chance to see a Black Moon soon, too, Eastern Hemisphere dwellers. Yours will be coming either on Oct. 30 or Oct. 31, depending on where you live.

2. Go Outside At The Right Time

The official moment the Black Moon makes its appearance is at 8:11 p.m. EST, so if you really want to Do The Thing, that’s when you should do it. However, what you’ll be able to see with the naked eye all night will look so similar to what’s happening at exactly 8:11 p.m. EST that, for all intents and purposes, they’ll be indistinguishable from each other. As such, if you’re not able to be outside at precisely the “right” moment, whenever you are able to get out there should be good enough.

Seriously. That’s all you need to do. Turn your eyes skyward. And then….

4. Behold! A Gaping Hole Where The Moon Usually Sits! Quake And Tremble In Fear!

OK, maybe don’t quake and tremble in fear, because there’s nothing to be afraid of here; it’s just a new moon, after all. That said, though, it’s still usually pretty wild to look up, expecting to see the moon, and then find absolutely nothing, so ahead and run with it if you like.

It’ll probably help if you happen to be in a place with little to no light pollution; just as the lights of the night sky are always more apparent when you’re somewhere secluded, the absence of light is also similarly notable. When the only light you have available comes primarily via the moon… well, let’s just say that without the moon, it’s a whole lot harder to see what you’re doing.

And that's all there is to it! Your next chance to see a Black Moon in the Western Hemisphere isn't until July of 2019, so seize the day. Or, y'know, night. Whatever.

More like this
Why Experts Say Sleeping With A Fan On Isn’t Totally Risk-Free
By Sophie McEvoy
The 6 Best UV Umbrellas, According To A Dermatologist
By Rachael Green
August 2022 New Moon Do’s & Don’ts
By Brittany Beringer
Your Daily Horoscope For August 18, 2022
By Alexandria Lettman
Get Even More From Bustle — Sign Up For The Newsletter