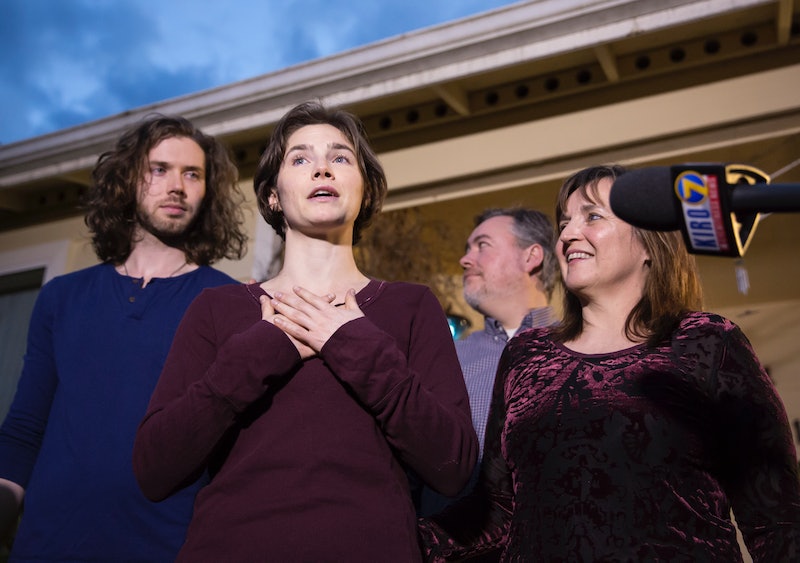 Amanda Knox, Netflix's newest true crime documentary, isn't really about a crime. Yes, there is a murder at the center of the film — the 2007 death of Meredith Kercher — but the documentary focuses more on how Amanda Knox, Kercher's study abroad roommate in Perugia, Italy, was accused and convicted of the murder in the midst of a media circus in 2007. Released in 2011 after spending four years in an Italian prison, Knox was officially exonerated by Italian courts in 2015 and currently resides in Seattle, Washington, where she agreed to be interviewed by filmmakers Rod Blackhurst and Brian McGinn. What Meredith Kercher's family thinks of the Amanda Knox documentary, however, is not known, as Kercher's relatives chose not to participate in the new film.

Kercher's family has not yet commented on the Amanda Knox documentary, at least publicly, and it's unclear if they intend to. While Bustle attempted to, we were unable to contact the Kercher family for comment. Kercher's parents, John and Arline, have both publicly stated that they feel Knox should still be in prison. After Knox's conviction was officially overturned in 2015, Kercher's family released a statement calling it "a defeat for Italy's justice system," The Guardian reports. So it's not surprising that no member of the family agreed to participate in the documentary or is talking about it now.

It's clear that the Kercher family wants to keep themselves out of the Amanda Knox conversation, and we should respect their wishes. The fact is that their daughter was murdered in 2007, and most of the media coverage since Kercher's death has been not about Kercher, but Knox. It's something Blackhurst readily admitted in his interview with The Guardian, saying, "Meredith's death became all about Amanda." For Blackhurst, the point of the documentary is to expose how the case against Knox became "entertainment," not to solve the murder. It would make total sense, then, for Kercher's family to not want to participate in that kind of film.

Knox might get closure from her ability to tell her story in Amanda Knox, but the Kerchers are still struggling to move on. "The hardest thing that we have had to face is that there will be no conclusion, not having a definitive ending to this tragedy," Stephanie Kercher, Meredith's sister, told Quotidiano.net after Knox's exoneration in 2015 (via Daily Mail). Netflix's new documentary unfortunately won't provide them with any answers; all it will likely do is remind them of how their daughter's memory has been eclipsed by the sensationalizing of her accused murderer. I say we let the Kercher family mourn in peace, and remember their daughter how they feel she should be remembered.