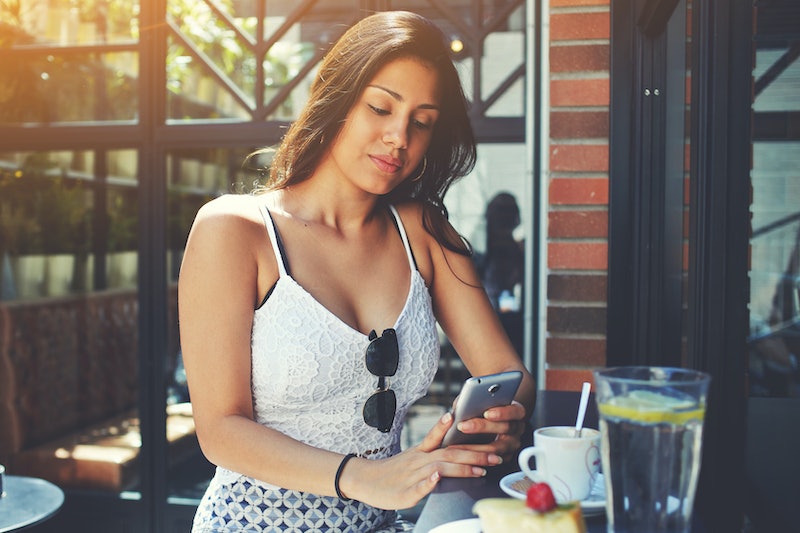 You might've seen people get catfished on the MTV show, but it's also happening off-camera shockingly often. And one of the most common places to find catfishers is on dating apps. But fortunately, a number of apps are figuring out how to prevent catfishing and adding features that force users to be honest about who they are.

The issue they're dealing with, after all, is pretty serious. One report by Glamour found that 10 percent of profiles on some dating apps are fake. And according to a Pew Research survey, 54 percent of online daters say someone they've met online has given them false information. So, it makes sense that catching catfish has been a priority of dating apps lately. Online dating takes up a cumbersome amount of time to begin with, and the process of figuring out whether or not you're talking to who you think you are is too much to deal with on top of that. Sometimes, though, preventing fake profiles is as simple as having users take selfies or upload videos.

"We're releasing photo verification, so we're eliminating that sense that these are not real people or they're not presenting as real as they should be," Alexandra Chong, President of Badoo, tells Bustle.

Here are few apps to check out if you want a catfish-free online dating experience. Hopefully, as more apps follow in their footsteps, catfishers won't have anywhere to turn to.

The latest app to add an anti-catfishing feature is Bumble, the dating app that makes heterosexual women make the first move. Before users can start swiping, they need to upload a photo of themselves in one of 100 poses suggested by the app. Bumble's moderators will vet the selfies to make sure they're the people in the users' profiles.

Badoo, one of the largest dating sites in the world, launched a feature in March that lets users verify their identities. Like Bumble, it shows them a gesture and asks them to upload a photo replicating it so they can't use something already on their phones or computers. While people can use the app without taking these photos, Badoo users can change their settings to only see verified profiles, which means potential catfish won't be seen as often.

Huggle, an app that connects people who visit the same cafes, clubs, and other establishments, recently started letting people take selfies to verify their accounts. The app asks them to assume a specific, unusual pose, with their hands in an L shape under their chins, and its moderators make sure it's actually the same person in the profile photo. Founders Valerie Stark and Stina Sanders were motivated to create Huggle and add this feature after feeling too uncomfortable on social apps themselves. "Catfishing is a serious issue online, and we want to ensure that all our users are safe and engaging with real profiles," Stark tells Bustle.

While the other apps here added a selfie feature some time after their creation, Blume was founded with the goal of stopping catfishing. And instead of moderators, users themselves vet the photos. When you match with somebody, you each have to take a selfie, then each person verifies that their match's selfie looks like the person they claim to be before a message line opens up.

Rather than stopping catfishing with selfies, Coy uses videos. Users have to upload video profiles, which makes it a lot harder to pretend to be somebody else. Once people find someone they want to connect with, they can send them their video as an introduction, and they chat if they both like what they see (and hear).

With all these apps hopping on board the anti-catfish bandwagon, maybe catfishing will soon be a thing of the past. And while there is that rare couple that comes out of catfishing, that's good news for the great majority of us.