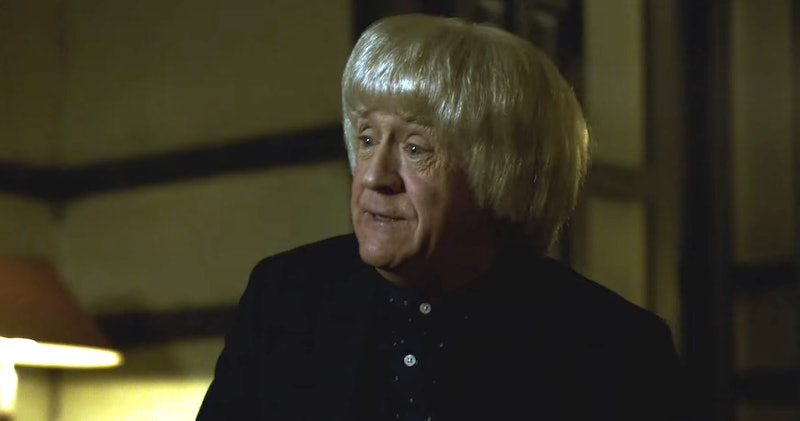 When Leslie Jordan stepped into the American Horror Story: My Roanoke Nightmare house in Chapter 3, his psychic Cricket Marlowe brought the power to speak to the dead. The actor had previously been in AHS: Coven as warlock Quentin Fleming, so are Jordan's American Horror Story characters Cricket and Quentin connected? Or to take it one step further — could they be the same person? While there are some complications to this theory, Jordan's character on Roanoke not only provided some insight into those pesky colonists, but also some AHS Easter eggs that could link Season 6 to Season 3.

Thanks to the psychic on Roanoke saying he hails from New Orleans, Stephen Patterson for Movie Pilot and fans on Reddit started speculating that maybe Cricket has a connection to Coven, which took place in NOLA. This theory is only strengthened by the fact that Jordan has only been in one other season of American Horror Story and of course, it's Season 3. Add on that Cricket has some magical powers and Quentin was a warlock and voila! A conspiracy is born.

Before you start looking for flaws in this hypothesis, I know that the biggest issue with saying that Cricket is Quentin is that Quentin is dead. Back in Season 3, the famous warlock was killed by Frances Conroy's Myrtle. But are AHS fans really going to let a little thing like death stop them from theorizing? I don't think so. Plus, the rules of the living and dead are totally different in Ryan Murphy's universe anyhow.

If you can look past Cricket's Sia-like hair, you can start making connections to Quentin, like how he used the "white light of protection," as Reddit user Molag_Balls pointed out. Or how his actions made him seem more like a witch than a medium, like Redditor jcoleman87 wrote. If Cricket is Quentin, or even if Cricket is just a completely different warlock or a relation to Quentin, then maybe Matt was right and this was all an elaborate hoax for $25,000. That could mean that Cricket was acting like an evil spirit was haunting the home, but really he was putting on a show using his magical powers. As much as I want to trust Cricket since I loved the sass and fun that he brought to Roanoke, him being a charlatan makes a whole lot of sense. And if he's a warlock, he could have also tricked those FBI agents that he allegedly worked with on missing child cases before.

If Cricket is not who he says he is, then perhaps Kathy Bates' Thomasin is part of his game too. While it's a long shot, this could be the big twist that Murphy teased to Entertainment Weekly — that Shelby, Matt, and Lee are all being conned. Not to mention, there's that whole part of Jordan's Cricket being the reenactment actor for the real Cricket Marlowe, so what's real and fake is all sorts of muddled.

For now though, I'm going to succumb to the powers of Cricket Marlowe and see where his communications with the dead lead. But don't be surprised if his skill to speak with the dead is all part of the "perfect illusion" theme that Murphy is playing with this season.