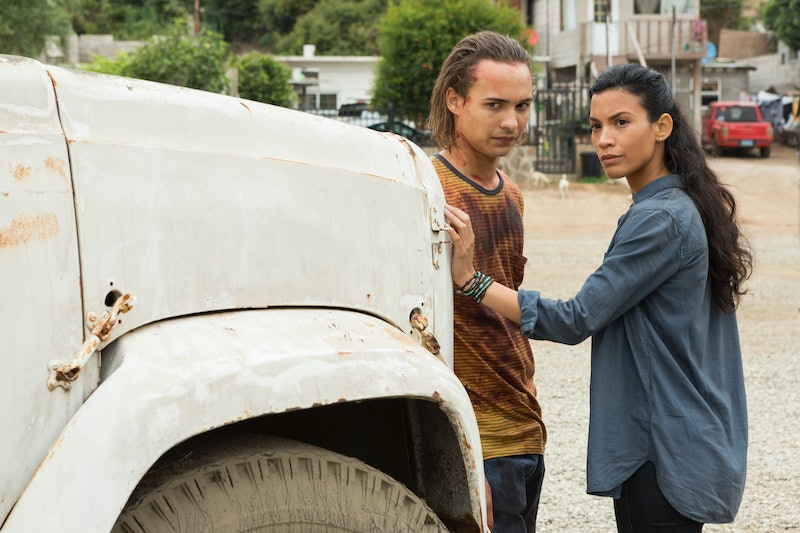 Another season of Fear The Walking Dead has ended, and once again, the group is on the move. Strand and Madison separated, Ofelia is out on her own, we still don't know what happened to the Abigail. and all of La Colonia abandoned their home and began to migrate North. However, as soon as they made it to the border, Nick and Luciana were attacked on Fear The Walking Dead with the rest of their blood-covered people. It was out of the frying pan and into the first.

Near the United States/Mexico border, Nick used his binoculars to spot what looked like a refugee camp. He was finally disillusioned and ready to leave La Colonia, but saw a helicopter and decided to rally those who had taken him in and lead them to safety. I would have thought that Nick, who saw what happened when the military occupied his own suburb, would not have wanted to walk towards that kind of potential army technology. However, they were facing a potential face-off, so with the infected Alejandro willing to sacrifice himself by driving the school bus and releasing the "wall" of infected on their enemies. They walked along the abandoned car-ridden highway, a familiar sight for The Walking Dead fans. Unfortunately, after escaping their former home and reaching the border, shots were fired and armed men surrounded the peaceful members of La Colonia before they took another step.

Will Nick and Luciana survive? Luciana is injured at least. I assume that at least one of them will — because somebody has to meet up with Ofelia, who was likely taken by the same people after she crossed the border earlier in the episode. I just hope that little girl from La Colonia is OK! I hate that Nick's first major act as a post-apocalyptic leader backfired so spectacularly. However, at this point in the apocalypse, many of the characters still feel that the government is going to save the day. I'm glad that they are going back to explore these themes that they touched on in the beginning of the series when The Walking Dead returns for Season 3.