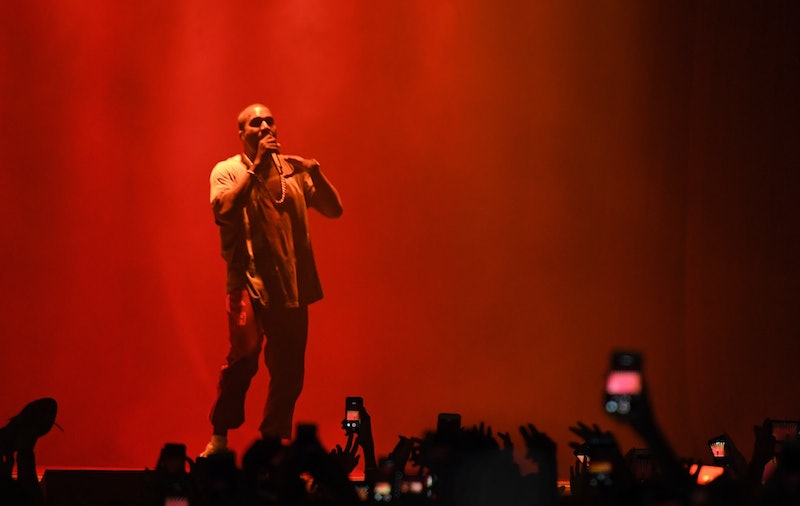 While members of the Kardashian family were sharing their time with fellow celebs and designers at Paris Fashion Week, their week came to a frightening end when Kim Kardashian was robbed at gunpoint in her hotel on Sunday night. The first sign of trouble was when Kanye West abruptly cancelled his concert at the Meadows Music & Arts Festival in New York that same night. While he was performing "Heartless," he was taken to the side of the stage and told of the news, and the video of West canceling his show really highlights how frightening the news was for him, his family, and fans.

While his auto-tune mic was still on, West interrupted his set simply by saying, "I'm sorry. I'm sorry. Family emergency, I have to stop the show," and left the stage immediately. According to People, within 10 minutes, West had already left the venue and was on his way to his family, while Kardashian had taken a private jet out of Paris following the terrifying robbery. For an artist of West's caliber, it had to be surprising for fans to see the show canceled like this, but, if anything, this only further proves his commitment to his wife and children, which is admirable in the face of an emergency like this.

In a fan video shared on the above Genius Twitter account, audible shock is heard from the fans in the crowd after he rushed off stage, and one fan can eerily be heard yelling out, "What happened to Kim?" As West fans, they know that one of the only things that could get him to end a concert this abruptly would be his wife and kids, and they were right.

It wasn't long before details of the "family emergency" came to light, and news spread of Kardashian's robbery in Paris. In a statement to Bustle, Kardashian's spokesperson said,

While reports surfaced of millions of dollars worth of jewelry being stolen, it is a relief that Kardashian and the rest of the family is now safe and being reunited, hoping to put this scary ordeal behind them.