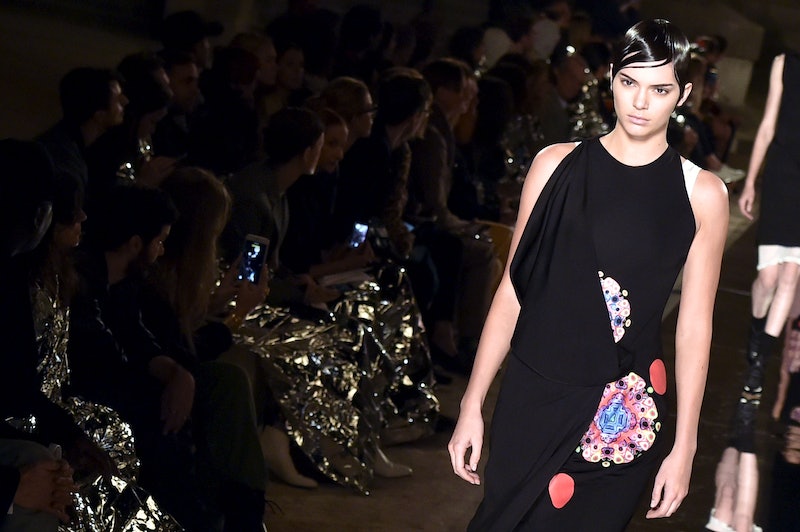 Talk about a terrifying end to what was shaping up to be a terrific week for the Kardashian clan. Early Monday morning, Kim Kardashian West was held at gunpoint in her private Paris apartment and robbed of nearly $10 million in jewelry and other property. Soon after the incident took place, and after giving her statement to authorities, Kardashian West quickly fled the country to be by her husband, Kanye West’s, side. But the reality star wasn't alone during Fashion Week, so is Kendall Jenner still in Paris?

The robbery took place just a few hours after Jenner walked in the Givenchy show at Paris Fashion Week, an event that Kim Kardashian West attended alongside her sister, Kourtney Kardashian, and her mother Kris Jenner. After five men dressed in police uniforms handcuffed the mansion’s private concierge and forced him to open the apartment where Kardashian West was staying, the five men held the reality star at gunpoint before locking her in the bathroom and stealing close to $10 million in property.

Soon after reports started surfacing that her sister had been robbed at gunpoint, Kendal Jenner was on a plane herself. She left the George V hotel and tried her best to avoid the media frenzy at the front, but still, pictures of her leaving the hotel and getting into a private place at the airport surfaced soon after.

Jenner was rumored to be apart of the Chanel fashion show happening on Tuesday, but, with this recent news, that may not be happening. None of the Kardashian or Jenner clan has posted to social media since the attack, but it seems like they are doing what they always do best: putting family first.

Soon after word traveled to Kourtney and Kendall that their sister had been robbed, the pair rushed to her side, according to a report by People. Before the attack happened, Kendall and Kourtney had arrived at a nightclub, but they left soon after when they heard the news. Like the Kardashians and Jenners always seem to do, their family is banding together during this terrible time.