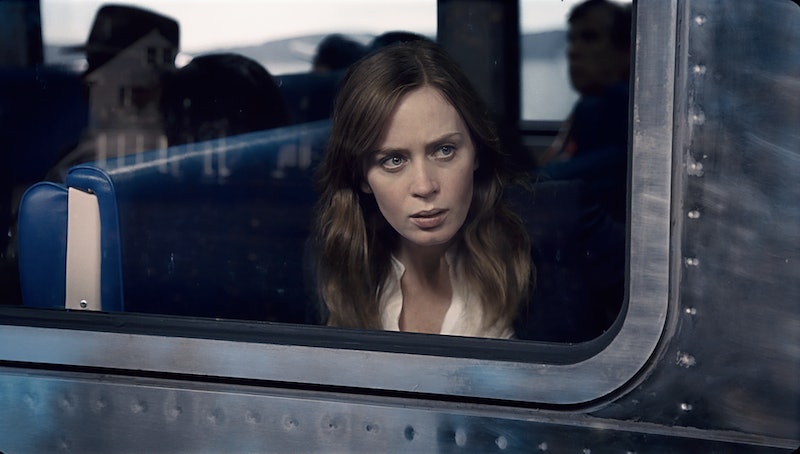 I have a soft spot in my heart for one niche film genre that was very popular when I was teen: the '90s character thriller (i.e. creepy pop-masterpieces like The Hand That Rocks the Cradle or Basic Instinct). When audiences fell over each other to catch the film adaptation of Gillian Flynn's Gone Girl in theaters back in 2014, I hoped it was the first major success in a nail-biter resurgence. The Girl On The Train premieres Oct. 7 and, depending on its box office take and critical opinion, could be proof that these kinds of movies are back in a big way. I can get behind The Girl On The Train and similar thrillers because, though I like to be thrown off-balance by movies, I'm not one for gory horror or non-stop jump scares. I'm hoping that The Girl On The Train is scary, but in a sneaky and permeative way.

If you're a fan of the Gone Girl novel, chances are good that you're read the book this movie is based on as well. If you haven't, well, there are obvious benefits to going in to a mystery film blind. (Don't worry, I won't spoil any major plot points here.) The basis of the plot is that Rachel Watson (Emily Blunt) is a destructive alcoholic who recently divorced her unfaithful husband. As she commutes to work each day, she becomes attached to the idea of Megan and Scott Hipwell, a perfect-looking couple played by Haley Bennett and Luke Evans that she can see from the train window. When Megan goes missing, Rachel's obsession and the memory loss caused by her addiction make her look like a pretty reasonable suspect.

The Girl On The Train isn't a found footage horror movie. It doesn't deal with zombies or any other kinds of monsters. (The inhuman kind, at least.) And it's obviously not being marketed as a horror film. So if you want to predict whether or not you in particular will find it scary, think about the kinds of stories that usually unsettle you. Sometimes, I'm even more unnerved by realistic thrillers than I am by bloody slasher flicks, simply because the events that take place seem far more likely to occur in real life.

According to the MPAA, the official R rating of The Girl On The Train is justified by these factors: violence, sexual content, language, and nudity. There are going to be situations of peril, and Blunt's character is struggling with her mental health. If violence, sexual violence, self-harm, or any of the other themes apparent in the movie's trailer will be triggering to you, you may want to sit this one out. There's fun-scary, and then there's harmful-scary.

Unlike when the French cannibal-themed indie Raw screened at TIFF, no audience faintings have been reported from the theater trenches of The Girl On The Train. (Put your emergency contact on notice before seeing that movie.) So where this thriller is concerned, I'd expect feelings of vague discomfort, maybe a little jump out of your seat, and, and worst, a desire to travel only by bus or plane from now on. Good luck.

More like this
These 25 International Horror Movies On Netflix Prove Fear Is A Universal Language
By Bustle Editors
Read The First Pages Of Emma Rosenblum’s Highly Anticipated Debut, 'Bad Summer People'
By Samantha Leach
What Joyce Carol Oates Knows About Fame
By Erin Somers
15 Easy Pranks To Play This Halloween
By Emily Kelley and Lauren Grant
Get Even More From Bustle — Sign Up For The Newsletter