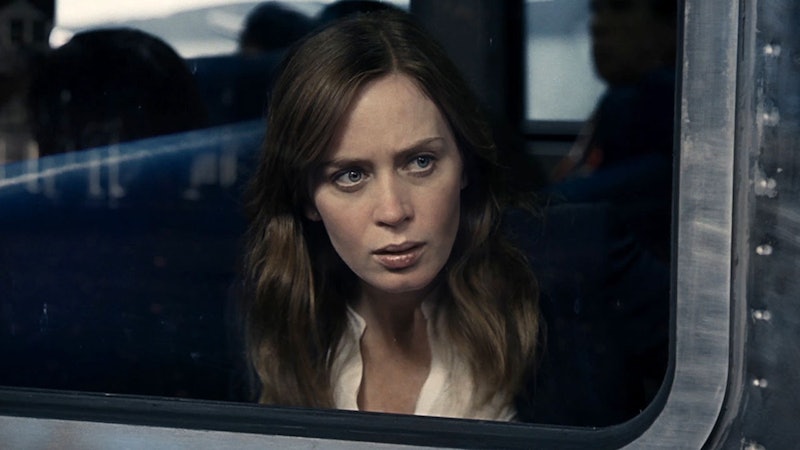 The moment Emily Blunt first appeared in The Devil Wears Prada I knew — like many — that she was going to be a star. I mean, how could you not? Her performance was perfect, nuanced, and utterly hilarious. And it looks like we were right. Blunt is one of the premiere, A-list, in-demand actresses these days and she's also just a really cool person, to boot. Now, Blunt is starring in The Girl on the Train, the new thriller based on the best selling novel of the same name. If you've seen the trailer you already can see how harrowing and intense Blunt's performance is. And if, like many fans, you've read the book, you know there are certain scenes that Blunt will probably knock out of the park. That being said, is it possible that Emily Blunt could win an Oscar for The Girl on the Train?

In my own opinion: yes — at the very least she'll be in the running for a nomination. There are a number of reasons I think this might be her moment, and her year, to snag that golden statue of prominence. For one, a similar book-to-screen adaptation by the name of Gone Girl earned the lead actress, Rosamund Pike, a nomination for Best Lead Actress. Since the tone and commerciality of The Girl on the Train is inarguably similar to Gone Girl, it's safe to say that those factors won't detract from a potential nomination.

Then there's the subject matter itself. The Girl on the Train is a psychological thriller that centers on Rachel, an alcoholic who rides the train to and from NYC each day and from that train she continuously watches one house with one "seemingly perfect" couple. They become her obsession, her fascination and eventually, Rachel finds herself discovering who they really are and finds herself in the middle of a mystery after the woman from the house goes missing. It turns out that Rachel was in the area the night the woman went missing because her ex-husband, Tom, and his new wife live next door to the couple. Could it get any worse? Well, yeah, because Rachel has no recollection of the night the woman went missing and she begins to be looked at as a suspect. The book offers plenty of juicy material for Blunt to sink her teeth into. And it's possible that her performance as Rachel will catapult her toward Oscar glory.

Unfortunately, The Girl on the Train hasn't been getting the best reviews. The Guardian's review claims the film doesn't quite hit the notes that Gone Girl hit so well. However, Variety's review notes that Blunt still brings her all to the role, and The Economist seems to echo that sentiment. Overall, Blunt seems to be the bright spot for the film.

Still, it's a tad early to say if any actor is a shoo-in for an Oscar nomination, but Blunt constantly dazzles and I would not be shocked to see her in the running. The Girl on the Train certainly has enough chatter around it to get buzz around her name, but whether or not that chatter will manifest itself remains to be seen. And honestly, even if she doesn't get a nomination, there's no doubt in my mind Blunt will one day win an Oscar. Yeah, she's that good.

More like this
These 25 International Horror Movies On Netflix Prove Fear Is A Universal Language
By Bustle Editors
Read The First Pages Of Emma Rosenblum’s Highly Anticipated Debut, 'Bad Summer People'
By Samantha Leach
Ruth Wilson’s New Thriller Spotlights A Controversial Irish Institution
By Darshita Goyal
Nazanin Boniadi Was A Healer Long Before 'The Rings Of Power'
By Olivia-Anne Cleary
Get Even More From Bustle — Sign Up For The Newsletter