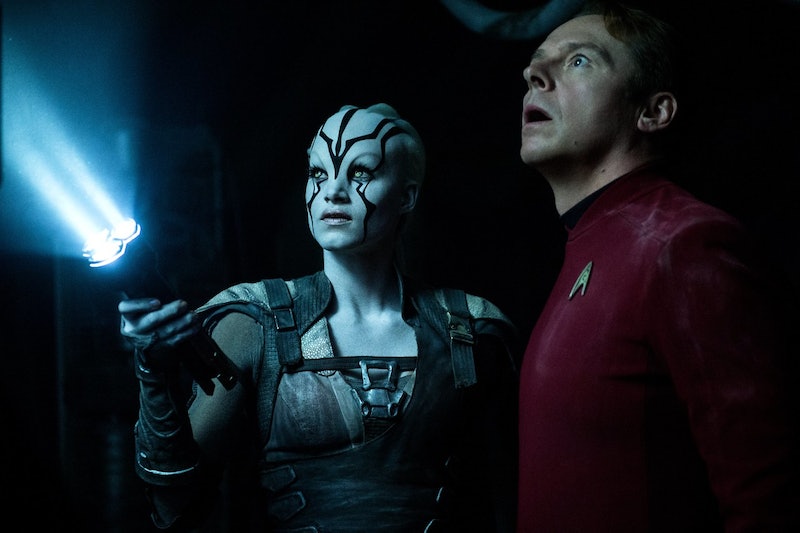 Star Trek Beyond was released in July of 2016, giving birth to the most badass female heroine of the summer. Jaylah (Sofia Boutella), a new character created by the filmmakers, made her butt-kicking debut in the third film, and quickly became a fan favorite. An alien of unknown origin, Jaylah joins forces with the crew of the U.S.S. Enterprise after they become stranded on Altamid, a planet overrun by the evil Krall and his goons. She was a remarkable addition to the ensemble, helping give the Star Trek franchise a much-needed boost. And in this exclusive clip from Star Trek Beyond 's special features, co-writer Doug Jung, director Justin Lin, and more dish on why Jaylah joined the Enterprise crew in Star Trek Beyond .

In the behind-the-scenes clip — part of the special features that will be available on Blu-ray and iTunes Extras on Nov. 1 — producer Lindsey Weber revealed that, when discussing adding in a new character in Star Trek Beyond , filmmakers agreed it should be a new alien, and a woman, but more importantly, that she should be a well-rounded character. "We wanted her to be smart, complicated, and have a lot of agency," Weber said in the featurette.

Jaylah is, indeed, a smart, complicated character, as shown through her relationship with Scotty, the first member of the crew she meets in the film. As a fellow engineer, Jaylah is not only Scotty's equal, but, thanks to their introduction — a.k.a. that time she saved him from three of Krall's followers — she is his protector. Jaylah might not be as much of a genius as Scotty, and she might not have a whole crew fighting to back her up, but she's the one in a position of power when they meet, not the other way around. And, while her power shifts over the course of the film, she never loses her confidence and is never reduced to being less-than.

Aside from providing the franchise with a new female character, Jaylah's character was also crafted as a new way for viewers to see the United Federation of Planets and Starfleet. By seeing the camaraderie and loyalty displayed by the Enterprise crew, Jaylah reminds us that the Federation is, at its core, an organization of hope. "You really believe because of her innocence that she would understand [Starfleet] and she would say, 'Yes, I want to be a part of that,'" Jung adds in the clip.

But even with all the work behind her character's introduction, Jaylah's future in the Star Trek franchise is unknown. A fourth Star Trek movie has been announced, but so far no casting announcements have been made with regards to Boutella. Here's hoping that changes soon.

Star Trek Beyond is available on Digital HD on Oct. 4, with special features and Blu-ray and iTunes out on Nov. 1.

More like this
Twitter Is Unravelling Over Wolverine’s Return For 'Deadpool 3'
By Darshita Goyal
The 50 Most Powerful Characters In The Marvel Universe, Ranked
By Johnny Brayson and Nola Pfau
Lin-Manuel Miranda & Tituss Burgess React To 'Little Mermaid' Casting Backlash
By Radhika Menon
Lego Just Announced Its 'Black Panther' Set Release Date
By Maxine Harrison
Get Even More From Bustle — Sign Up For The Newsletter