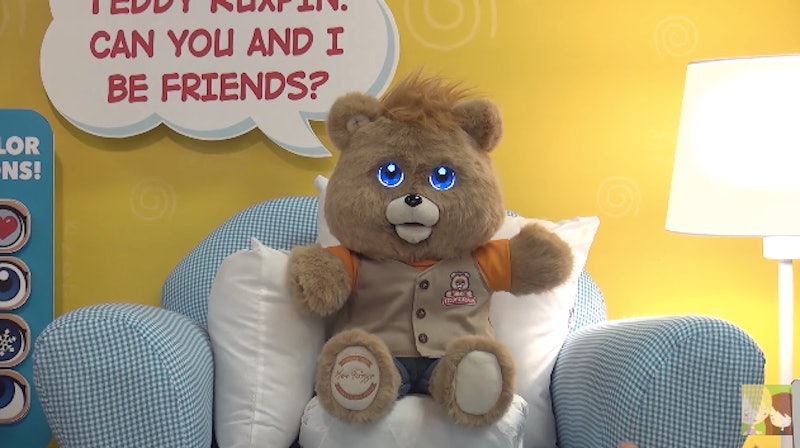 Here's some exciting news for all you toy collectors and '80s and '90s kids: Teddy Ruxpin is coming back, and he's more sophisticated than ever. The talking teddy bear that was once everyone's favorite bedtime buddy is returning as a 14-inch-tall bear that still tells stories — but with a few new features. Most notably, the bear will come with colorful LCD eyes, 10 different stories and touch sensors on its hands and feet. The newly improved Teddy Ruxpin also comes with a price hike, though — cutting edge tech isn't cheap — and will now cost $99. We've got a while to go before he debuts in August 2017, but that doesn't mean we can't indulge in our nostalgia and get excited for the new Mr. Ruxpin.

For those of you who might need a refresher, Teddy Ruxpin was a charming teddy bear that was all the rage in the mid-1980s and 1990s. Part of the reason was that he was one of the very first animatronic toys to hit the market. His big, brown eyes blinked. His snout moved up and down as he said, sweetly, "Hi, my name is Teddy Ruxpin. Can you and I be friends?" He also came with his own storybook and was almost just as good a storyteller as Mom and Dad, using a cassette player hidden in his back to sing and read to us.

It's been more than three decades since Teddy Ruxpin first came out, which means he's older than a lot of us Millennials. Back in the day, this is what he looked like.

In many ways, the new bear that's coming out stays true to the original Teddy Ruxpin. He still talks, moves, and reads stories. He still wears a light brown shirt, although his new outfit is a button-down shirt over an orange tee, rather than a red one. Not only can he blink and look in different directions, but Teddy also now has blue LCD eyes (not too dissimilar from the ones that grace the current model of Furby) that react to his own stories with 40 different animated stars, red hearts, and snowflakes — kind of like emoji in his eyes. It's safe to say that the new Teddy Ruxpin's personality is even more ~colorful~ than the last.

Instead of a cassette player, Teddy Ruxpin's stories are saved on a 4G internal hard drive; you can also download more via smartphone if 10 isn't enough. He's also more patient than before, as you can now press his hands and feet to start or pause his storytelling and even change to a new story if you get bored with the current one. And, of course, a 21st century toy wouldn't be complete without a mobile app filled with Teddy Ruxpin's stories and illustrations to replace that old storybook. That means you can still read along with Teddy as he tells his stories out loud.

Naturally, I'm super excited that today's tots are going to have the chance to cuddle with their very own Teddy Ruxpin 2.0. And...I mean, adults can totally play with teddy bears, too, right? (Right?) August 2017 can't come soon enough.