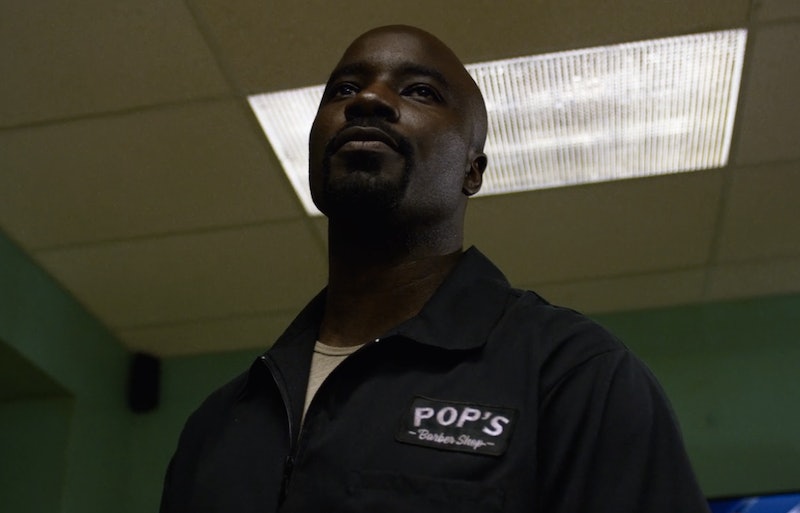 Spoilers for Luke Cage ahead. In the grand tradition of fictional mentors, Luke Cage's true calling as Harlem's greatest hero is launched by the sudden and tragic death of Pop. Far from being just a mentor and father figure to Luke, Pop also mentors and fathers basically every young man that walks into his barbershop — even going so far as to keep a Swear Jar that even he pays money to when he uses profanity in the building. However, one of the many things that Pop is best known for is the motto which Luke Cage takes to heart: "Never backward, always forward. Always." By the end of the series, Luke has even customized it to be more fitting to the knowledge and experience he has gained: "Sometimes backward to move forward. Always." That simple quote is, above all else, the most powerful message to take from Luke Cage. It perfectly embodies what it means to be black in today's society.

Pop was an inspiration to heroes and villains alike. When Luke wanted to waste his powers by keeping his head down and nose out of other people's business, it was Pop who reminded him, and blackmailed him into acknowledging, that his abilities made him able to do things that no one else could do and with great power comes great responsibility. Even Cottonmouth, whose desire to build a bright future for Harlem usually means murdering a few people, was gutted when Pop was murdered by one of his henchmen.

As an immigrant, Pop resonated in particular with me. There are days when I can't imagine what I would do if I was stuck where I came from. I was born in Kingston, Jamaica, and raised between Mandeville and Old Harbour before being shuffled to America, the land of opportunity. My parents speak fondly of my first day in New York, when I attempted to stop the city bus by screaming, "One stop, driver!" as opposed to pulling the cord like the other passengers. I remember being made fun of by my classmates when, instead of saying hello, I greeted them with, "Wagwan?"

There was a far too lengthy period in my life — beginning with the loss of my accent and ending with reclaiming my blackness — when the reminder that I was born in Jamaica was a source of shame. I was finally an American citizen, no longer a Resident Alien being asked when her UFO would return to take her back. I was determined that my past would not define the person that I could be in the United States, even if my parents insisted on dragging me back to that island every other summer. Even if I spent those summers being mocked anew by my cousins, who noted that I sounded "white" and "foreign" now.

The motto of "never backward, always forward, always" encourages us to shut the door on our past and focus on our futures. It asks us to let go of that which we cannot control and focus on bettering ourselves, our circumstances, and our communities a little bit every day. But that's too literal an interpretation, because Luke is right. Sometimes you do have to go backward in order to move forward. It's just that we must always, always endeavor to move forward.

Luke Cage is not just an examination of what it means to be black in America today; it's an examination of our culture, our history. It examines the heroes of the past, the heroes of the present, and the heroes of the future. The show makes it very clear that bettering ourselves means reclaiming our culture and coming to terms with our past, not forgetting it. From Luke delivering a sermon on the legacy of Crispus Attucks while being held up at gunpoint to once-an-episode reminders of how and why and when Harlem was a hub of black excellence and culture, Luke Cage doesn't want to risk the chance that we as black viewers don't know our history. And that's so important.

The moment we disavow our past as a component of what makes us who we are is the moment that we lose something truly valuable. Without my grandmother to rock me to sleep on the porch and keep me fed while my mother was in America earning enough money to bring our family over, I would not be here today. Without my father making me walk the length of Royal Flat with a doll in my arms — pretending he couldn't hear me every time I begged to be picked up unless I was truly exhausted — I wouldn't have learned not to take the easy way out. Without my mother to risk the chance that I wouldn't recognize her as I grew up so she could go, alone, to an unfamiliar country and work herself to the bone to earn money to build a better life for us, I wouldn't have that better life now. How could I have ever been ashamed of any of that?

Pop is right in that we should never move backward in our development and always move forward, but Luke Cage is right on a deeper level when he reminds us that sometimes you must — by choice or by error — move backward. Just never let that stop you from moving forward.