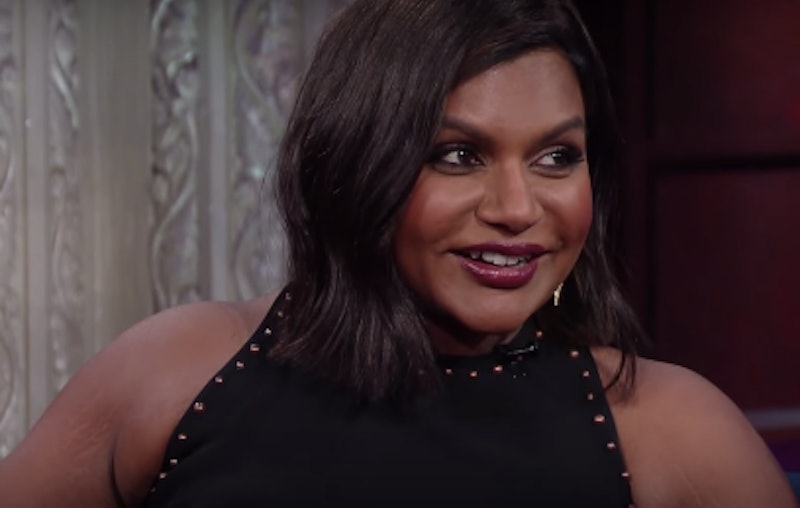 Mindy Kaling is always hilarious, and her particular brand of humor, which often revolves around biting self-deprecation, was very evident during her appearance on The Late Show With Stephen Colbert on Monday. As an incredibly busy and successful comedian, Kaling appeared on the talk show to discuss the new season of her show The Mindy Project, her book tour for the paperback version of Why Not Me?, and, perhaps most importantly, her role in the upcoming movie Ocean's 8 . The star-studded, all-female Ocean's Eleven remake sounds all kinds of awesome, even though details about the script are being kept tightly under wraps. So who will Mindy Kaling play in Ocean's Eight ? She's got a solid idea.

Based on her interview with Stephen Colbert, it sounds as though even Kaling doesn't know exactly who she's playing in the rebooted franchise. It's clear that she's in awe of her fellow cast members in Ocean's 8 , including Cate Blanchett and Sandra Bullock, but that the exact details of the script are a secret even to her. But the funniest part of her interview, by far, was the description she gave of who she thinks she'll be playing in the film. Kaling seems sure that she's been brought in as the comic relief.

Colbert mentioned that every character in an Ocean's movie has a special skill, inquiring what Kaling's might be, and this is when things got hilarious. Referencing the caliber of her cast mates, The Mindy Project's star said, “I’m real scared, man, because when I look at that list of people... I know that my skill is going to be I get attacked by the guard dog so they can break into the casino.” She might joke that she'll be a comedic distraction from the real action, but it seems likely that Ocean's 8 will be a total ensemble, just like all of the other Ocean's movies. Plus, Kaling's comic timing, and her handle on physical comedy, are going to be important assets in Ocean's 8.

While I've no doubt that the strength of her wit played a big part in her being cast in the movie, I know that she will kill it in Ocean's 8. It's great that she's finally being taken seriously as an actress and being cast opposite Hollywood royalty like Blanchett and Bullock. Even if her guess is right, and she will in fact be the decoy while the rest of the gang carry out an impressive heist, I'm certain that she'll ward off those guard dogs in the most hilarious and heartfelt way possible.

According to Kaling, filming of Ocean's 8 starts in two weeks in New York, so hopefully we won't have to wait too much longer to find out more details.