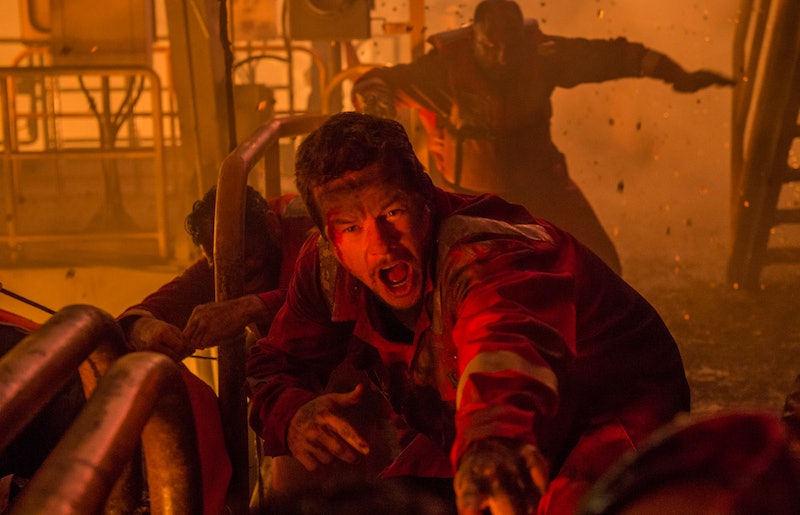 Deepwater Horizon, Mark Wahlberg's newest true story action movie collaboration with director Peter Berg, recreates the Deepwater Horizon disaster with excruciating, if not entirely accurate, detail. To recreate the 2010 event with as much detail as possible, Berg chose to build a replica of the oil rig, a huge undertaking. (Berg claimed that the rig built for the film was "a sizable 85 percent to scale recreation" in an interview with NPR.) But despite its grand scale and massive Hollywood budget, Deepwater Horizon is nothing compared to the real thing. Need proof? Check out the below photos of the real Deepwater Horizon disaster and see for yourself.

As Mike Williams, the Chief Electronics Technician on the offshore drilling rig, Wahlberg takes the audience through the hours leading up to the technical malfunction and what happened during the explosion. Williams, who acted as a consultant on the film, was one of the last survivors off the rig, meaning that the entire chaos of the April 20, 2010, explosion is captured in the film. It's impressive and terrifying, but, while a film is over in two hours, the world is still reeling from the consequences of Deepwater Horizon. Whether it's the families who lost loved ones, the businesses put in jeopardy by poisoned wildlife, or the environment, the real Deepwater Horizon disaster is still affecting many people.

The rig was planted 42 miles from land, and yet, once the well blew out, letting gas into the rig and causing a giant explosion, the flames could be seen from shore.

Investigations found that one of the key things that lead to the Deepwater Horizon explosion was a malfunction with the blowout preventer and the cap, pictured above.

Deepwater Horizon was ablaze for two whole days as oil continued to gush from the depths of the well, until it finally sunk on April 22. But after Deepwater Horizon sunk, fires continued as oil invaded the sea waters, though these were preventative fires.

In an attempt to reduce oil slicks and lessen oil damage to the ecosystem, responders conducted controlled burns of the oil. These fires burned over a period of nine weeks, creating large, ominous black carbon clouds of pollution.

Meanwhile, local wildlife got caught in the crosshairs. Dramatic photos of birds and other marine life drenched in oil became emblematic of the Deepwater Horizon oil spill, and some animals are still suffering from the lasting effects of the spill.

It took less than a month for oil to start reaching the shore. In the 87 days between the disaster and the capping of the Macondo well on July 15, 2010, the EPA estimated that 4 million barrels of oil were released into the ocean.

Deepwater Horizon sparked protests across the country, including on the Florida shores of Penascola Beach, where about 500 people took part in the "Hands Across the Sand" protest against offshore drilling.

These photos of the real Deepwater Horizon explosion might show what really happened, but they lack the firsthand experience of what happened on the rig that night. Deepwater Horizon helps create those images, for better or for worse.