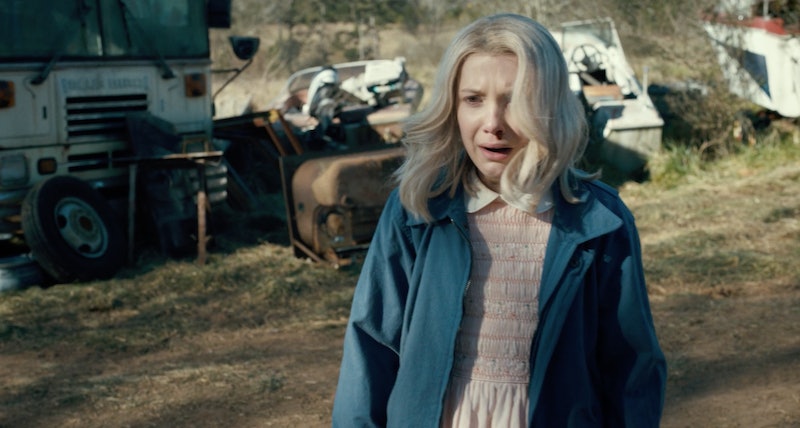 We have months until the sophomore season of Netflix's sleeper hit Stranger Things premieres, but, during the dry spell, a gift has surfaced online. A gift in the form of a fan theory that proposes Eleven from Stranger Things grew up to be Elle Woods from Legally Blonde. I know right? Australian writer, Kaitlyn Plyley, published a piece of fan fiction on her blog that explored the idea, and, yeah, it's a radical one, but more radical than a Demogorgon? Or an Upside Down world? Or Eggos for breakfast, lunch, and dinner? Kidding. That last one's not radical at all.

In the fanfic, Eleven tries to keep her telekinetic powers a secret from everyone by hiding them with pink clothing, blonde hair, and a sorority girl affect. Plyley writes, "Elle surrounded herself with soft, pink things — fluffy pillows, sweet fragrances — and avoided anything that would make her seem intimidating. It took her a long time to work out that she was still trying to prove she wasn’t the monster." Chills.

As you are lifted from the fog of that revolutionary idea, consider this: Eleven and Elle Woods have many a thing in common, and, once you watch it back knowing what you know about the possibility that El is Elle, everything becomes crystal. Here are all the early signs that El from Stranger Things grows up to be Elle Woods. What, like it's hard?

Eleven's character arc in Stranger Things can be traced by three of her quotes. "What is Friend," "Friends tell the truth," and "Friends don't lie." (Which, OK, the last two are synonymous, but you get it.) Eleven begins to understand the importance of friendship during these defining moments of her youth. All of that fundamental work can be seen in Elle Woods, a woman who would do anything for her friends. Like rescue a dog from an ex husband, just to name an example.

2. They Are Different Than Everyone Else

Since people were often reducing Eleven down to an evil force, she became closed off. Elle Woods would face a similar struggle at Harvard, where she too was the odd one out. Eventually, Eleven and Elle would learn that their differences only make them stronger.

3. They Say A Lot Without Having To Say A Lot

Eleven barely speaks in Stranger Things. While Elle is much more vocal, she doesn't have to deliver long soliloquies to get her point across. "I object!" will do just fine. She most likely learned this at a young age.

4. They See The Good In People

Eleven saw the good in Mike, Dustin, and Lucas and was able to trust them. Eventually, as Elle, she could see it in her client Brooke Wyndham. When nobody believed Brooke, Elle did.

5. They Seek Comfort In Food

At first it was Eggos, then, once Eleven's tastes matured, it turned into chocolate.

6. They Have Powerful Minds

And surprising ones too. None of the boys expected Eleven to be so powerful. Guess who else has been constantly underestimated for her brain's capabilities? Elle Woods, yo.

7. They Have Strong Morals

Both Eleven and Elle Woods understand the importance of ethics. For Eleven, that came in the the form of fighting the bad guys with her powers. For Elle, the bad guys were less direct, but they were still there. They were the ones that thought she couldn't do it, and, like Eleven, Elle proved them all wrong. Sure, with a different set of powers, but a set of powers no less.

I'm not saying the Duffer brothers should consider the possibility of the Eleven and Elle theory and work it into the script. I'm just saying that yes, yes, they should. I rest my case, Elle Woods style.