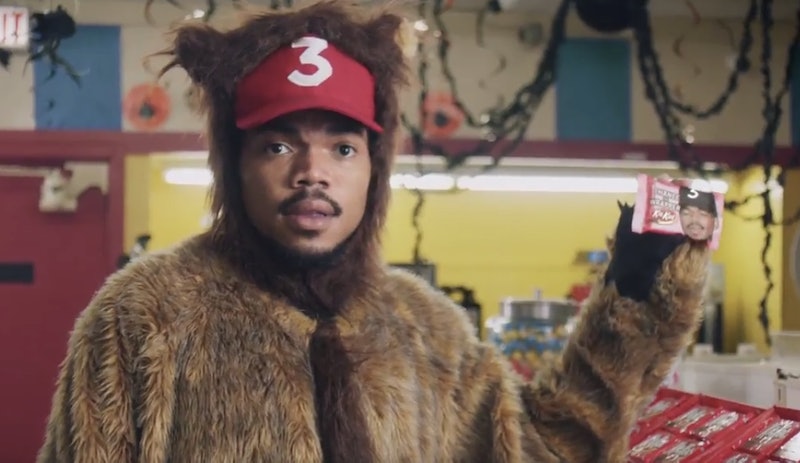 We may need to start referring to Chance the Rapper as Chance the Wrapper. No, I'm not the one who came up with that pun. To celebrate the Halloween season — or, hey, just for fun — the rapper is getting into the candy game. Chance the Rapper is featured in the latest Kit Kat jingle, and the new commercial from the Hershey company adds a bit of a flare to the classic candy jingle. And by flare, I mean it now also include the "No Problem" rapper singing the jingle itself and appearing the commercial. When a costume-covered Chance the Rapper comes across the singing chocolate-wafer candy in the commercial, even he can't deny "that's a good song."

However, fans who have heard some of Chance the Rapper's other popular song covers, his latest endeavor really comes as no surprise. Even with the new advertisement still sticking to the general theme of the classic jingle, Chance the Rapper was able to play with his sound and the sound Kit Kat fans know and love with a revamped version. As far as the commercial itself goes, I'm really hoping they start selling Kit Kat bars with his face on them. This commercial already makes going trick-or-treating seem even more worthwhile for the chance to get one.

Weird? Yes. Amazing? Also yes. Naturally, it seems as if fans of both the rapper and the candy bar can't get enough it. I'm pretty sure Kit Kat just won Halloween with this one.

It's Just Too Funny

Fans Are Just So Thankful

Seriously, Chance The Rapper Gets All The Respect

But Only If Chance The Rapper Is Involved

Nevermind... Just Give Us Kit Kats

Excuse me while I go eat all of the Kit Kats while humming this new version of the jingle.