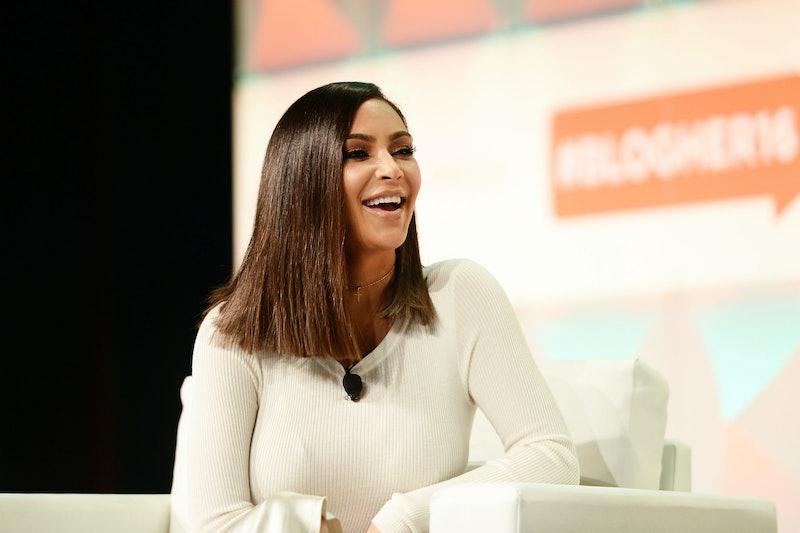 After it was reported that Kim Kardashian was robbed at gunpoint in Paris, it seemed like everyone had an opinion on the matter. This included Chanel designer Karl Lagerfeld, who gave his take on Kardashian's robbery at Paris Fashion Week shortly after he shared the message "Dearest Kim, we are all with you." The designer explained to reporters that "you cannot display your wealth and then be surprised that some people want to share it with you.” He then continued by questioning why Kardashian was in a hotel with no security. "If you are that famous and you put all your jewelry on [social media]," he said, "you go to hotels where nobody can come near the room.” Sadly, he isn't the only person who insinuated this robbery was somehow Kardashian's fault. They don't see the reality star as the victim of a crime, but as part of the problem. And that attitude is itself a problem.

Think Progress came up with a guide to all the ways Kardashian was being blamed for the robbery by the media, which included The New York Times detailing the lavish alcohol-filled party she attended, despite the fact that Kardashian doesn't drink. The Hollywood Reporter featured quotes from people at fashion week who were skeptical about the whole thing. Twitter had a field day coming up with 140 characters' worth of insults to express why they didn't feel any sympathy for Kardashian. While it's not clear yet who committed this robbery, what is crystal clear is that this case is revealing the worst sides of many people with access to Twitter.

Some of this has to do with Kardashian's celebrity status, and the world just not feeling too bad over the fact that she was robbed of expensive jewelry. This is clearly not taking into account that Kardashian reportedly worried she would be raped or killed by these men, who had broken into her room in the early hours of the morning — although many aren't particularly sympathetic over that, either. But this blame game seems particularly aimed at Kardashian moreso than it would be toward any other celebrity.

Other celebrities have been robbed of very expensive things. When Lupita Nyong'o's pearl-encrusted 2015 Oscars dress worth $150,000 was stolen from her Hollywood hotel, it was treated exactly like what it was: a crime. When the Bling Ring was robbing celebrity homes like those of Paris Hilton, Lindsay Lohan, and Rachel Bilson, it was reported as being an invasion of privacy and despicable. Somehow, though, Kardashian isn't getting that same courtesy. Instead, she has to defend her social media actions and ignore the conspiracy theories from those who believe this whole robbery was a stunt for her reality show. It's almost as if Kardashian's so famous that people have forgotten she's human.

Even worse, far too many people seem to have lost their compassion for a woman who was the victim of a horrifying robbery. No matter someone's status, it shouldn't need to be said that no person should be treated that way and that they don't bring their own misfortune upon themselves by daring to do something as universally common as using social media. Somehow people have been unable to look beyond their feelings about Kardashian, a polarizing figure, and only see her as someone who deserves what she gets. Especially if it's something bad.

But worse, with this case, the world is letting it be known once again that it's not safe to be female in the public sphere — especially in 2016. Just recently, Leslie Jones was the victim of racist and sexist harassment on Twitter, while Gigi Hadid was attacked on the street in Paris by infamous "prankster" Vitalii Sediuk, who rightfully received an elbow to the face for messing with the model. Sediuk also tried to accost Kardashian while she was in Paris, looking to kiss her bottom in what he claims was a protest of her "using fake butt implants." The harassment in too many of these cases wasn't seen as something horrifying, but as a joke, a stunt, or worse, the woman's fault for just, you know, being a woman.

Kardashian, and any person who is the victim of a crime, is worthy of empathy. It's sad that a lot of people seem to have forgotten that. While there are a lot of questions surrounding this case, none of them should be whether Kardashian deserved it or brought it on herself. No woman — no human being — deserves to be robbed.