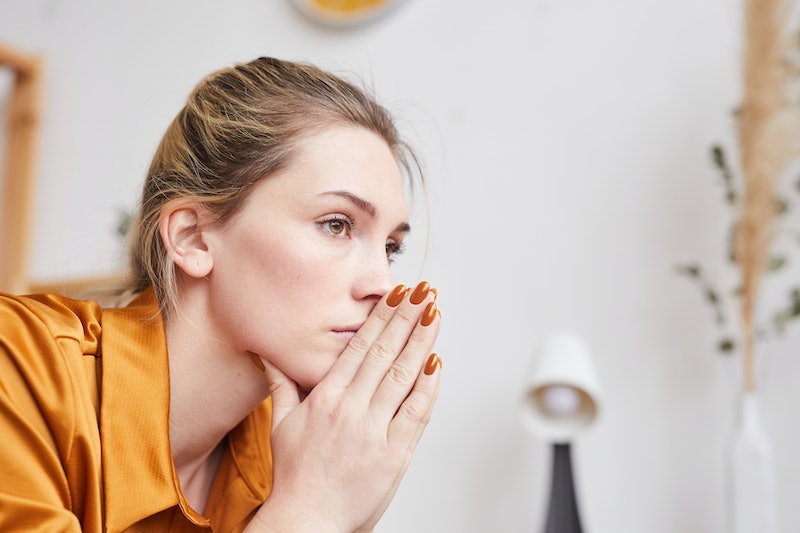 Some people may consider it offensive to use harsh language when discussing issues like domestic violence. But what's really offensive is that it happens in the first place. Break The Silence Against Domestic Violence's "Survivors Drop 'F-Bombs' On Domestic Violence" video makes this point by discussing intimate partner violence with the use of many, many F-bombs. If there's any issue that warrants this language, after all, it's this one.

"The motivation behind this campaign really stems from being completely offended by domestic violence," Break The Silence Against Domestic Violence's Founder and Executive Director, Kristen Parugenog, tells Bustle over email. "There is nothing more offensive than women and men losing their life because of domestic violence. There is nothing more devastating than the fact that every 90 seconds, a woman is impacted by abuse. We want society to wake up and realize this needs to stop!"

As the video points out, what's really offensive is when people don't talk about issues like domestic violence, given how prevalent and damaging it is. Everyone in the video, including the children, has been personally affected by domestic violence, Parugenog says.

Here are a few disturbing facts from the video that absolutely merit the F word.

"What the f*ck? One in four?" one woman says in response to this fact. Indeed: Multiple studies have shown that at least a quarter of women are victims of domestic violence during their lifetimes. The National Intimate Partner and Sexual Violence Survey found that over one in four American women over 18, as well as one in seven men, have experienced domestic violence already; Australia’s National Research Organization for Women’s Safety found that one in four women in Australia have; and the Crime Survey of England and Wales found that one in four women in England and Wales will be victims during their lifetimes.

The fact cited in the video is that a woman experiences domestic violence every 90 seconds, though the statistics out there are mixed. According to Domestic Violence Statistics, a woman is assaulted or beaten every nine seconds in the United States. According to Feminist.com, a woman is sexually assaulted every 90 seconds. Whatever the exact numbers, they are way, way too high. "F*ck DV for making us feel like it's normal," one survivor says. Given how common it is, it can start to seem normal. But it never should.

"No kid should have to grow up with abuse," one child survivor in the video says. "Mommies and daddies, we're watching you," another says. Intimate partner violence really does affect the children of the abuser. In addition to the psychological damage that comes from being raised by parents in an abusive relationship, many of these kids are abused themselves, according to a study in the Journal of Family Psychology. Every year, three to four million children may be exposed to domestic violence, according to the Domestic Violence Roundtable.

It's high time we broke the silence.