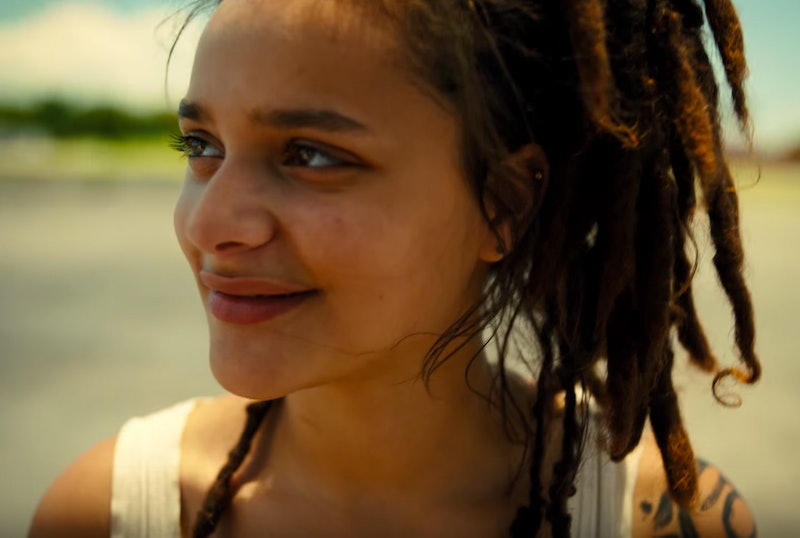 American Honey is creeping its way across movie theaters, slowly but surely working its way through. The independent film, which won a Jury Prize at the 2016 Cannes Film Festival, is currently enjoying a limited release, but it already has people talking. A road trip film starring Shia LaBoeuf, Riley Keough, and Sasha Lane, American Honey is earning a lot of buzz as a rare movie about teenagers and 20somethings that isn't just about how millennials rely too much on their phones. The film, from director Andrea Arnold, is anything but the Hollywood norm. In fact, Arnold hired mostly non-actors in the film — Lane, who plays the protagonist Star, is making her acting debut. And the film has a very realistic feel, probably because Arnold opted to shoot on the road. Yes, American Honey was actually filmed on a road trip, a vibe perfectly captured in this new, exclusive American Honey poster.

Before filming began on American Honey, Arnold took a road trip across the United States, observing American culture and scouting young potential actors for her film, as Rolling Stone reports. Though LaBeouf and Keough are established young stars in Hollywood, nearly every other main cast member is a first time actor, discovered by Arnold and her casting team. Authenticity was paramount to the making of American Honey, which is why Arnold not only cast non-actors, but she actually took her cast on a road trip, just like the one in the film. It's this road trip reality that is captured in this exclusive poster for American Honey. Designed by Simon Prades, this MONDO poster perfectly represents the carefree, old-school nature of a road trip, while also depicting the romanticism of any film experience.

Arnold's thirst for a real road trip extended from the casting process to the very end of production. Two weeks before filming began, Arnold's lead actor dropped out, sending her on a trip Panama City Beach in Florida to scout for a star — what Arnold called "street casting" in an interview with NPR's "Fresh Air." "We get some of those deckchairs and sit outside Wal-Mart. And like watch all the kids go by," Arnold told "Fresh Air." Lane was discovered on a beach while on spring break, and many other non-actors in the film auditioned in the Panama City Beach Wal-Mart parking lot.

Filming was similarly loose. Arnold gathered her cast of about a dozen young actors and took them on a 12,000 mile road trip across the US, which served as the shoot. The reality of the experience was important for Arnold, who told the Verge that she insisted the crew and the cast travel together. "There wasn't this usual thing where you might do a couple of weeks filming in one place, and then fly to the next," she said, "I wanted us all to have a real experience." During the long drives in the van, Arnold would film the cast — sometimes performing scripted scenes, sometimes improvising, creating a very authentic road trip feel.

A road trip movie actually filmed on the road, American Honey is a uniquely true film, and should definitely be on your watchlist this fall.