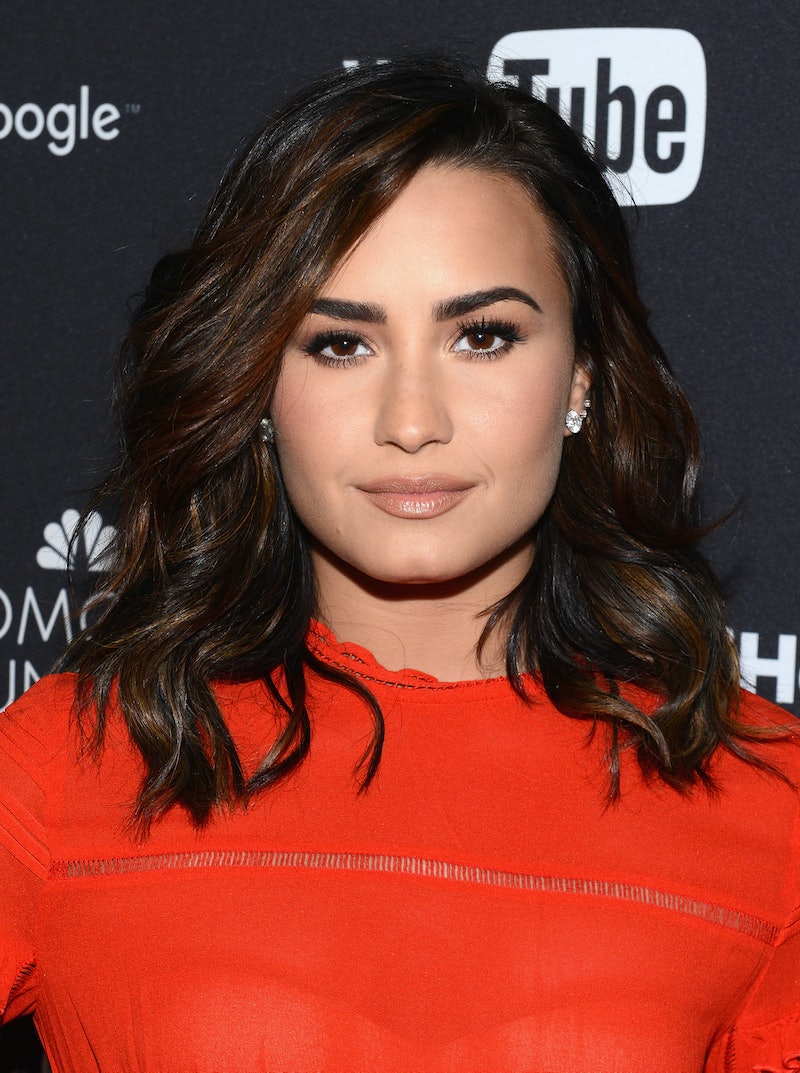 Another celebrity is taking a much-needed hiatus from the entertainment industry. Demi Lovato is taking a break in 2017, she announced on Twitter Tuesday. "So excited for 2017," she wrote. "Taking a break from music and the spotlight. I am not meant for this business and the media." As someone who is both a prominent singer and actor, it's hard to understand or imagine not having Lovato around creating new music or projects. And as much as it seems like her "break" is coming out of nowhere, it's actually not.

Despite not giving a clear-cut reason for her announcement, she did elaborate a bit by tweeting a fan about whether she'll come back, "Dunno. It doesn't feel worth it anymore. I'd rather do charity work tbh." Apparently, the 24-year-old is over it all and would rather give back to others.

All of this comes at a time when Lovato is getting scrutinized for remarks she made about Taylor Swift, her "squad," and their bodies. In an October interview with Glamour, which came out on Tuesday, like usual Lovato didn't hold back in her opinions and said, "To be honest, and this will probably get me in trouble, I don’t see anybody in any sort of squad that has a normal body. It’s kind of this false image of what people should look like. And what they should be like, and it’s not real."

It was a surprising comment for Lovato to make, especially since she's been extremely vocal about body confidence. I mean, at the end of September, she called out some fan art for altering her body. Even though she's facing critics right now, the "Body Say" artist isn't apologizing for her thoughts. After the Glamour interview hit the internet, Lovato tweeted, "I get asked questions. I answer them. Sue me. Also don't forget that words can be taken out of context when doing interviews.. still not apologizing for saying what everyone want to say." She continued, "I don't understand why people care so much about what I say in interviews? Do y'all watch the news? Don't y'all got sh*t to worry about?" (Bustle reached out to Glamour about the "taken out of context" comment, but has not yet received a response.)

Some might argue that she cares what people think, because why else would she announce a break during a time where she is being judged? It definitely seems like the scrutiny and her break go hand-in-hand, especially since she said "it doesn't seem worth it anymore." The Confident singer may very well be referring to recent events.

Even celebrities (who endure a lot of harsh criticism) can only take so much hate thrown their way, so if this is why Lovato is taking a break, it makes sense. It wouldn't be the first time she went behind closed doors after facing negativity.

In July 2016, she announced she was quitting Twitter after encountering too many trolls. Obviously, that didn't last, because Lovato is back on the social media network, but at the time she announced, "Damn I gotta quit sayin sh*t. Bye Twitter. I like snapchat cause I don't have to see what some of y'all say. Follow me if you want: theddlovato." She continued, "But why do people actually give a f*ck what I say?? like if you don't care the gtfo haha. And people wonder what's wrong with the world. Pay more attention to good than bad."

That response sounds awfully similar to the her comments regarding the Glamour interview, so maybe she really is bowing out because of others. If this break is anywhere near similar to her quitting Twitter, then that also means there is a good chance that Lovato won't be taking too long of a break.

Another reason for her news is could be that Lovato has had quite the busy 2016, which has included a tour with Nick Jonas, the release of new music ("Body Say" came out in July), and campaigning and endorsing Hillary Clinton as the next POTUS. When you're that busy and touring all over the world, you probably need some rest. If that's the case for Lovato, I certainly can't blame her.

I highly doubt this is a permanent break, especially since Lovato has worked extremely hard to make herself a success — and she's returned from breaks before. It'd also be unfortunate, because she truly is talented.