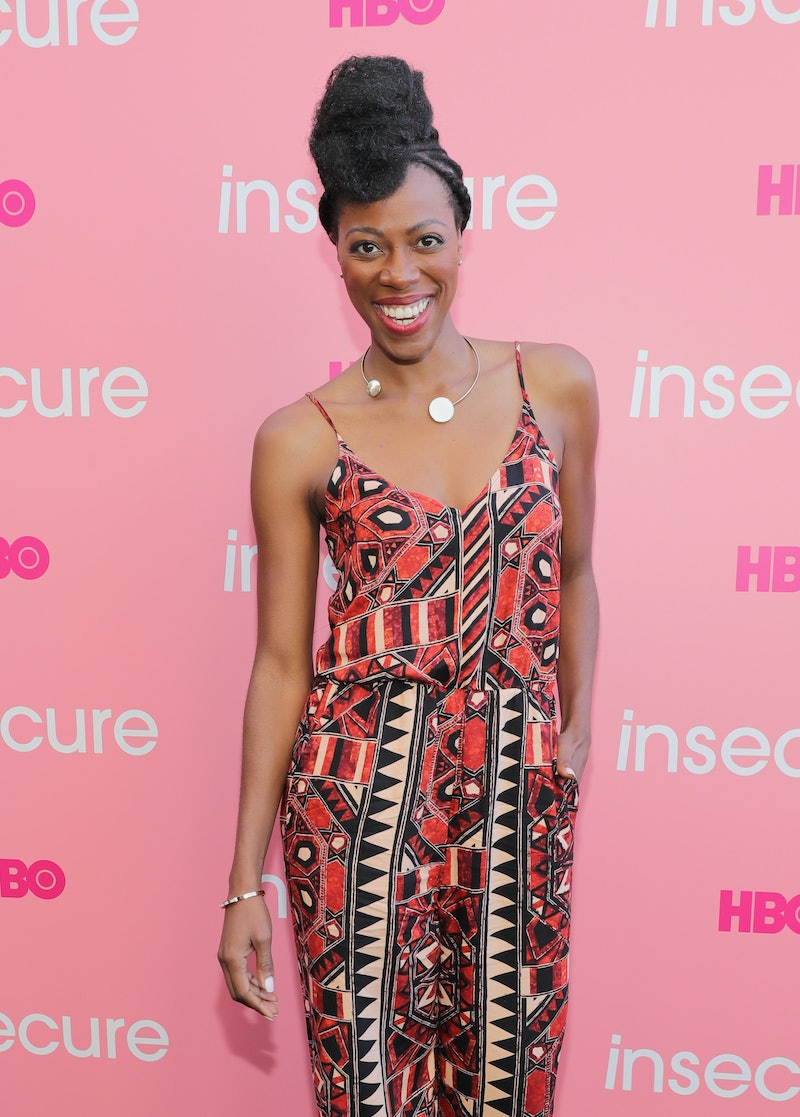 On HBO's Insecure, Yvonne Orji's Molly is introduced as Issa's best friend whom everybody adores — even though her love life is in shambles. Outside of her character, the actress seems just as worthy of adoration, so you should probably learn about Orji from Insecure before the comedy officially premieres on Sunday, Oct. 9. Although you may have never heard of her before this new series (created by, and starring, Issa Rae), Orji has a pretty good reason for why her IMDb page isn't super robust and she has actually leveraged her past experiences to help her get where she is today.

Insecure first introduces Molly as a competent woman with a high-powered job. White people and black people alike love her, lead character Issa amusingly notes in the series premiere, but Molly — and her vagina — are depressed about her unsuccessful attempts at dating. Thankfully, she has best friend Issa to talk to, even if Issa isn't always as supportive as she should be. In real life, Orji was on a path to become a medical doctor, but the opportunity to be in a beauty pageant changed that. Her parents weren't initially happy about this life change, but you certainly will be once you see Orji portray Molly on Insecure.

As NPR's Code Switch highlighted, Orji was born in Nigeria to Nigerian parents and moved to the U.S. when she 6 years old. For the segment "Fresh On The Screen: How TV Is Redefining Whom We Think Of As 'American,'" the actress, writer, and comedian explained her life growing up as a first generation American with African parents, saying, "From the time I was born, I was supposed to be a doctor."

In the above video, Orji explains that while she never really questioned being a doctor, she was more skilled when it came to reading, writing, and speaking in school — but that didn't stop her from earning a bachelor's degree in sociology and a master's degree in public health from George Washington University. Yet, when she was asked to apply for the Miss Nigeria in America Pageant and didn't have a talent for the talent portion, her ambitions changed. The religious Orji (her Instagram profile says, "Jesus & I roll tight") prayed to figure out what her talent should be and said she heard, "Do comedy." She created a stand-up routine for the beauty pageant and with that, her career goal changed.

Orji told Ayiba magazine that it wasn't an instantaneous decision for her to pursue comedy and although her parents were devastated by her decision, she eventually moved to New York City where she started her own open mic club and joined an acting troupe. Her hard work paid off when in 2011, she got offered an internship in the writer's room for the TV One series Love That Girl!, starring The Fresh Prince of Bel-Air 's Tatyana Ali, and she moved out to Los Angeles. Along with writing for the show, she also portrayed the character Njideka in one episode.

One of the producers on Love That Girl! heard her story of how she became a comedy writer and actress and encouraged her to write about her life. Orji came up with the premise for a show inspired by her experiences, First Gen, which she filmed a trailer for in 2015 and posted it to YouTube. The trailer was created to generate interest in the show and though she has certainly been busy since she filmed it, she told NPR it's still a goal of hers to actually create this series about growing up in America with immigrant parents.

As for how she landed her role on Insecure, she told Interview magazine that she met Rae in 2012 in Los Angeles and they had mutual respect for the work they were each doing. When HBO decided to move forward with the pilot for Insecure, Rae called up Orji and asked her to audition for the role of Molly — and the rest is history that should make both of them feel pretty secure.

Orji's story is a pretty inspirational one and knowing how hard she has worked to get to this major moment of starring on a TV series makes watching her on Insecure even more enjoyable. You can check out how far she has come from her medical doctor days when her and Rae make you laugh during Insecure's premiere on Oct. 9.

More like this
UK Viewers Will Have To Wait To Watch The Handmaid’s Tale S5
By Maxine Harrison
Molly-Mae Hague & Tommy Fury Celebrate Pregnancy Reveal In The Sweetest Way
By Sophie McEvoy and Sam Ramsden
Jonathan Bailey’s BTS ‘Bridgerton’ Photos Celebrate 6 Months Of “Kanthony”
By Stephanie Topacio Long
'Grey's Anatomy's New Intern Got Advice From Dr. Bailey Herself
By Grace Wehniainen
Get Even More From Bustle — Sign Up For The Newsletter