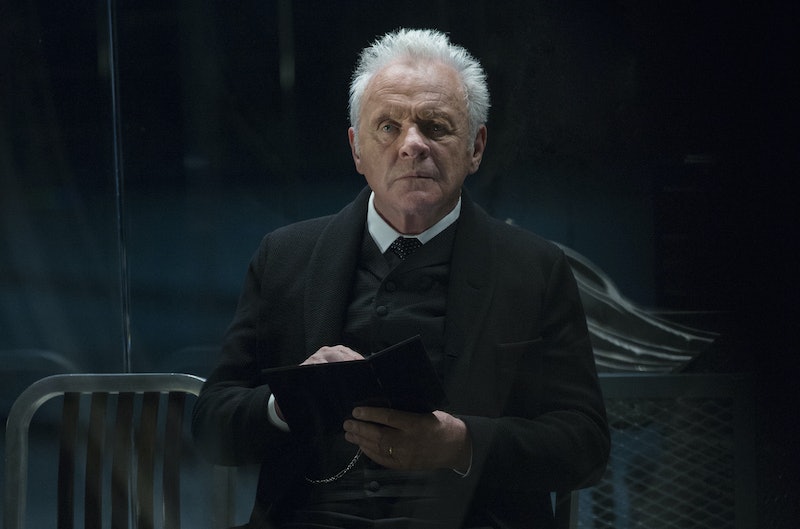 "Shall we drink to the lady with the white shoes?" Bill, the second host ever to be built, asked as he toasted his creator in the series premiere of Westworld. And with a simple turn of phrase, Westworld theories about the lady with the white shoes started. While you probably had enough to think about after watching HBO's expansive remake of the 1973 Michael Crichton film of the same name, some people may have noticed the outdated host repeating a line about a lady with white shoes to Sir Anthony Hopkins' Dr. Robert Ford. As Westworld is sure to unveil secrets of the amusement park world and beyond, it's anyone's guess right now if Bill's line was just the ramblings of an old man android or if it will have a deeper meaning as the first season of Westworld continues to unfold.

If you need a refresher of the scene I'm referring to, Westworld employees Bernard Lowe and Ashley Stubbs had come across the creator of the park, Ford, drinking with one of his older cowboy creations. As they approached, Bill's voice could be heard saying:

"Here's to the lady with the white shoes. Take all your money, drink all your booze. Ain't got a cherry, that ain't no sin. She's still got the box that the cherry come in."

Oh-ho, those Wild West men sure know how to compliment a woman as this crude cheers shows. Afterward, the pair of creator and android continued to slug down the shots with Bill repeating phrases from his better Westworld days like, "The old coffin varnish" and "They don't make them like they used to." And because of that, my drinking buddies, I'm here to offer the slightly disappointing interpretation that Bill's "lady with the white shoes" might not have any deeper meaning beyond it offering a juxtaposition of how far Ford's androids have come.

The saying that Bill refers to twice is actually a variation of a decades-old toast, according to the Los Angeles Times. Just like Ford had to go into the bowels of his creations to dig out old Bill, I scoured the depths of the Internet to find the origins of Bill's toasts. And yes, Bill's off-color line about a lady and her euphemistic cherry is indeed a known toast. The one major difference being that most of the versions of this cheers that I found had the lady in red shoes — not white ones.

I found variations of this toast (most the time it's a "girl" with "little red shoes") quoted on Shots from the Bartender blog, the Insultants blog, eBaum's World, and Cheezburger (I told you I went into the belly of the Internet beast). Two more variations also exist in the book Toasts for Every Occasion , but they reference a "girl in the high button shoes" (that seems particularly appropriate for Westworld) and a "girl in the little green shoes." Only one website, MetaFilter, had the toast use "white shoes" and the person who posted that version claimed it was a toast that was "especially good at weddings." (Errr, not so much unless you want to be punched by the bride.)

While it is intriguing that Bill uses "white shoes" for his drinking toast when it doesn't seem to be the standard phrasing, I am still inclined to think that Bill's presence was more of an example to show how far the hosts have come over the years due to upgrades. Ford said the older hosts like Bill were discontinued because of their glitches and penchant for repeating themselves and it's in stark contrast to Evan Rachel Wood's Dolores — the original host who inspired the premiere episode's title. She has been able to be upgraded throughout the years, but Bill is from a bygone era of Westworld.

Considering the second host must have known the original host, if Bill's words do have a hidden meaning, then there is one obvious front-runnner for the lady he could be referring to — Dolores. Although, it must be said that Wood's character Dolores has certainly not been wearing white shoes as of yet as this photo below shows.

Vulture's theorizing of the question of who is the lady in the white shoes was:

"Is it Dolores? Perhaps. Is it just a meaningless fragment of Old Bill's past life? Might be. But it's worth bearing in mind their age: Bill was the park's second host, Dolores the first. In Westworld's Garden of Eden, there'd be no Adam without Eve. And Dr. Ford may wind up reaping what he sowed."

This idea of Westworld exploring the relationship of the original hosts definitely has some potential as Dolores may start forming memories and becoming more mindful of what she truly is. And in that way, Bill's toasts may not just be mechanical responses, but a hint about Dolores — or even an entirely different character that hasn't been introduced yet.

Since I in no way intend to underestimate Westworld since I feel confident that the series will continue to subvert my expectations like the premiere did, I will concede it wouldn't be wholly surprising if the lady with the white shoes did end up being a reference to something else. Yet, with the series having so many other questions to answer, don't be too disappointed if Bill's toast is nothing more than a relic of the past — just like he is.

More like this
UK Viewers Will Have To Wait To Watch The Handmaid’s Tale S5
By Maxine Harrison
'The White Lotus' Season 2 Finally Has A Release Date
By Bustle Editors
These Memes & Tweets About Alicent in 'House Of The Dragon' Prove She's The Queen Of Messiness
By Grace Wehniainen
How Much Are The 'Schitt’s Creek' Stars Worth?
By Hugh McIntyre
Get Even More From Bustle — Sign Up For The Newsletter