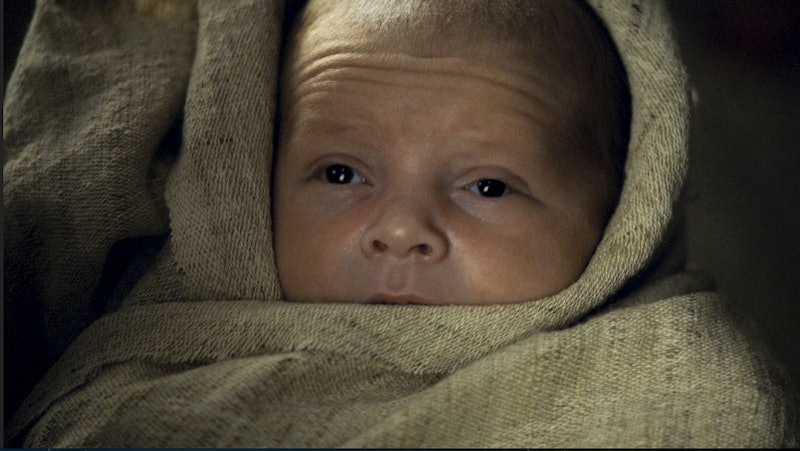 Season 7 is truly going to be the beginning of the end for Game of Thrones. In all likelihood, many of the mysteries of the series are bound to be explained, and the magic and battles to come will finally be revealed. If we're lucky, some of fans' endless questions will be answered by the potential appearance of Rhaegar Targaryen in Season 7 of GoT. There is so much mystery behind the Targaryen family and yet they are the key to a lot of the perils and dramas of The Seven Kingdoms. The family who can withstand fire and control dragons probably has some sort of deeper purpose viewers should witness, and actually getting a glimpse of a Targaryen, specifically the one who jump-started a huge war that devastated his family, would explain a lot of things.

Yet while it would be nice if we got to meet Rhaegar, what clues are there that the indigo-eyed crown prince will appear in either Season 7 or Season 8? Right now, pretty much all fans have to go on are castings, foreshadowing, and story structure. We can't be certain we're going to get some Rhaegar action, but it certainly seems likely. The following are some clues that we will meet Daenery's brother and Jon Snow's father, Rhaegar Targaryen, in Season 7.

1. There's A Guy Cast In Game of Thrones Who Could Totally Be Rhaegar

As soon as musician Devin Oliver shared a photo of himself on his personal Instagram with the caption, “I may or may not have made an appearance in Game Of Thrones season 7,” fans began to speculate that the blond singer would be playing another blond singer, Rhaegar Targaryen. However, Oliver could also be playing a young Maester Aemon, an even earlier Targaryen flashback, or simply a background actor musician performing at an event. GoT is popular for including artists in pivotal scenes, so it really wouldn't be a surprise. But how cool would it be if Oliver was playing Rhaegar?

2. We Know Who Jon Snow's Parents Are So It's Only A Matter Of Time

Would the writers of GoT really drop the parentage bomb if they weren't then going to let us meet Jon's parents? That's just bad storytelling.

The boy is seriously addicted. He just can't stop himself from sinking into a trance state. Chances are, Bran's addiction to power and truth will be useful for fans and we'll get to see a solid Rhaegar scene.

4. We Haven't Seen A Daenerys Flashback Yet

We've seen quite a few flashbacks on Game of Thrones — Cersei, the Starks, some "Tower of Joy" action — so isn't it about time for a Targaryen flashback? According to the HBO post-episode special Inside the Thrones, each flashback has been handled very critically because showrunners David Benioff and D.B. Weiss believe the trope is a "hallmark of lazy storytelling" but the "history of this world is so important to understanding the world and to understanding why the characters are motivated as they are and to where they’re headed." What better time than Daenerys' jump to the throne to show some old-school Targaryen family home videos?

5. There Was Some Foreshadowing Via Littlefinger

In Season 5, Littlefinger mentioned a very specific Lyanna and Rhaegar moment, or as he called it, when "all the smiles died." In his story, Rhaegar Targaryen gave Lyanna Stark — and not his wife Elia Martell — a blue winter rose at the tourney at Harrenhal. This was the event that incited the abduction of the teen Stark and the downfall of the Targaryen dynasty. We've already heard the story, much like we'd already heard a version of the "Tower of Joy" story before we saw it in Season 6, so it stands to reason we'll get a visual in the next season.

6. Dany Has A Rhaeger Vision In "A Song Of Ice And Fire"

When Dany's chillin' in the House of The Undying in the HBO series, she mostly just hangs out with Drogo and their baby Rhaego. But, in the book version, she sees Rhaegar holding his son Aegon, saying, "He has a song. He is the prince that was promised, and this is the song of ice and fire. There must be one more. The dragon has three heads.'' The time is still ripe for Daenerys to have a dream brought on by PTSD from the House of the Undying. I would definitely accept a fever dream version of Rhaegar.

7. There's A Whole Theory About How Rhaegar And Lyanna Met

In Martin's A Song of Ice and Fire series, we learn about the "Knight of the Laughing Tree," a mystery knight who behaved awfully like a woman in disguise at a Mad King-sponsored tourney. After the knight's joust against Howland Reed, Aerys Targaryen was infuriated and sent his brother, Rhaegar to find (and maybe kill) the peculiar knight — but Rhaegar came up empty-handed. The idea is that Lyanna Stark is the mysterious knight and though Rhaegar did find her in the woods, he refused to turn her in because the two immediately fell in love. If this theory is true, there's no doubt Rhaegar and Lyanna had a romantic first meeting, which fans will need to see happen.

The appearance of Rhaegar would most likely clear up any questions fans have about the Targaryen birthright, the Lyanna and Rhaegar combo, and probably a lot more. I'm ready for some Rhaegar because "a Targaryen all alone in the world is a terrible thing." At least if we know a little bit more about the Targaryens, it won't feel like Daenerys and Jon Snow are both so separate and alone in Season 7.