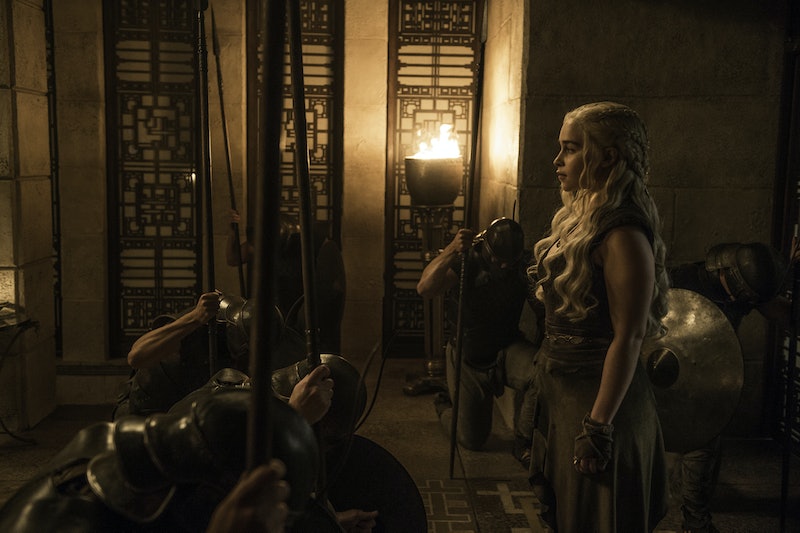 For the first time in the show's history, every single audience member is about to go into a Game Of Thrones season finale completely blind. The past five years, fans who had read George R.R. Martin's A Song Of Ice And Fire series knew exactly what would happen: That Dany's dragons would be born, that Tyrion would kill Tywin, and that Jon Snow would be stabbed, for example. But, now that the HBO drama has exhausted its source material, no one has any idea what's coming next… except for Daenerys Targaryen, perhaps. In fact, something that happened to the Mother of Dragons way back in Season 2 may have spoiled how the Game Of Thrones Season 6 finale will end.

Take a walk with me down memory lane… and into the House of the Undying, the abode of the blue-lipped warlocks of Qarth. Dany ventured there in the Season 2 finale to find her dragons, which had been kidnapped by the treacherous Pyat Pree. As she wandered through the halls of the magical temple, she was greeted with a series of visions that included a sojourn north of the Wall, a reunion with Khal Drogo and their son… and a glimpse inside the throne room of the Red Keep, which was crumbling into ruins and covered in snow.

It wasn't immediately clear whether this vision was a prophecy of the future or simply a vague and metaphorical warning of some sort. After all, her vision of Khal Drogo can't come true, so why should this one? But given how things are shaping up in Season 6, we may be closer to the fulfillment of this apocalyptic vision than we previously thought.

First of all, the title of the finale is "The Winds Of Winter" — a pretty good indication that the cold season can no longer be classified as "coming," but rather "officially arrived." So we might see the first flakes of snow fall on King's Landing before the credits roll next week. But how does the Red Keep get destroyed? The easy assumption is that Dany will do the destroying with her dragons. But what if someone else — intentionally or otherwise — manages to demolish King's Landing before the Breaker of Chains even arrives in Westeros?

There have been a couple of subtle seeds planted throughout Season 6 that indicate a potentially cataclysmic event in King's Landing: Namely, Bran's vision and Cersei's "rumours." The mental download that Bran received from the Three-Eyed Raven right before his death included a glimpse of the Mad King shouting "Burn them all!" shortly followed by several quick shots of green wildfire consuming some sort of catacomb — presumably the dungeon where the volatile substance is stored, as seen in Season 2. Given that we know Jaime Lannister killed the Mad King before his order could be carried out, this vision of the flames must be of the future, not the past.

Furthermore, it's widely believed that the rumor Qyburn was investigating for Cersei involves the existence of the aforementioned wildfire, which the Queen Mother is planning to use to get herself out of her trial. Now that her plan of demanding trial by combat has been foiled, the theory goes that Cersei will try to use the wildfire to burn the High Sparrow in the sept. Of course, wildfire is known to be extremely unstable — and with veritable lakes of the stuff lying beneath the city, who knows what kind of fiery apocalypse Cersei will unwittingly unleash?

If Dany's vision is any indication, Westeros might very well be a wasteland by the time she finally flies across the Narrow Sea. With the South consumed by wildfire and the North likely overrun by White Walkers, will there even be anything left for the would-be conquerer to conquer?

We'll find out when "The Winds Of Winter" arrive next week… after this Sunday's sure-to-be-epic "Battle Of The Bastards."