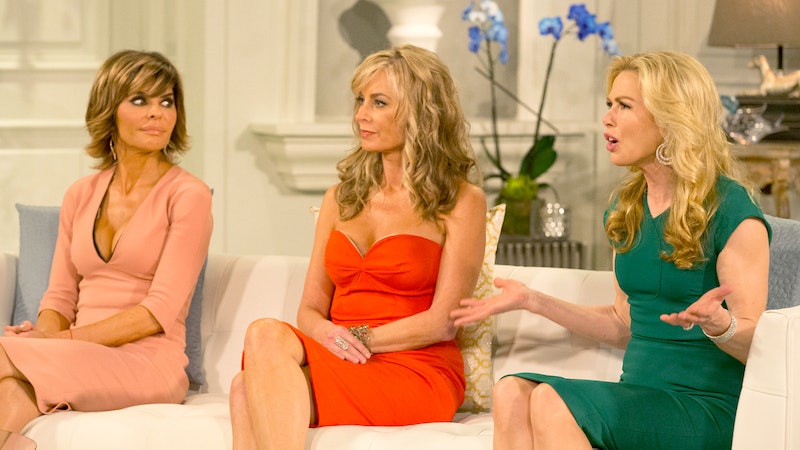 If you are counting down the days until Season 7 of The Real Housewives of Beverly Hills premieres on Bravo like I am, take minute to catch your breath. Even though the premiere date has not yet been announced, filming has already begun — so that means that the Housewives that you love to watch are definitely on their way back to your television screens. And even better, there are already a lot of things we know about Real Housewives of Beverly Hills Season 7. Even though the cast and crew have been relatively mum on what exactly goes down during this season, there have been plenty of posts on social media and leaks to the press that have already happened.

Not that I’m mad about it. Every time even an ounce of information gets accidentally spilled, I do a little Housewives dance and mark it down on the long list of things I’ve found out so far about this new season. And as the women film for longer and longer and the premiere date gets closer and closer, that list of mine continues to grow.

Want to know what’s on it?

Keep reading to find out exactly what we know so far about this new season of RHOBH. The one thing you can definitely count on is drama, but there are other exciting new things in store as well.

1. The New Cast Members Are Causing A Lot Of Drama

I, for one, am always pro-change. But, when it comes to these Housewives, that isn’t always the case. In a recent interview with E!, Kyle Richards admitted that the changes this season are creating quite the stir: "In the beginning, it's always great, and then later, you're like, 'Oh my god, this is a nightmare!'" Sounds juicy and delicious.

2. The O.G. Housewife Is Definitely Back

In a recent video on Bravo’s website, Richards showed off a shot of all the crew at her house. That means she’s definitely back for more drama. As if this O.G. housewife would ever miss out.

3. There Is New Housewife In Town

Dorit Kemsley is reportedly joining the cast in Season 7, and she has already been seen filming for the series.

Eden Sassoon is also reportedly joining the Housewives for a new season of travel, tabloids, and trash talk. And, yes, she is related to that Vidal Sassoon.

Entertainment Tonight reported in September that the whole cast was travling to South Africa for their annual trip. No word yet from Bravo on whether or not this is actually happening, but it would make a great location for a visit.

If South Africa is happening in Season 7, then the women might be making more than one international trip. In a picture posted to Twitter in mid-September, Erika Girardi and Kyle Richards posed at a pool in Mexico. Girardi later confirmed the location when she posted a picture of herself in the same outfit with the caption, “Mexico glam.”

7. Two Of Your Favorites Will No Longer Be On The Show

Sorry to all of you blonde bombshell lovers. Yolanda Hadid and Kathryn Edwards are definitely out for Season 7. However, I’m crossing my fingers that these two fan favorites still might come back and make occasional appearances.

8. Camille Grammer Is Coming Back

It might just be for an episode or two, but she was definitely spotted filming with the cast for Season 7.

Just in case you were worried that her gig on Vanderpump Rules might get in the way of her work on RHOBH, you can all sleep soundly tonight: Vanderpump is definitely coming back for Season 7.

10. There Are Plenty Of Parties

Which, of course, means plenty of drama. The cast posted pictures of a recent Gatsby-themed party that will likely end up on the show.

Nothing has been confirmed officially, but even Kyle is hoping her sister returns to the show. In an interview with E!, the reality star said that her sister thinks “she is returning” to the show, adding that she couldn’t “confirm that,” but that she “would like to see her back.”

So stay tuned, RHOBH fans. This season is shaping up to be one for the record books, for sure.